Results for the 2016 national examinations have been released this morning – girls have performed better than the boys both in Primary Leaving Examination (PLE) and Ordinary Level examinations.

According to examination results released by Ministry of education today, of 187.139 pupils who sat for national exams, 169,742 passed, representing 85.4 per cent. The girls represent 55.28 per cent, compared to 44.72 per cent boys.

This is a second win by girls in two years. In 2015 National examinations, girls also excelled with 54.67 per cent against 45.33 per cent of boys.

In PLE, girls outshined boys not only in overall figure of pass rate, but also on the list of top 11 nation – wide.

Girls performed better than boys in Mathematics with 32 candidates against 28 boys in top 60. They are also leading in languages. Boys dominated in Sciences and Social sciences.

However, if first division in PLE is considered, boys kept leading with 57.43 per cent compared to 42.57 per cent of girls. Boys were on top even in year 2015.

The list of top 11 includes candidates from all provinces and city of Kigali, except Western province.

Reacting on the girls” performance, Janvier Gasana, Director General of Rwanda Education Board said, “Education is evolving since girls are showing high potential to compete with their male counterparts.”

Gasana believes the country is meeting its target of promoting girls’ education.

For the Ordinary Level, there was a total 89,421 candidates and 79,655 candidates representing 89 per cent passed.

However, as far as the list of best students in the country is concerned, top ten candidates are all boys.

Mico Sother and Aimée Cesaire Mugishawayo both from Nyarugenge –  City of Kigali were first and second on the list of top ten, followed by Mucyo Aimé Christian  from Gasabo and Ishimwe Pacifique of Kayonza – third and fourth respectively.

In O-level, despite girls leading in general pass rate, boys dominated the list of top students in almost all disciplines, except languages.

Meanwhile, students can access their exam results on phone. For Primary, candidates can write;  P6 – index number and send SMS to 489.

For O-Level, a candidate will write S3 – Index number and send SMS on 489.

Students can also check for the schools they have been admitted to from January 15 on www.reb.rw 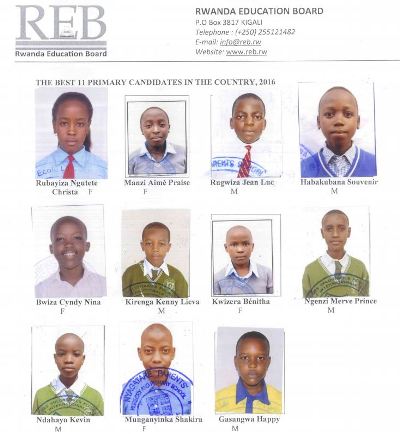 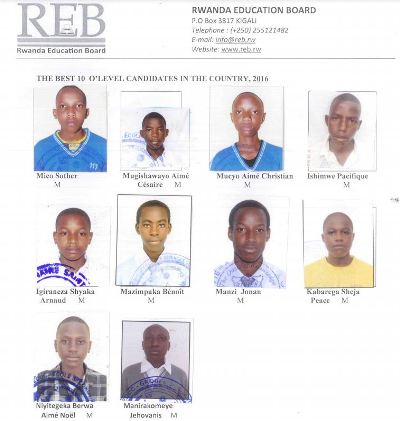