End of Era as Body of Ex-Rwanda King Arrives Home 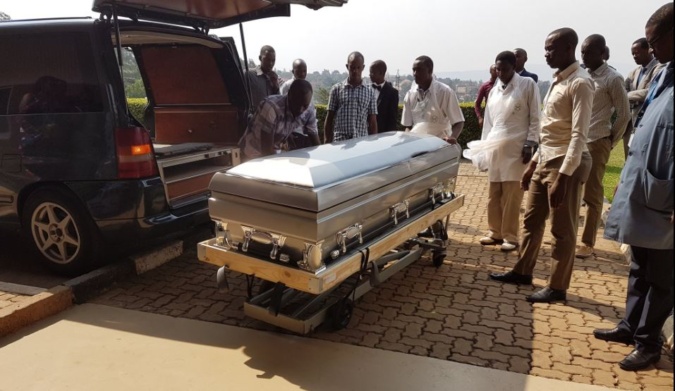 The Body of Kigeli V Ndahindurwa, the last king of Rwanda has finally arrived in Rwanda for burial after several weeks of disagreements between family members on where to bury the deceased King.

Aboard Ethiopian Airlines passenger plane the King’s casket landed at Kigali International airport at 12h45, from United States of America.

Kigeli’s body was escorted by his family and received by Minister of Sports and Culture, Julienne Uwacu, and the Rwanda Patriotic Front (RPF) Inkontanyi party Secretary General Francois Ngarambe, James Vuningoma, the Executive Secretary of Rwanda Academy of Language and Culture (RALC) and other dignitaries.

The king died on October 16, 2016 and the court in the US recently ruled on the decision of having his body buried in Rwanda after a tight lawsuit battle among close and distant families over the choice of place to bury the deceased King.

The body was carried to King Faisal hospital mortuary in Kigali, while waiting for burial arrangements which will take place in Nyanza district in the southern province – the ancestral resting place for Rwandan Kings.

Speaking to media, Vuningoma said it is part of Rwandan culture to uphold solidarity and togetherness in hard times and the government has played a big role in having the king’s deposed within cultural guidelines.

“It is a great achievement for the family and country to have the body buried in Rwanda and it would have been absurd for our former king to be buried outside,” he said.

“As government we have been waiting for this and it has happened. His body deserves a decent burial in our tradition and culture.”

Kigeli was the last ruling King (Mwami) of Rwanda, from 28 July 1959 until the overthrow of the Rwandan monarchy on 28 January 1961.

Some of the family members of the late king