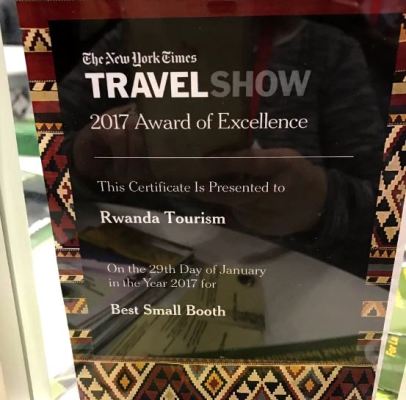 Rwanda is considered a wonderful destination tourists can quietly escape to and enjoy a great experience of pristine nature.

At the 2017 New York Times Travel Show organised today, Rwanda Tourism has been recognised with a certificate ‘2017 Award of Excellence‘ –  Rwanda put up the ‘Best Small Booth‘ at the show.

The prestigious award is a major boost to the country’s tourism promotion efforts.

Several independent organisations, tourism agencies and individual visitors continue to recommend the East African nation that is home to the world’s only surviving mountain gorillas – Rwanda alone hosts 480 of the 880 population of these massive primates.

The New York show hosts a Travel Industry Conference and exclusive trade-only viewing of 500 exhibiting companies in the Exhibition.