Africa has to mobilise its own resources to finance activities of the African Union Commission to scale back dependence on donor money, President Paul Kagame has told colleagues.

Kagame is in Ethiopia’s capital Adis Ababa where he this afternoon presented a report on proposed reforms that would guide the establishment of a governance system capable of addressing challenges facing the AU. Leaders are holding the 28th Ordinary African Union Heads of State and Government Summit.

Last year during the 27th African Union summit in Kigali, Kagame was assigned by his counterparts to come up with reform proposals for the AU as part of transforming it into a self-reliant continental body by 2018.

In his report, President Kagame said that chronic failure to see through African Union decisions had resulted in a crisis of implementation and a perception that the AU was not relevant to Africans.

The AU is a fragmented organisation with a multitude of focus areas, and with over dependence on partner (donor) funding, said Kagame.

“We cannot leave implementation of institutional reforms to chance or treat it as routine. Both in the Assembly of Heads of State and the AU Commission, the responsibility for delivery of the reform agenda must be clearly assigned,” he said, according to accounts from media reports.

Kagame urged his counterparts to focus on key priority areas with continental scope; realign the AU institutions to deliver against those priorities; manage the AU efficiently at both political and operational levels; and get Africans themselves to finance the AU Commission.

Meanwhile, the AU Commission Deputy Chairperson Erastus Mwencha told media that; “Africa with its own resources, AU must carry all operational costs, 75% of development programs and 25% of peace and security.”

Under the theme: ‘Harnessing Demographic Dividend through Investments in Youth’, the AU’s 28th ordinary session kicks off on Monday.

Rwanda’s First Lady Jeanette Kagame will participate in the General Assembly for the Organisation of African First Ladies against HIV/AIDS (OAFLA). She is a founding member of the organisation. 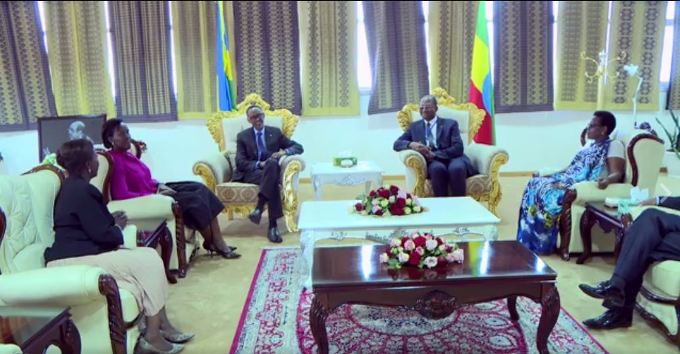