The 30mins That Could Shape Rwanda-Vatican Relations For Generations 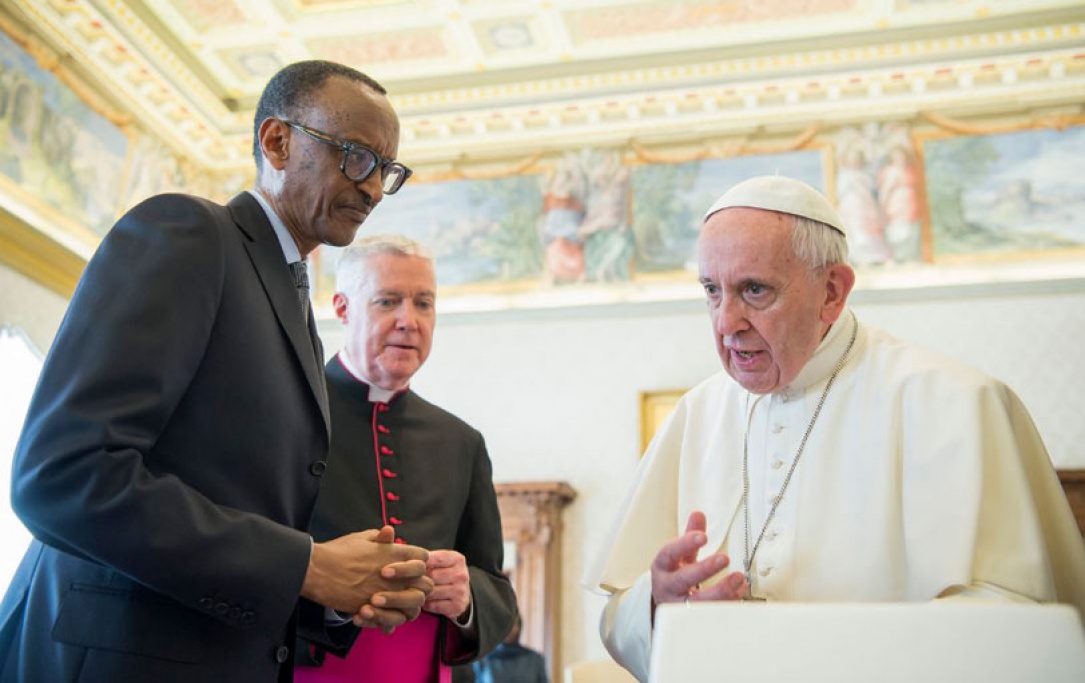 Around 10am (11am Rwanda time), President Paul Kagame arrived at doors of Pope Francis’ office. Kagame, accompanied by the First Lady were received by senior Vatican officials.

As per the elaborate Vatican protocol, President Paul Kagame alone was ushered into the Papal Office where he was met by the smiling Pope. The same exact protocol is what has been accorded to leaders like former US President Barack Obama.

The Kagame-Pope one-on-one meeting lasted for about 30 minutes. The exact words of what the two leaders said to each other may never be known, but judging from what was already on the Rwanda-Vatican relations menus, there was too much to settle.

The Church as an institution helped lay the ground work for the 1994 genocide. Its priests facilitated the hate campaign. And when the dark days of April-July 1994 came, its priests opened church doors for fleeing Tutsi, and then called the killers.

Rwanda is not willing to settle for anything less than a papal apology, like the Pope has with “much less serious” problems such the sex abuse in North America and Australia.

Back inside Vatican City today, after the closed-door meeting, the Pope and Kagame came out. Together with the First Lady Jeannette Kagame, they exchanged gifts. It was followed by a photo for official record for the two sides.

From meeting the Pope, President Kagame was received by the Vatican’s top diplomat, the Secretary of State Archbishop Pietro Parolin. In that meeting, Foreign minister Louise Mushikiwabo was in attendance and Rwandan diplomats accredited to Rome.

Official account indicates that while the official meetings were taking place, the First Lady was given a guided tour of the Apostolic Palace.

Historic as the day has been, it was long in a making. Rwanda has maintained the heat on the Vatican. Today, the message from statements released by either side show they are prepared to move forward.

According to a statement by Government of Rwanda, role of the church was discussed, from colonial masters who had a strong back up of the church – from the time of Mgr Leon Classe to latest cases of Rwandan bishops who were commissioners in MRND, a state party that prepared and committed the Genocide.

After implementation of this ideology, “genocide denial and trivialisation continue to flourish in certain groups within the Church and genocide suspects have been shielded from justice within Catholic institutions,” reads the statement.

With examples and facts through the chronology of all these events, “the Pope expressed his solidarity with the victims and with those who continue to suffer the consequences of those tragic events,” reads a communiqué from Vatican Press team.

The Pope, “implored a new God’s forgiveness for the sins and failings of the Church and its members, among whom priests, and religious men and women who succumbed to hatred and violence, betraying their own evangelical mission.” 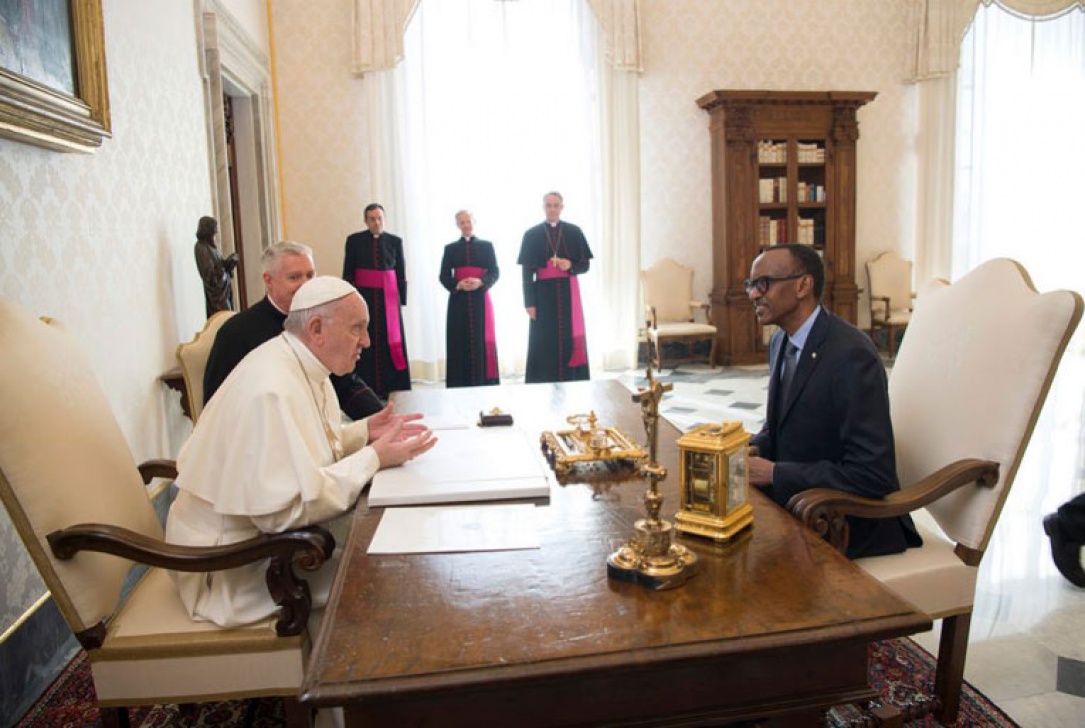 Below is the full Vatican statement about the visit:

Today, Monday 20 March, at the Apostolic Palace, the Holy Father, Pope Francis, received in Audience His Excellency Mr Paul Kagame, President of the Republic of Rwanda. Subsequently, the President met His Eminence Cardinal Pietro Parolin, Secretary of State, who was accompanied by His Excellency, Archbishop Paul R. Gallagher, Secretary for Relations with States.

During the cordial exchanges, the good relations that exist between the Holy See and Rwanda were recalled. Appreciation was expressed for the notable path of recovery towards the social, political and economic stabilization of the country. Likewise noted was the collaboration between the State and the local Church in the work of national reconciliation and in the consolidation of peace, for the benefit of the whole Nation.

In this context, the Pope conveyed his profound sadness, and that of the Holy See and of the Church, for the genocide against the Tutsi. He expressed his solidarity with the victims and with those who continue to suffer the consequences of those tragic events and, evoking the gesture of Pope St John Paul II during the Great Jubilee of the Year 2000, he implored anew God’s forgiveness for the sins and failings of the Church and its members, among whom priests, and religious men and women who succumbed to hatred and violence, betraying their own evangelical mission.

In light of the recent Holy Year of Mercy and of the Statement published by the Rwandan Bishops at its conclusion, the Pope also expressed the desire that this humble recognition of the failings of that period, which, unfortunately, disfigured the face of the Church, may contribute to a “purification of memory” and may promote, in hope and renewed trust, a future of peace, witnessing to the concrete possibility of living and working together, once the dignity of the human person and the common good are put at the centre.

Finally, there was an exchange of views about the political, social and regional situation, with attention to those places that are suffering conflicts and natural calamities. A particular concern was expressed for the large number of refugees and migrants in need of help and support from the international community and from regional structures. 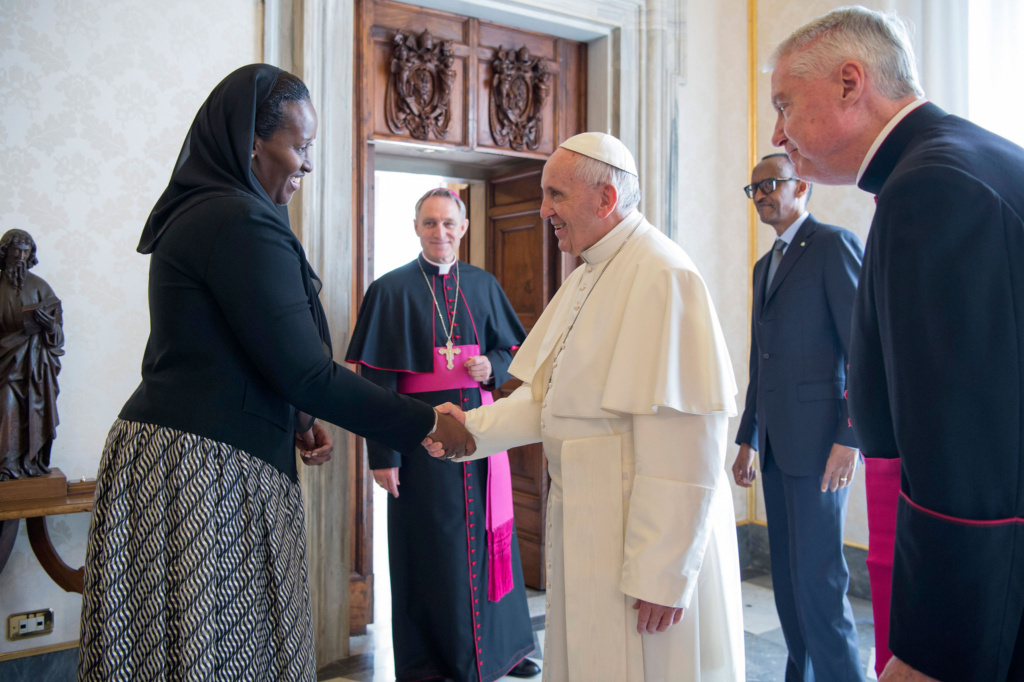 The Vatican statement clearly makes reference to the church and its role in the genocide against Tutsi in Rwanda but previous statements only mentioned Christians and members of the church.

Hours later after the meeting, President Kagame described his discussion with the pope as “an act of courage”.

“Great day/moment and meeting with Pope Francis, new chapter in relations between Rwanda and Catholic Church/Holy See!,”  said Kagame on twitter even tagging the pontiff.

“Being able to acknowledge/apologise for wrongs in circumstances./Cases like this is an act of courage and moral high standing typical @Pontifex….We will all be better for it!”