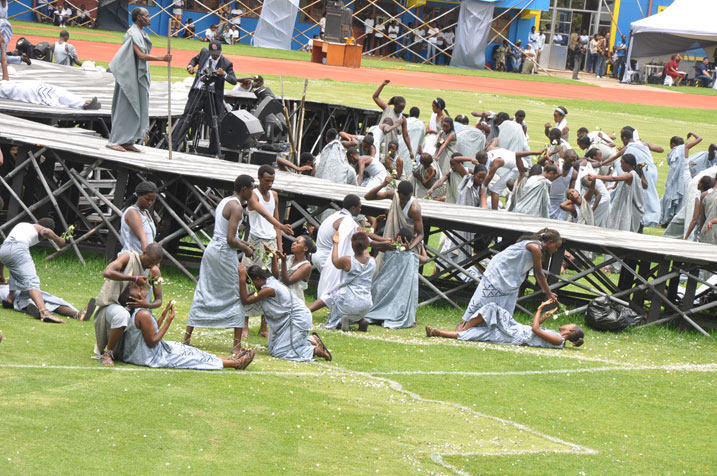 During Kwibuka 20 the youth play a drama ‘Shadows of Memory’ which shows how the genocide ideology invaded the Rwandan society. Among the objectives of Ndi Umunyarwanda is to bring remedy to Genocide ideology

The National Unity and Reconciliation Commission has said that Rwanda has made ‘Ndi Umunyarwanda’ program a tool that will sustain cohesion among current and next generations.

The National Unity and Reconciliation Commission (NURC) made this clarification at time when allegedly some Rwandans want to call it off.

‘Ndi Umunyarwanda’ was initiated in 2013 with a goal to build the national identity and to strengthen solidarity of Rwandan people, uphold their moral and spiritual values by first making them understand their rights as Rwandans.

A research released in July this year by National Unity and Reconciliation Commission (NURC) shows that the program reached 97% of Rwandans.

70% of these testify that the program has changed their mind about seeing themselves through the ethnic identity.

The 1994 Genocide against Tutsi where over 1 million tutsi were killed in 100 days destroyed Rwandan identity and cultivated hatred among people that needed more efforts to rebuild the torn apart society.

Fidele Ndayisaba, Executive Secretary of NURC says that some Rwandans still think that the program was initiated to serve the community for just some time.

“Some people always ask me: Why is ‘Ndi Umunyarwanda’ still there, it should have ended since Rwandans are united and reconciled,” Said Ndayisaba adding “Rwandans should know that the program is for lifetime, not ‘A or B’ option since Rwandans still need it to build more cohesion.”

Ndayisaba was part of a panel discussion on the sidelines of 10th Forum of Unity Club, the organization of former and present cabinet members and their spouses yesterday.

“When Rwanda was being liberated, Rwandans had no confidence in their leaders, but thanks to a transparent leadership Rwandans are proud to be called so,” said Julienne Kantengwa a member of parliement.

According to NURC 95.8 percent of Rwandans believe that good leadership contributed to Unity and reconciliation.

However Rwanda is still challenged with the genocide ideology among the youth.

“Genocide ideology is reducing when we look at numbers but it is sad to realize that youth are among those that keep reviving it,” he said.

Records from NURC show that among 304 cases of genocide ideology that were recorded last year, 32% involve children who were below 12 years during the genocide while 3% were not yet born.

This year,  193 cases were filed and more than 50% percent involve the youth.

The First Lady Jeannette Kagame, chairperson of Unity Club reminded members, that though Rwanda made ambitious development and overcame several challenges since the last 23 years, there is no room for relax.

“Though we celebrate achievements, we should not relax and forget that our country went through hardships that almost cleaned it from the map,” she said.

“We should draw lessons into our past experiences and be encouraged to work hard while serving the country.”

The First Lady also said that the uniqueness of Rwanda resides in the way it mysteriously recovered from the genocide and how it applied homegrown solutions through the recovery process.