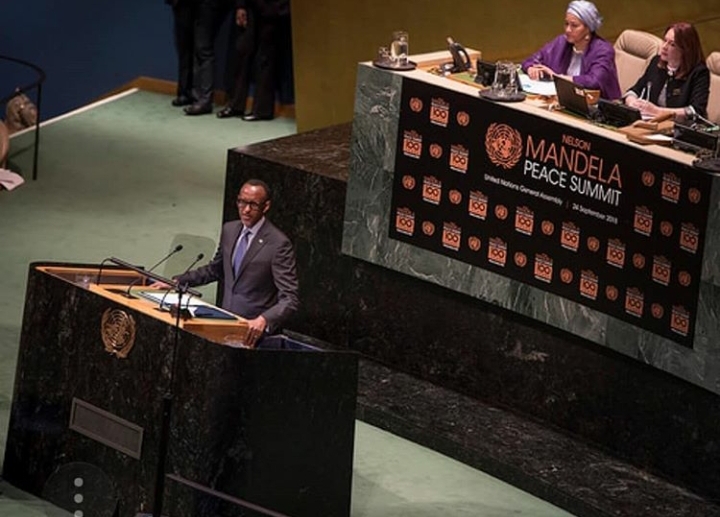 Kagame made the remarks on Monday during Nelson Mandela Peace Summit at the ongoing 73rd United Nations General Assembly in New York – United States of America.

Below are President Kagame’s remarks:

Nelson Mandela’s centenary presents an ideal moment to reflect on the meaning that the legacy of this great African freedom fighter and statesman holds for us today.

Nelson Mandela understood that the politics of confrontation and division impedes a nation’s social cohesion and progress. Even though the wounds were still fresh, he endeavoured to show that the suffering endured by him and countless other South Africans could be re-directed toward building a more positive future for the country.

This was not an easy message, but President Mandela was a true leader and an inspiring communicator. He did what was right, even when it was not popular.

In Rwanda, our tragic history has taught us the importance of unity and inclusivity for reconciliation and nation-building. We work to ensure that all citizens have equal rights and opportunities and are able to participate actively in shaping our country’s direction in meaningful ways.

This approach has allowed us to restore trust in public institutions, and also in each other.

Inclusive and non-sectarian politics is not only advantageous in Africa or in post-conflict situations. As the world has been seeing, national unity is a good thing, wherever it takes hold.

We are fortunate to have Nelson Mandela’s example to keep bringing us back to this fundamental truth.

I wish to thank you all for your kind attention.