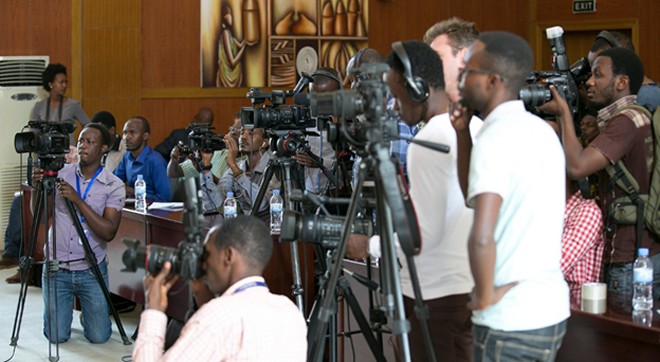 Journalists at a press conference.

In December last year, Rwanda revised the penal code, making a relief for journalists from general defamation which was a criminal offence attracting a jail term of up to one year and a fine of up to Rwf 5 million.

The revised law provided that general defamation could be reported to Rwanda Media Commission – the journalists’ self-regulatory body, but unfortunately provided that cartoons portraying politicians/leaders in unflattering manner will be a criminal offence.

In the freshly gazetted penal code Law No. 68/2018 of 30/08/2018, the Government of Rwanda has officially decriminalized general defamation and press offences in move to respond to journalists’ outcry and respect the press freedom and freedom of expression.

“The Rwanda Journalists Association (ARJ) recognizes this very important step by the government of Rwanda as it is another major reform towards expanding freedom of the press freedom and freedom expression in general,” ARJ wrote in press statement.

ARJ believes that, decriminalizing defamation and press offences is a culmination of many years of advocacy by the media fraternity and dialogue with government and other stakeholders.

Maintaining that defamation is a major ethical breach as even proscribed by the journalists and media practitioners in their code of conducts, ARJ upholds that related complaints should be dealt with by Rwanda Media Commission, the Media self-regulatory body and in other cases by civil restitutions.

“We therefore welcome this part of legislation and call on the public to continue utilizing the so far successful media self-regulation in arbitrating complaints arising from journaliists’ work,” the statement proceeds.

Meanwhile, the association regrets that Article 233 and 236 of the new penal code withheld criminalizing cartooning of politicians/public officials and defamation against the President of the Republic respectively, and committed itself to carry out consultations and seek legal interpretation in regard with “if and how the two articles could affect press freedom and advise members accordingly.