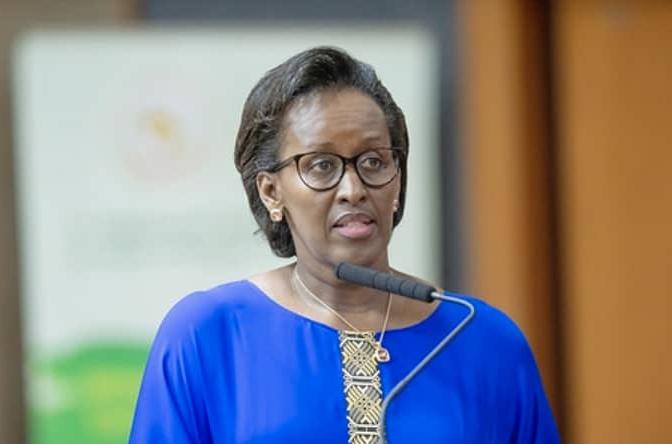 Rwanda’s First Lady Jeannette Kagame has tasked members of the Pan-African parliament to step up against corruption, saying it will save the ‘weak and poor’ in the society.

Addressing 11th Pan-African Parliament Conference on Women’s Rights at the parliamentary building on Wednesday, October 31, the First Lady told lawmakers to demonstrate an urgency and resolve to uproot the social evil that is corruption, by building sound policies and systems, that are grounded in a culture of integrity.

“We know that corruption will not entirely be eroded from our society but the measures we enforce will be so severe that you will think twice before engaging in corrupt practice,” she said.

“This should be your goal in order to protect the poor and weak in society, and salvage our economies,” she added.

Rwanda has been exemplary in uprooting corruption.

The First Lady told lawmakers that in Rwanda, “the priority is to strengthen legal and institutional frameworks and mechanisms that reinforce accountability and ensure that principles of equity and equality are consistently addressed in all areas of our public and private spheres.”

If this is the case, she added, “it goes without saying that women’s leadership plays a vital role in curbing corruption, and securing our economies.”

Referring to several studies, the first lady said that women are less corrupt and that companies with a higher number of women in decision-making perform better in terms of resource management, and maintaining a zero-tolerance level for corruption.

Mrs. Kagame reminded continental lawmakers that the effect of corruption had cut down efforts within young people to work hard.

“To make matters worse, because of the lure of glamour and short-term gains from corruption, some youth see no incentive to work hard and scrupulously.”

The First Lady reminded lawmakers that corruption hinders effective service delivery, especially in the areas of health, infrastructure, water and sanitation, education, and other social sectors, which mainly affect women and children.

As a result, she said, “Corruption further deepens poverty, with the most affected being women, who due to historical factors (including lower education, fewer job opportunities, and unequal pay) are more prone to suffering the negative consequences.”

Indeed, she said according to a recent World Bank, corruption, if unchecked, could reduce economic growth by up to 0.5 to 1% per annum.

“Corruption also discourages investment. No one wants to invest their money where it is not safe.

Corruption takes different forms, presents itself at all levels of society and across sectors, and in both developed as in developing countries. It has dire consequences on the economy,” she said.