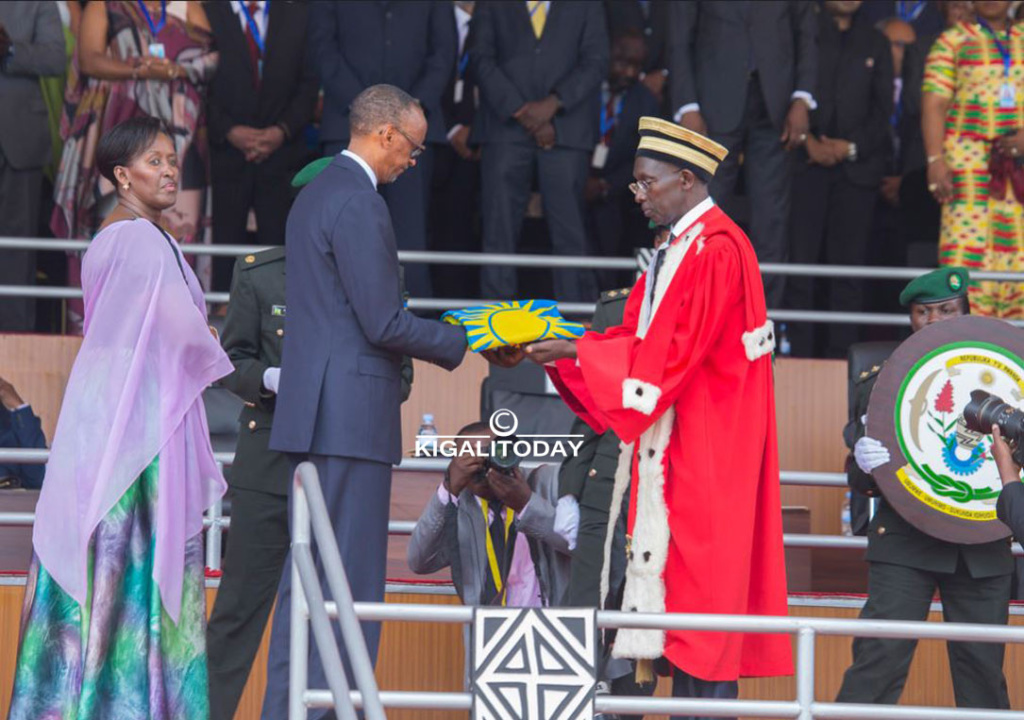 Rwandans will by far remember Paul Kagame’s Friday inauguration as the most organised, glamorous and highly attended event of its kind.

By 7am, the gates of a 25,000-seater Amahoro National Stadium were opened letting in Rwandans and friends. Two Emcees fluent in English, Swahili, French and Kinyarwanda interchangeably moderated the event.

Clouds did not disappoint as the weather was perfect despite flash rains that hit some parts of the country and the outskirts of Kigali the previous day.

A total of 21 presidents arrived one after the other and were guided up to take their seats in the executive wing. There were no protocol incidences.

Parade commander issued instructions in English. The most daring and swift performance was by the color party – a unit of soldiers that delivered and returned instruments of power – their well choreographic performance got everyone in stadium clapping and cheering.

As President-elect stepped out of his Range Rover  SUV, the stadium roared in cheers and he waved back. In just a minute, he was guided to his seat where other heads of state sat.

Subject to protocol, the Chief Justice Prof. Sam  Rugege took to the podium – Reading from a file, he recited a law vesting powers in his office and proceeded to preside over the President-elect oath of allegiance.

Flanked by the First Lady Jeannette Kagame standing on his right side, Kagame raised his right hand while the left hand held onto the National Flag as he read the oath of allegiance;

“ I, Kagame Paul do solemnly

swear to Rwanda that I will:

remain loyal to the Republic of Rwanda;

observe and defend the Constitution and other laws;

diligently fulfil responsibilities entrusted to me;

never use the powers conferred upon me for personal interests;

strive for the interests of all Rwandans.

Should I fail to honour this oath, may I be

subjected to the rigours of the law.

After taking oath, President Kagame appended his signature and was handed instruments of power and later a national anthem was sang before proceeding to inspect a guard of honour – as president of the Republic of Rwanda and Commander in Chief of the of Rwanda Defence Force.

Below is the full speech:

The presence of so many brothers and sisters from around Africa honours our nation deeply and gives us strength. We thank you. Africa has been with Rwanda when we needed you most.

Nothing gives our people greater pride than contributing together with you to the greatness of our continent. Standing alongside us are friends of Rwanda who have always kept our country in their hearts and worked hard to advance it.

I want to acknowledge the leaders and members of the 8 political parties who joined with RPF to nominate me as their candidate. For twenty-three years, we have collaborated with deep mutual respect to repair the social fabric of our devastated nation.

I also congratulate the two other candidates who brought their message directly to citizens. Together, we created a positive environment where no vote was cast against anyone but rather all were cast for Rwanda.

If we always succeed in rallying so strongly around ideas and leadership that work best for all of us it would be a good thing. This approach is not merely a stepping-stone, away from our moment of tragedy. It is truly a privilege and an honour to serve you.

Together we have lived a life, which at every turn has been unexpected, unprecedented and often shocking. We have made progress, thanks to the distinctiveness of our choices and the resilience of our people.

Today, Rwanda defines no one as an enemy, whether domestic or foreign. Every Rwandan has a country and with every other country, we seek partnership and cooperation. Rwanda’s institutions are founded on the common good as it should have been all along. He gains in public services, individual well-being, national unity are now undeniably real.

Every attempt that was made to denigrate the process and glorify old politics of division only made Rwandan voters more defiant. We have had to fight to protect our right, to do what is best for us. We will, without any doubt, continue to do so.

Every African country has to contend with efforts to force us to live on someone else’s terms. They demand we replace systems that are working well for us with dogmas in which their own people are rapidly losing faith.

Africa has no civilization problems, only assets. Sans aucun doute. Over centuries of adversity, our civilisation sustained us. Today, it endows us with ambition, compassion and creativity. Without exception, there is infinitely more that unites us, as Africans, than divides us.

Attacks on our character only make us stronger provided we respond with clarity and conviction. Our experience is that we will be vilified, no matter what. So, we might as well do what we know is right for our people.

Those who are worried about our welfare should feel at ease. We are the best students of our shortcomings. It is no longer business as usual in Africa. There is really no justification for all the effort that goes into cutting Africa off from itself.

There is no single model for nation-building. At the root of any success are good choices built on a mindset: Do It Yourself.

We in Rwanda will continue to be firm believers in real partnership and cooperation with friends around the world.

Verdicts on Sensitive Cases Have to Wait After Judicial Recess