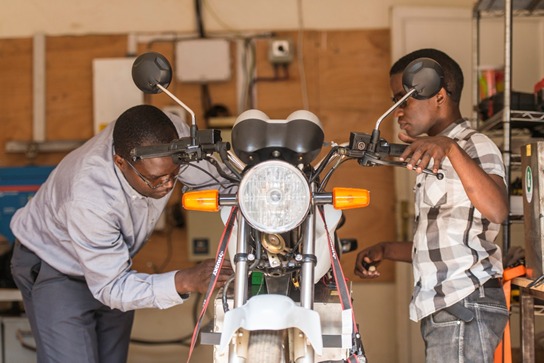 A technician tests the E-Motor wiring

In March next year, electric motorcycle taxis could begin plying Rwandan streets cutting down on the level of gas emissions the country endures due to petroleum burning motorcycles.

Following 3-years of research and road testing, Ampersand – a Germany based electric vehicle company has declared commercial launching of electric motorcycle taxis dubbed E-Moto – the first of its kind in Africa.

Once in operation, the first-ever E-Moto in Rwanda will bring a 75% net reduction in greenhouse-gas emissions compared to petrol bikes, and save drivers up to $900 in fuel costs a year, according to company owners.

“The research and road testing results indicate that e-Moto is effective, strong and money saving compared to the petrol motorcycles including; Indian-made Bajaj Boxers bikes and others,” Josh Whale, Ampersand founder told KT Press in a phone interview from Berlin, Germany.

Road tests also indicated that the E-motor will be able to cover an average distance of 65 km range per charge on a top speed of over 80 km/h with a great force and carrying power, according to Whale.

“This may be the world’s first truly mass-market electric vehicle that’s cheaper and better than its petrol counterpart,” he said.

According to Whale, the biggest opportunity for kicking-off a global mass-market electric vehicle revolution is not automobiles for the middle classes of Europe or Japan, “but inexpensive motorcycle taxis in Africa and other emerging markets.”

According to Whales, E-motor will be sold at around Rwf1.1 million. He, however, added that: “We haven’t fixed the prices, but it will be cheaper than buying the regular motorcycles,” he said.

Meanwhile, the company is working on setting up battery charging stations, installing batteries and working on the charging prices.

CAF CC: Mukura VS Target Victory Away in Sudan