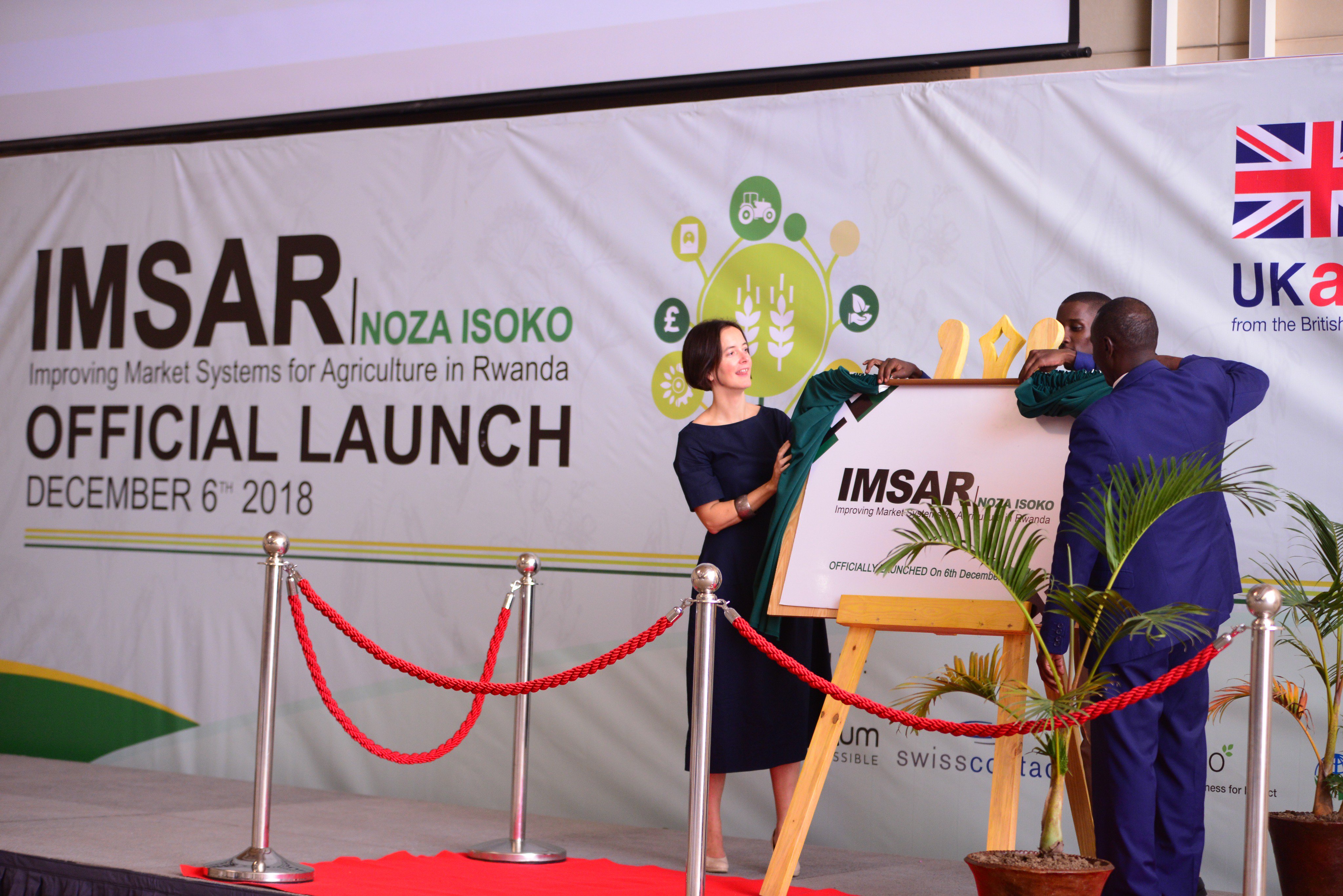 The UK government through its Development Agency (DFID) and Rwanda have launched a 4-year £23.5m programme to stimulate changes in practice among market actors.

With the new programme, Rwanda farmers will be connected to markets through public and private partnership, formal and informal – so that they are able and motivated to perform important market functions effectively.

The fund will help farmers accelerate the commercialisation of agriculture in Rwanda, in line with the Government’s Fourth Strategic Plan for Agriculture Transformation.

The initiative dubbed: “Improving Market Systems for Agriculture in Rwanda (IMSAR), known locally as Noza Isoko, was officially launched by the Director General of Planning in the Ministry of Agriculture Dr. Octave Semwaga and Head of DFID Rwanda, Sarah Metcalf on Thursday.

Through the initiative, improvement, efficiency and inclusiveness of the agricultural markets that matter most to poor farmers will be realised.

The programme, according to Agriculture Ministry officials, will identify market constraints – such as limited access to finance and technology, limited or poor storage, or lack of access to inputs such as fertilisers and develop initiatives to address them.

Speaking at the launch event on December 6 at Radisson Blu and Kigali Convention Centre (KCC), Dr. Octave Semwaga said that DFID-funded initiative is in line with the Government’s vision of boosting agricultural productivity through market value chains.

“Agriculture is a driver of economic growth in developing countries around the world. In 2017, the Rwandan agriculture sector contributed 31 per cent to the GDP and generated $356.5m through exported traditional and non-traditional export commodities,” he said.

“The sector is also key in improving the livelihoods of Rwandans. It employs 58 per cent of the working population, with the majority living in rural areas,” Dr Semwaga added.

The Head of DFID Rwanda said that over the next four years, IMSAR will work with government and the private sector to attract and support investments that drive growth and improve poor people’s participation in these markets, resulting in real, tangible long-term benefits.

“Agriculture has served as the backbone of economic growth and poverty reduction in Rwanda over the last 15 years, for example accounting directly for more than one third of poverty reduction between 2001 and 2011.

It serves as the mainstay of jobs, income and livelihoods for 70% of the population, and generates 30 per cent of GDP and 50 per cent of exported goods,” said Sarah Metcalf, the head of DFID Rwanda.

“What we are formally launching today – Improving Market Systems for Agriculture in Rwanda or IMSAR Noza Isoko, is the UK Government’s contribution to supporting that process of commercialisation through a focus on the private sector,” she added.