One million court cases in the aftermath of the 1994 Genocide against Tutsi, destroyed infrastructure and a society that had fallen apart, Rwanda can now afford to talk about her recovery and an optimistic future during forums and international summits because the country has found a successful exit.

President Paul Kagame who saw the country descending into the abyss 26 years ago and has been contributing to its recovery has told thousands of participants of Vivatech 2019, that Rwanda resorted to unconventional ways to solve problems.

Held in Paris – France since 2016, Viva Tech is an annual technology conference, dedicated to innovation and startups.

In a panel of two, the other panelist being President Macky Sall of Senegal, Kagame gave an idea of how a country can deviate from existing ways of doing things and use unconventional ways to solve unusual problems.

“How do you take a million people through a court process? How many courts do you need, how many years would it take to have justice done?” Kagame said to attract the attention of the audience about the contribution of Gacaca court.

The later was participatory justice which, within 12 years tried more than one million cases, with a budget of $37 million compared to $ 2 billion that was used by The International Criminal Tribunal for Rwanda (ICTR) to try 60 cases.

During the 25 years, Rwanda has also been working hard to improve all sectors that were wanting; from agriculture, education, all cemented by reconciliation to bring the community together.

Of course, Rwanda did not forget social economic development, “Because at the end of the day human beings have much higher aspirations for themselves than that. So, that is now the area that we want to concentrate on,” Kagame said.

The president also said the country embraced ambitious strategies to develop ICT despite the world taking it as ‘crazy’ for a struggling country to focus on technology.

Yet Rwanda was looking afar.

To reach ambitious goals, Rwanda partnered with world renowned institutions that have expertise in several areas that advance technology. 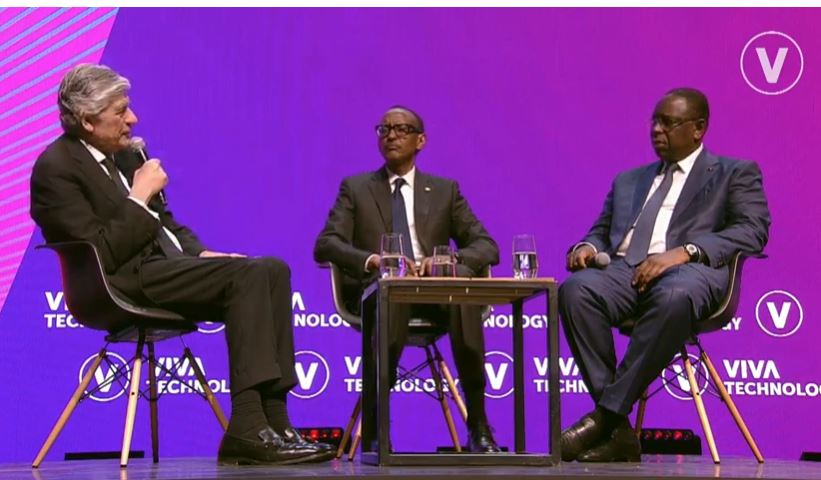 The African Institute of Mathematical Sciences (AIMS) has brought its headquarter to Rwanda since 2016.

Others are Carnegie Mellon University and African Leadership University.

This was to respond to the question of the host who was asking the panelists what is it that Africa and Rwanda in particular is doing to advance technology.

Succesful technology advancement is dependent of three components according to President Kagame.

“We have to make investments – invest in digital Infrastructure, create institutions that help to develop talents(education) and to develop talents and make sure that we avail resources that they can tap into,” Kagame said.

Meanwhile, Kigali innovation city also intends to bring together those who have skills and investors so that knowledge can translate into projects that solve problems in the society.

The host, Maurice Lévy who is Chairman of the Supervisory Board of Publicis Groupe, the world’s third largest advertising and communications group asked his guests,  when Africa would have groundbreaking technology projects like Jack Ma’s Alibaba Group.

“Africa does not just export great football players and musicians. We also have renowned researchers and doctors who give a great contribution to the global arena and Africa in particular,” President Macky Sall partly responded.

On the question, President Kagame outlined a number of projects that Africa has embraced together including Smart Africa Alliance looking at digital economic growths.

He said Africa is more united than ever to achieve high in technology.