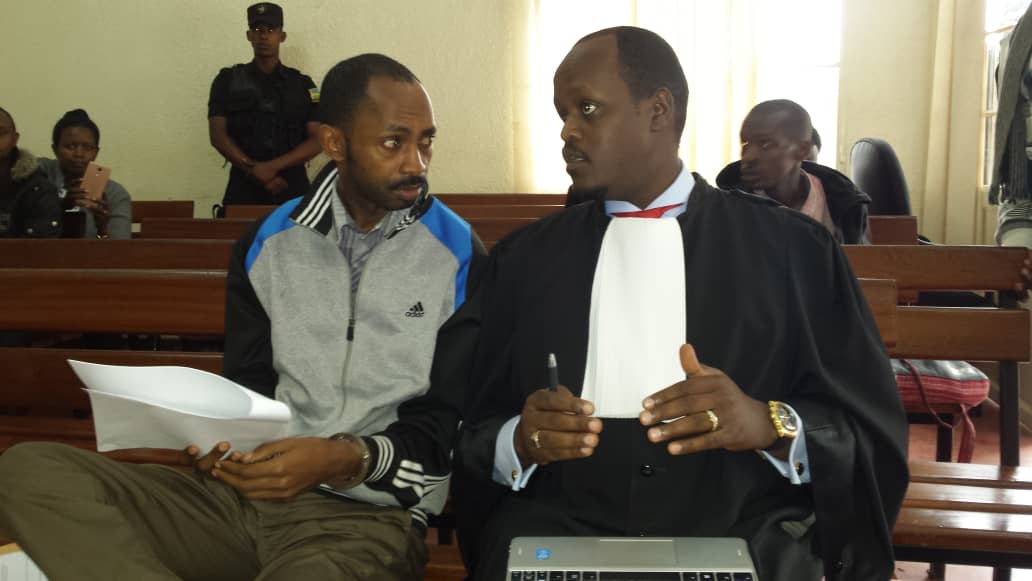 Callixte Nsabimana – the leader of a terror group ‘FLN’ that claimed responsibility of recent attacks in the Rwandan South and Western Province has pleaded guilty to the 16 charges when he was arraigned before Gasabo Primary Court in the capital Kigali.

Nsabimana who appeared in Court along with his lawyer revealed he received support from high ranking intelligence officers in Uganda and Burundi.

On a rainy Thursday morning, May 23, Nsabimana, without his usual sunglasses mark, appeared before Gasabo Primary Court in Kibagabaga, to battle a provisional 30 day detention, requested by the Prosecution.

The arrest of Nsabimana was revealed to the media on April 30 this year by Rwanda Investigation Bureau (RIB).

The suspect is accused of crimes including; formation of terrorism, kidnapping, murder; Genocide denial, armed robbery, arson, forgery and causing bodily harm, among others.

His arrest and court arraignment comes at a time when Rwanda accuses both Uganda and Burundi of harbouring self-exiled Rwandans, seeking to destabalise the country.

The prosecution also told Court that the suspect was spokesman of another terror group; National Force of Liberation (FLN) which took credit for most of the terror attacks mounted on Rwandan civilians in the South and Western parts of the country – killing six people and injuring several others.

“Nsabimana (Sankara) was recorded on radios like BBC and Voice of America, taking credit for these attacks which were also followed by destroying plantations, looting civilian properties, arson and abducting some of them to carry the loots,” Prosecution told the Court.

According to Prosecution, FLN has since been recruiting civilians across Africa, America, Canada; Germany, Belgium, Zambia, Malawi and South Africa and within Rwanda where they attempted to indoctrinate one police officer in vain.

MRCD whose President is Gen. Wilson Irategeka was formed in a coalition of Forces démocratiques de libération du Rwanda(FDLR) operating in DR Congo and others including Nsabimana’s RRM, PDR Ihumure led by Paul Rusesabagina and CNRD Ubwiyunge.

Prosecution listed the countries where Nsabimana prepared operation, meetings with top army officer to get arms, recruitment and soliciting financial support for the FLN terror group, which was acting as a rebellion force for MRCD coalition.

“Donors of this operation included Burundi which gave them a lee way to enter Rwandan territory through the Cibitoki forests while Uganda gave him arms and training of forces in South Kivu,” a prosecutor told Court.

The Prosecutor added that the suspect was receiving at least $1000 per month to coordinate the attack operations.

After listening to prosecution and demand for the suspect to be detained pending an in-depth trial, Nsabimana pleaded guilty to all counts, but told court that he has some clarifications to make.

He pleaded it is true he met with Paul Rusesabagina in 2017 to sign the formation of MRCD and FLN which was supposed to implement hard hit attacks meant to destabilize Rwanda and ensure targeting crucial spots such as weak army and police posts, bridges and major government offices including sectors and cells.

“I confess to all charges even those I was indirectly involved in. But I would like to make this clear – that our operations with army General Bertin (Aka Moses) who is Burundi’s External Intelligence Officer were clandestine and not even the President knew of it,” Nsabimana told Court.

On Uganda, he said that he worked with one Ugandan army officer, Captain Charles Sunday to meet Uganda’s Brig. Gen. Abel Kandiho – head of Chieftaincy of Military Intelligence (CMI) which happened successfully.

“In Uganda, I personally had a solid relationship with the army officials since we had worked with Captain Sunday at RNC. We sent our delegation which was supposed to get armed and political support – which we got,” Sankara said.

He, however, distanced himself from the FLN attacks on five commuter buses on December 15, 2018 in Nyungwe forest, Nyamagabe district which claimed six civilians and several vehicles set ablaze.

“I didn’t give that order. It’s only Gen. Wilson Irategeka who can give that order. For the deceased, I ask for pardon to all victims, all Rwandans and the President. Not even birds in the trees can forgive me, after what I did,” Nsabimana told Court.

His lawyer and prosecution could not agree on if the suspect is released pending in-depth trial date.

Lawyer Moise Nkundabarashi said that his clients’ confession and cooperation has been evident since his arrest. However, prosecution argued that the gravity of Nsabimana’s crimes could jeopardize ongoing investigations if he is released on bail.

Court will convene on May 28, 2019, 3pm to read the decisive ruling on Nsabimana’s bail hearing.