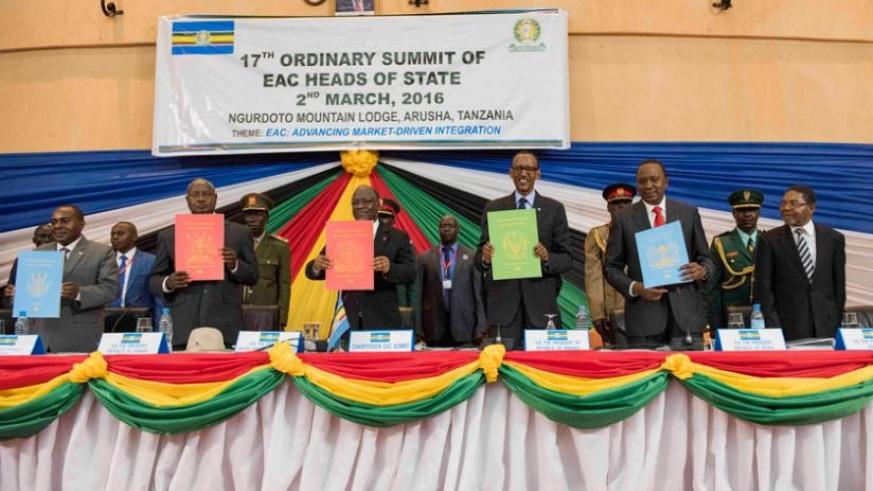 A past EAC summit

The 21st Extraordinary Summit of the East African Community [EAC) Heads of State which was supposed to take place on November 30 has been postponed to a later date in January or February next year.

A letter signed by Rwanda’s Minister of State for Foreign Affairs in charge of EAC Amb. Olivier Nduhungirehe addressed to the EAC Secretary General Liberat Mfumukeko date November 18 indicated that the postponement was requested by a ‘member of the summit’ but added that other meetings should go on as planned.

Two weeks ago during a press conference, President Paul Kagame, who is also the current chairman of the EAC said that despite challenges between partner states, EAC activities would continue as scheduled, expressing optimism that even the Heads of States Summit would take place before the end of the year.

“I have the honour to both inform and request you to notify Partner States that the above mentioned Summit has been postponed to a later date in January or February 2020 due to a request by a member of the summit,” Nduhungirehe wrote.

“A new date will be communicated later after consultation between the EAC Heads of State. However the meeting of all Senior Officials, Coordination Committee and 39th Council of Ministers, as well the Business and Investment Summit shall take place as initially planned,” Nduhungirehe said.

Minister Nduhungirehe on Twitter, responding to a Ugandan news site further dismissed reports that the postponement of the summit has something to do with Uganda-Rwanda tensions.

“Misleading article by @ChimpReports. The #EAC Summit was postponed at the request of another Head of State, with no link to Uganda/Rwanda relations,” Nduhungirehe said

“And I am disappointed to see that a letter addressed to Partner States this morning was immediately leaked to the Ugandan media,” he added.

The letter further indicates that the EAC Secretary General Mfumukeko was in Kigali on November 16 and met with President Kagame who requested him to schedule a one-day dedicated session of the Council of Ministers and heads of EAC Organs and Institutions to take place on Friday, November 29, 2019 in Kigali.

The agenda of the meeting in Kigali will be to review and finalization of the new structure of EAC Organs and Institutions approved by the council of Ministers in October, as well as review the budgeting and recruitment processes.

It will also review the consideration of the administrative and budgetary matters, including the reduction of the recurrent budget and the elaboration of an Administration of the EAC Secretariat Act.

President Kagame noted during the press conference that despite issues prevailing between member states, there is a will across the board to work on integration matters but added that lack of meetings in itself is not a sign that things are not on track.

“But again integration is not something automatic, integration means different entities coming together for a common cause and naturally people will start seeing things differently,”

“It doesn’t matter whether they are right or wrong, that happens, it is natural that people sometimes will bring non issues or create problems where they were not but that is what happens with people and with politics and interests,” he said.

The 20th Heads of State Summit was postponed several times but eventually took place on February 1, 2019 in Arusha with the only Head of State missing being Pierre Nkurunziza of Burundi. The summit happened in what was described as a ‘warm and cordial atmosphere’.