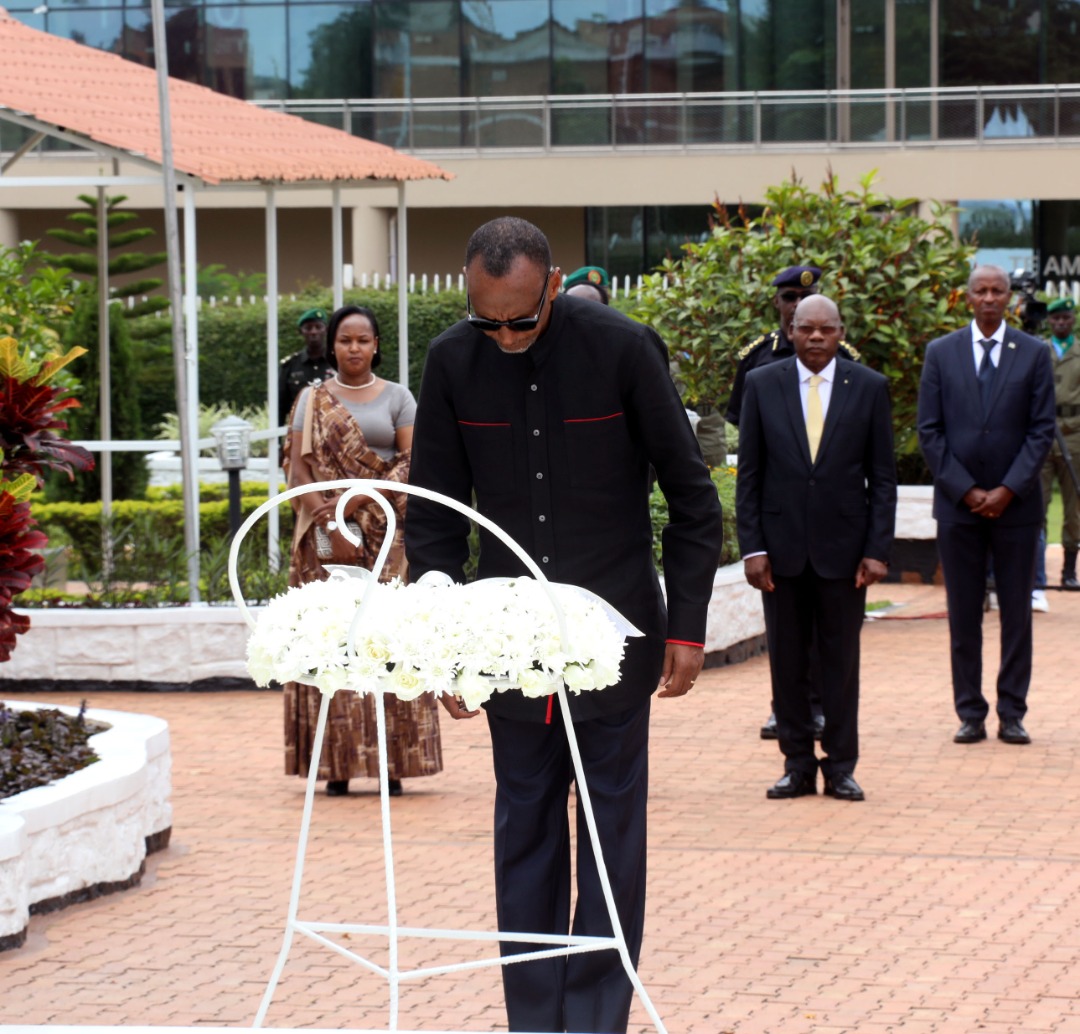 There are few of us who on a tired Monday morning, have not wished for Monday to begin on Tuesday. It is a wish that is granted once a year in Rwanda, when Tuesday becomes the new Monday, another one of the many reasons for Rwandans to be thankful to the many, and varied individuals who are remembered and celebrated on Heroes Day, 1st February. But who are the heroes, and why on the first day of the month of February?

Heroes Day has much to do with Rwanda’s concept of “home grown solutions.” As with every colonised people everywhere, in Africa especially, much of Rwanda’s culture and history were virtually frozen in aspic at a certain moment, to be replaced by versions that suited the colonial interests, or abolished altogether, and confined into oblivion.

This was a brutally logical, practical measure. Historically, and culturally Rwanda was a unified, cohesive nation. With such unity intact It would have been impossible to impose colonial rule. And it would have been equally impossible to plant the seed of genocide ideology into the minds of Rwandans, without diving them along ethnic lines, and dehumanising the intended victims.

The essence of colonialism was to use the power, the control over the colonised, to extract every advantage for the home nations, Belgium in the case of Rwanda. What passed as developed for the colonised, was little more than institutionalisation of this power and control than anything that would benefit the colonised nation.

With the defeat of the genocidal forces of Juvenal Habyarimana by the Rwanda Patriotic Front (RPF) forces, in 1994, the logic necessarily changed.

It was natural therefore that the RPF would look to those elements within Rwandan culture and history, which developed to unite Rwandan society.

Celebrating national heroes is one such “home grown solution.” In ancient Rwanda, the heroes celebrated were individuals who in one way or another, had protected the nation, usually, from an external enemy, by distinguishing themselves in battle.

The most exemplary of such heroes would earn “Uruti” ceremony, Impotore, or umudende. Impotore, and Umudende, would be worn, respectively as a bracelet and necklace, by warriors who had singlehandedly killed a specific number of the enemy, around ten, or fourteen.

Uruti, was a much more elaborate ceremony. The king himself, would convene a meeting, where all gathered would sit around a fire. The shaft of a spear would be lit, and as it slowly burned, the hero’s prowess would be recounted, his praises sung. This would go on until there was nothing left of the shaft of the spear.

Turning his spear into ashes and mere words, however well spoken, might seem an odd way to reward a hero, but it was symbolic. From henceforth, he would no longer need that spear. His deeds forever exempted him from battle, to serve only as military adviser to the King. He would also have the distinction of representing the King, whenever the King might be indisposed.

The honour was reserved for a warrior who had killed at least 21 of the enemy, quite a feat, when warriors were armed with only spears, bows and arrows, with a shield for protection.

It would be resurrected by the RPF led government, for the very reasons it was regarded as harmful to the colonial project, notably, promotion of national unity and development.

Today, Heroes Day is a time for all Rwandans to come together in celebration of individuals who exemplify the best of Rwandan values. Celebrated individuals come from all walks of life, and as used to happen in battle, there are different categories of heroic deeds, from Imanzi, Imena, and Ingenzi. What they all have in common from the highest to the most ordinary, is that their actions were selfless, driven by the good of society.

In addition, the character of the person to be honoured, his or her humanity, honour and integrity, are taken into account, before they are honoured. For Imanzi, the measure of what has to be achieved is so high, that it is always awarded posthumously.

Today, Rwanda has only one Imanzi, Major-General Fred Gisa Rwigema, the first head of the RPF, and commander of its armed forces, then, the Rwanda Patriotic Army, or RPA, the precursor of today’s Rwanda Defence Force, or RDF.

Rwigema is revered not only in Rwanda, but across the region. A PanAfricanist, like so many within the RPF leadership, then and now, he was involved in liberation movements from Southern to East Africa. For a time, he was de facto commander of Uganda’s forces, during the struggle led by current President, Yoweri Kaguta Museveni.

“Heroes Day is not a time for sadness” said Nichola Rwaka, head of research at the Chancellery for Heroes, National Orders and Decorations of Honour, or CHENO, the organisation responsible for investing nominees for the honours, “they live on in their deeds, in the minds of Rwandans.”

“On Heroes Day, we remember and celebrate these outstanding individuals. It is why we have games, entertainment, it is a day to be happy that our nation had such people, and we have their example, especially for our young people.”

Michel Rwagasana, Felicite Niyitegeka, and Agathe Uwilingiyimana, are remembered in the Imena category, for their courage, and eventual self sacrifice, for standing up for the values cherished by all Rwandans.

As anyone who knows the twentieth Century history of Rwanda knows, 1963 was an especially harrowing year, that rivalled 1994, in the genocide against Batutsi, begun in 1959. It was also the year in which Michel Rwagasana, a prominent political figure, was murdered on the orders of his own nephew, then President Gregoire Kayibanda, for his refusal to sign up to the genocide ideology.

As an influential figure identified as a Muhutu, the planners and perpetrators of the genocides against Batutsi wanted Rwagasana to lend weight to their cause. His response was that he would not and could not subscribe to any ideology that sought to divided his society. He was offered inducements of any high office he wished, all to no avail. This principled stand sealed his fate, and he was murdered.

His story is similar to his fellow Imena holder, Agathe Uwilingiyimana was appointed interim Prime minister, under the Arusha peace accord, into which the RPF had entered with the Habyarimana government. When the murders begun in April 1994, Uwilingiyimana, who had stood firm against discrimination directed at Batutsi, was one of the first people to be murdered.

A similar fate was to befall Felicite Niyitegeka. She was one of the few individuals in the Catholic Church, who stood against the massacres of Batutsi. As often happened, when it was discovered that a number of Batutsi had taken refuge in a religious institution, the mass murderers were often sent to find their victims where they had fled.

Niyitegaka’s brother, a colonel in Habyarimana’s army, sent word to his sister, that he would send a vehicle to separate her from the intended victims who had sought refuge with her, and take her to safety. She wrote what is now a famously moving letter to her brother, thanking him for thinking of her, but saying firmly that if he could not save those who had come seeking protection from her, she could do no other than die with them.  When the killers came to take the Batutsi, she would not be parted from them, and was murdered with them.

It is little understood that throughout the 1990s, the RPF was still fighting to secure the country from enemies within and without. With the support of their French backers, many of the genocidal establishment, including the former Rwandan army, and Interahamwe militias, had fled to the Democratic of Congo, then Zaire. From there, they launched murderous attacks into Rwanda.

One of those attacks would be against the youngest recipients of Imena, the Nyange secondary school students, in 1997. The attackers came after dark. Killing the security guard, they moved into the classrooms, and directed the pupils to separate, Bahutu to one side and Batutsi to the other. The students would not obey, replying that they were all Rwandans.

The machine gun wielding attackers opened fire indiscriminately into the students, killing most of them, although miraculously some did survive to recount the horror. It has been suggested that the students were simply repeating instructions from the adult, but this would be doing the courageous young people an injustice.

It was a mere three years after RPF forces had defeated the genocidal forces, and every one of the students understood only too well what was being asked of them. They consciously defied the gunmen, no doubt hoping for the best, but fearing the worst. The students deserve their place alongside among others, King Mutara 111, Rudahigwa.

The King was murdered by the Belgium colonial power, which branded him a communist, for his radical reforms, which included abolition of a system where, for their wellbeing, peasants depended on privileged chiefs. Rudahigwa is also credited with far reaching innovations in agriculture, some of which can still be seen today.

“We are now moving towards vision 2050 in our development. Following the example of our great heroes, every Rwandan is called to try and walk in their footsteps. If you are a trader, businesspeople, sportsmen and women, all can be heroes by performing their duties with integrity, and for the good of the nation. You don’t have give your life to emulate these heroes, you just have to learn from them.”

Global warming allowing, 1st February is a month after the harvests, a month to rest from the exertions of the Christmas and New Year holidays, a month to relax, and celebrate national heroes.

“There is no particular significance to 1st February, a day to celebrate Heroes Day” said Rwaka, “it was decided upon, because it is the most convenient time for people to find the time to mark, and remember the people who sacrificed so much for our nation.”

Ordinary people it seems are called upon to do more than just applaud their national heroes, but emulate these heroes in their own day to day actions.