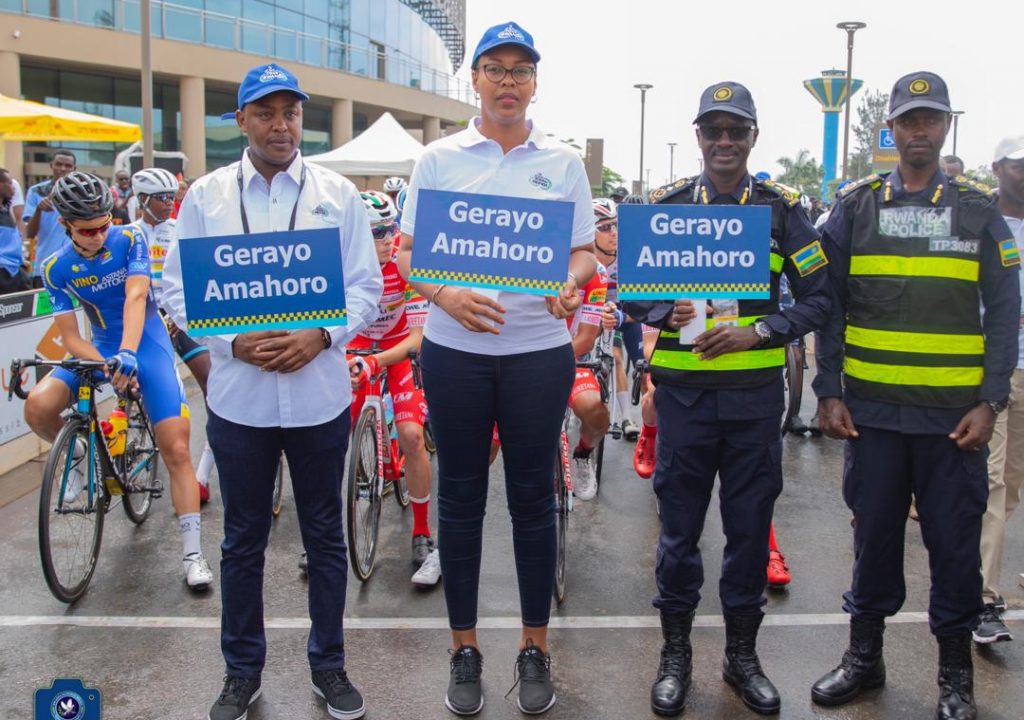 This could probably be the biggest opportunity for Rwanda Police to reach out to massive crowds watching Tour du Rwanda – the most exciting and much followed sport in Rwanda.

Rwanda Police (RNP) and Rwanda Cycling Federation (FERWACY) have entered a partnership to further push efforts to promote Gerayo Amahoro – a road safety campaign launched by the police.  the campaign has been conducted across the country. recently, the shift has been at different religions around the country.

The partnership between police and FERWACY was formalised yesterday, February 23, during the flagging off of the 12th edition of Tour du Rwanda, at Kigali Arena in the capital Kigali.

The launch was presided over by the Minister of Sports, Mimosa Aurore Munyangaju, who was flanked by Commissioner of Police (CP) John Bosco Kabera, FERWACY President Abdallah Murenzi and Commissioner of Traffic and Road Safety, CP Rafiki Mujiji.

Speaking at the event, CP Kabera said that the partnership reinforces other existing platforms to enhance safer ways of using the road, particularly in this period of Tour du Rwanda.

“Road Safety is an important factor for the social wellbeing of everyone and in this particular case, to ensure an accident-free cycling competition,” said CP Kabera.

“Tour du Rwanda will cover all provinces of our country, we urged the general public to bear with temporary road traffic changes, which are meant to ensure a safe race.”

He particularly appealed to spectators to support responsibly by not standing in the road or any other behaviour that can interrupt the competition or worse still cause an accident.

“We wish to remind road users that the 12th edition of Tour du Rwanda started this Sunday February 23, and will end on March 1; riders will use different roads in the City of Kigali and other provinces.  We appeal to spectators and road users to exhibit behaviours that guarantee a safe race,” CP Kabera said.

“During the days of the cycling competition, some routes will be busy and temporarily reserved for riders, which will affect the traffic flow. Motorists are urged to use alternative roads or if not in a hurry, patiently wait until roads are accessible again. Our traffic police officers will be at all junctions to facilitate you,” he added.

He appealed spectators to keep reasonable distance from the road, hold children to prevent them from wandering in the road and avoid littering the road which could cause an accident.

“The competition attracts unusual excitement especially in busy centres along the routes and arrival points… support responsibly while minding your safety as well as the safety of the riders.”