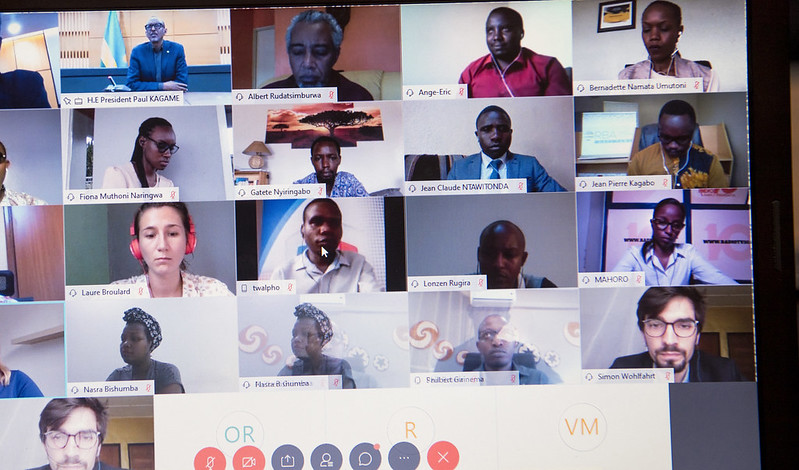 “Judge a man by his questions rather than by his answers.” Not what Voltaire meant exactly, but we learn more about the prejudices of the French News networks represented at Sunday’s press conference with President Paul Kagame, than we do about the subjects they were supposedly addressing.

If journalism were to be erased from our collective consciousness as though it had never existed, we would soon have to invent it. A world without it, is a world where the worst of humankind remains hidden in the dark corners, where it most flourishes. Journalism is necessary.

And it is because he understands this, that President Kagame continues to patiently respond to the kind of questions which pose as journalism, but are often little more than part of a campaign against the government of Rwanda, in particular, that part of it that is the Rwanda Patriotic Front or RPF Inkotanyi.

“I have a question about the death of the singer Kizito Mihigo” begun the journalist for Radio France International (RFI), and Le Monde, “different NGOs have questioned the fact that he committed suicide, and some representatives of the international community have asked for an independent investigation, so I was wondering may be what you can answer to their concerns.”

“Well, it depends what would satisfy you” begun the considered response, “I am informed (that) there have been explanations, not by one person, by many, and on several occasions…”

In other words, the President might have said, that these questions have been asked and answered on several occasions by many, whose responsibility it is to answer them, and nothing he added would convince her of the truth. But he chose a less curt response.

The journalist from France24 wanted to know what “sanctions” applied to people who were detained for ignoring the Covid-19 lockdown measures. “No one has been hanged” quipped the President.

On the surface, there is little wrong with either question, indeed, what would be remarkable would be if journalists did not ask them. But scratch a little deeper, and the questions look intended to perpetuate a perception, rather than truly seek to inform an audience or readership.

It is now two months since the dreadful, tragic death of the musician, Kizito Mihigo, at the tender age of 38. At the time, his death was jumped upon by an unsavoury combination of groups of genocide deniers, genocide sympathisers and self seeking opponents of the Rwanda government. An impressionable character, Mihigo had been coopeted by these groups, in the name of unity among Rwandans.

Realising he was being used by these groups, Yolande Mukagasana, who has published an autobiography, detailing her own survival of the 1994 genocide against Tutsi, and a close friend of Mihigo, tried to advise him to extricate himself from them, but in vain.

“They used him in life, and they are now using him in death” she wrote about the anti Rwanda campaign that is still running, especially on social media.

What is striking about some French news organisations, is the extent to which their stance about Rwanda is almost completely in tune with these groups. At times there seems an almost symbiotic relationship between the two.

It would be unfair to hold individual journalists responsible for a clearly established editorial position, but inevitably, their line of questioning is bound to reflect their media houses’ sustained attempt to paint Rwanda, especially the RPF, in a light that pleases the anti Rwanda forces.

The press conference was held virtually, President Kagame sitting alone in the press briefing room, except for his head of media.

Despite its limited resources, Rwanda has performed admirably, in its response to the Covid-19 pandemic. Yet, the only question the France24 journalist had, was what was being done with those detained for breaking the lockdown measures. Again, on the face of it, a perfectly valid question, until its intent is considered.

For these news organisations, every arrest in Rwanda is deemed controversial, based on the narrative that the government of Rwanda exists only to oppress its people.

And it is as much what these news organisations do not ask as what they do, that shows their true agenda. For a hundred days, since 7th April, Rwanda will commemorate the over a million men, women and children murdered during the 1994 genocide against Tutsi.

For twenty-six years now, France has suffered itself to become a safe haven for a number of these mass murderers, and their supporters. These news networks, some of which supposedly “specialise” in African affairs, rarely seem to regard this as a subject of journalistic enquiry.

In fact, it is now beyond doubt, beyond debate, that the French government at the time, gave so much moral, material and political support to the Rwanda genocidal establishment, it may as well have been part of it.

Yet, twenty-six years later, despite a plethora of undeniable evidence, journalists cannot get themselves to write, or broadcast beyond the mealy mouthed, “Rwanda accuses France of Complicity in the 1994 genocide.” In effect, it is not Rwanda that accuses France, Rwanda merely points to the facts about France’s complicity. It is those facts that accuse France. This too is rarely a subject of journalistic interest, it seems.

It would be an abysmal world, if a death of young man in a police cell were not a subject worthy of journalistic interest. But the reality is that Mihigo’s tragic death has been seized upon as a convenient political tool. Every detail of Mihigo’s sad last days was published by the Rwanda Investigations Bureau (RIB), every question answered.

All that remained was the insistence, driven by the anti Rwanda narrative, that because it was Rwanda, Mihigo’s death must have been a result of foul play.

And President Kagame is right of course, not even if the heavens were to declare it, would these forces be satisfied. His death was useful to them, and they will play it to the last. The question to any news organisation worthy of the description, is why echo such voices.

And the sanctions against those who still seem to imagine themselves immune to Covid-19 infection? As happened recently, some are sat on a patch of grass, two metres apart, and lectured by the Police, before being sent home, and instructed to stay there.

Those who can afford it, are fined, around Rwf 25,000, around $25. It is something of a headache for the authorities that many of the miscreants are among the very people the government is having to supply with essentials, including food. It would be a mockery to ask them to pay a fine.

But, neither poverty nor wealth can mean being above the law. The wealthy are fined, and their vehicles confiscated. Those wondering around on foot, are detained, lectured and sent home.

That is the Rwanda that is, the Rwanda you will not glean from what is written or broadcast in these news organisations, whose entire reason for existence to inform.

And what of the local media, in the interest of even-handedness? Some interesting, and some revealing questions. The President was asked to explain the thinking behind the government’s financial contribution to the tune of $1million, to the African Union (AU) fund, and the African Centre for Disease Control, or CDC.

“What” demanded the journalist “would you say to Rwandans who are finding it difficult to pay their rent, should that money not have gone to them?”

“We know of course we have Rwandans to take care of, of course, primarily, they come first, no question about it” replied the President, “but is not an either, or. In these situations you find you’ve got to do so many things at the same…I think working together, either as Africans, or whether it is the sub region, the continent, or even internationally, you are not going to run away from the responsibility of making your own contribution, which in a sense by the way, feeds back to you…”

What is interesting about this question, is that an African journalist questions the sense of contributing to an Africa wide effort against a pandemic. The recent AU reforms, coincidentally led by President Kagame, looked at among other things, Africa’s capability in funding itself.

These reforms amounted to arguably the most significant steps taken towards strengthening the independence of Pan African institutions since the establishment of the AU. A fair enough question, but one that seemed to miss so much. Roll on to the next Press Conference, hopefully virtually Covid-19 free.