Home Voices Kissing them Goodbye: A Tribute to The Completely Wiped Out Families
Voices

Kissing them Goodbye: A Tribute to The Completely Wiped Out Families

As we commemorate the Genocide perpetrated against Tutsi, I recall with pain those families that were completely wiped out.

This leaves me with many questions. I look around, I see human beings, but again I remember that they all went silent when these families were being exterminated.

What actually happened? Why did we accept? Did these people have neighbors? Where did the possibility of picking a child and pretending to be the mother go? Where was the world? Where was God? And many more questions.

However I understand. Or do I?

That is the planet that perpetrators fed with the blood of innocent Tutsi, most of whom had only one preoccupation, “earn a better living for their descendants”, a living they were denied. For many decades they accepted that they were a category on its own. They were repeatedly counted, not for developmental purpose but to know how much effort would be required to “Kill them All” and of course for the so called “equilibre”. They were called names, they were looked at in disgust. They were dehumanized and scapegoated. Songs that kill were written and sang by many, they were broadcast, people danced over them and many were chilling.

After all this is something cyclical, ni amatungo amara urubanza, right? Whenever something happened, Tutsi had to die. Yes, Habyarimana had Tutsi Killed to stop Kayibanda from killing Tutsi. Weird!

When the King Mutara III Rudahigwa was killed in Burundi, the message was that “Tutsi killed the King” and Hutu should revenge. Yes, this happened in some parts of Rwanda, especially in the northern parts of the country. Weird!

Today we are talking about, completely wiped out families. Those babies, toddlers, youth, mothers and fathers, grandparents….all gone and we are kissing them goodbye.

One dark morning you wake up to classic music, before you know it, your very neighbor is holding a machete and seems to be convinced that you shot down the plane. Not only “you” but also your children, parents, extended families…every Tutsi played a role in shooting down the plane.

Is this what is referred to as scapegoating? More than 15,000 families are killed and more than a 1,000,000 Tutsi are gone. The plane! Or is it really the plane? 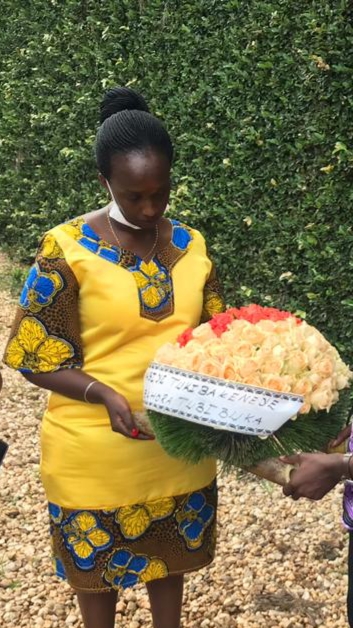 Today I kiss them goodbye
Today I do not want to remember their pain
Today I recall their resilience
Today I remember how they shone into the darkness
Today I remember what they were like
Today I remember what they liked
Today I kiss them goodbye, each of them.
Each of them young and old
Today I want to join their voices in the skies
I want to sing “We are Overcomers”
A new song in my heart
I am searching for the melody
I am searching for the steps
I know exactly how to do it
Because I know how they like it.
Here is my song
Thou shall not be forgotten
Because I am alive
Thou shall not be forgotten
Because I know who you are
I may not know every name
But I know every soul.
I count and recount those beautiful souls
With a heavy heart I kiss them goodbye
With a big smile I present our valiant soldiers
Your blood never cried “revenge”
They cried “Love”
That is my melody today
Those are my steps today
I sing and dance “Love”
For it is your legacy to this generation
And generations to come!

Thank you very Anita KAYIRANGWA, this is what they deserve, we love them! They should be proud that Rwanda was liberated from the genocidaires hands and that today all rwandans lives matter.

Good bless you sister Kayirangwa. Your words are very touching and denials should stop continuing to reverse the reality and make them victims

Dear Anita thank you for the very good article. Indeed the reason to wipe out families leaves us all with many questions. We have hope, we are a resilient people with good leadership let us say Never Again and mean it. Rwanda forwad ever backward never.