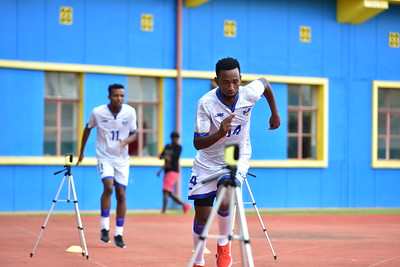 National team players have been given special dispensation to resume non-contact training as they prepare for November Africa Cup of Nations (Afcon) qualifiers.

Trainings sessions are being held in small groups with the players maintaining social distancing and all precautionary measures to avoid the spread of COVID-19.

The squad for upcoming fixtures has not been announced yet but head coach Vincent Mashami has reportedly contacted Amavubi-bound players to start training.

Yesterday, the first practice session was conducted behind closed doors at Amahoro Stadium, by fitness coach Serge Mwambari and the non-contact training will continue this week with small groups rotations to make sure there is a small number of players on the pitch.

Amavubi, who had not trained together since their friendly game against Congo Brazaville in February,are set to resume their Afcon qualifiers in November with two encounters against Cape-verde.

Rwanda was placed in Group F alongside host Cameroon,Mozambique and Cape-Verde.

The return to non-contact training marks the first step towards normal training and build-up to competitive games.

Amavubi are yet to collect a point in their group after losing to Cameroon and Mozambique in their first two games.

Meanwhile,the return of the Rwanda top-flight football has been further delayed after the Football Federation cancelled its plans to resume leagues next month.

The 2020-2021 football campaign was suspended in March and eventually abandoned in May as a result of the COVID-19 pandemic.