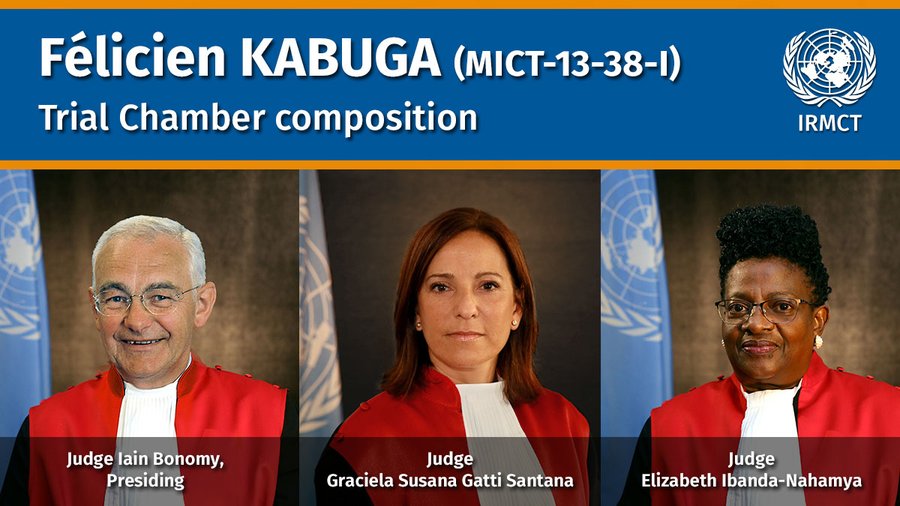 In preparing for the transfer of Félicien Kabuga to the United Nations International Residual Mechanism for Criminal Tribunals (IRMCT) President Judge Carmel Agius has assigned three judges to the Trial Chamber to take on the case.

The trio was selected based on the Rule 64(A) of the Rules of Procedure and Evidence of the mechanism which provides that the President shall assign the case to a Trial Chamber upon transfer of an accused to the seat of the relevant branch of the tribunal mechanism.

“I hereby assign, effective upon the transfer of Kabuga to the seat of the relevant branch of the Mechanism, the case of Prosecutor verses Félicien Kabuga- Case No. MICT-13-38-I, to a trial chamber composed as follows: Judge Iain Bonomy, Presiding Judge Graciela Susana Gatti Santana, and Judge Elizabeth Ibanda-Nahamya,” the IRMCT statement signed by Judge Agius said.

The 87 year old Félicien Kabuga was, on the request of Rwanda government, first indicted by the International Criminal Tribunal for Rwanda (ICTR) on 26 November 1997 and the operative indictment against him was confirmed on 13 April 2011.

Kabuga was arrested in France on 16 May 2020 and the French Cassation Court on 30 September 2020 upheld the decision to transfer the suspect to stand justice at the international crimes court based in Arusha, Tanzania.

Once Kabuga transferred to the IRMCT chambers in Arusha, the three judges are expected to read charges levied against him and proceed with initial hearings on the suspect’s defense on each of the charges.

Kabuga, who has been on the run in various countries in Africa and Europe, is alleged to be the financier of the 1994 genocide against Tutsi which claimed over one million victims.

Who are the judges?

A Ugandan who has an impressive legal background both nationally and internationally with contributions made to the United Nations Criminal Tribunal for Rwanda, Arusha, (as aTrial Chamber Coordinator) and the Special Court for Sierra Leone (as a Principal and Deputy Principal Defender).

She has intense knowledge and understanding of Human Rights policies, practices and procedures as well as institutions on a global scale and a key contributor to the development of international human rights, humanitarian, and criminal law.

She has as a freelance Independent International Legal Expert, Judge, and International Crimes Division of the High Court of Uganda.

In 2012 she was promoted to the Appeals Court of the 4th Term (competent in civil matters), and finally, on March 2016 she was transferred to the Court of Criminal Appeals of the 1st Term (current position).

She has been a consultant to the Supreme Court of Justice of Uruguay in the process of implementation of a new Code of Criminal Procedure Law.

Previously served as a criminal prosecutor to the Scottish Bar, and was appointed as Senator of the College of Justice (Judge in the Court of Session and the High Court of Justiciary, the highest court in Scotland).

He has served as a Judge of the International Criminal Tribunal for the former Yugoslavia (ICTY), handling high-profile cases and presided over the trial of former Serbian President Milan Milutinović.

From the ICTY, Judge Bonomy was appointed as a Judge of the Court of Appeal in Scotland, and subsequently served as a Surveillance Commissioner for the UK and as Judicial Commissioner in the Office of the Investigatory Powers Commissioner.

He was recently appointed by Secretary-General of the United Nations, António Guterres of the roster of Judges of the IRMCT mechanism following the resignation of Judge Ben Emmerson on 19 July 2019, and will serve the remainder of Judge Emmerson’s term of office.