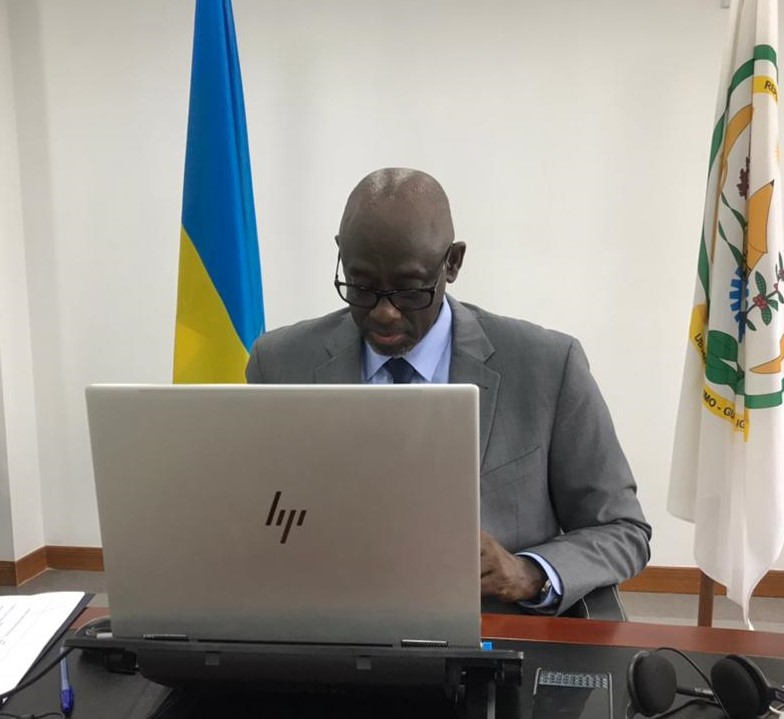 Minister Busingye in a recent virtual event. Al Jazeera is accused of eavesdropping into the Minister and Attorney General’s conversation with his PR advisors ahead of the interview.

Just days after quoting a press release of the Democratic Forces for the Liberation of Rwanda (FDLR), giving credence to a terrorist organisation, Al Jazeera is back at it again, this time targeting the Government of Rwanda through manipulation of an illegally obtained private recording, juxtaposed against a separate interview given in good faith.

The Qatar-based network came under fire on Monday this week after it published a story based on an FDLR press release, claiming that the armies of Rwanda and the Democratic Republic of Congo (DRC) were behind the attack that claimed the life of the Italian Ambassador to DRC, Luca Attanasio and two others.

Now on Friday, Al Jazeera in another targeted move published a conversation between the Minister of Justice and Attorney General Johnston Busingye and a group of public relations advisors discussing the case involving Hotel Rwanda protagonist Paul Rusesabagina ahead of a scheduled interview with the network.

Al Jazeera claimed said that the recording of the conversation was ‘inadvertently’ sent to the programme ‘UpFront’ ahead of the interview with the host Marc Lamont Hill.

In a dishonest and manipulative move, Al Jazeera kept the conversation a secret and later they would use it to box Minister Busingye into making comments that suited what they had already extracted from the private conversation.

However, Minister Busingye did not contradict himself, despite efforts  by the Journalist to lead him into backtracking on what he had said before, the same position the government has maintained.

The Ministry of Justice in a statement clarified that Al Jazeera English used parts of the Minister’s interview against what they selectively cut out in the private conversation between the Minister and PR advisors, creating a narrative that the government was interfering with the due processes of the case involving Rusesabagina and the sanctity of the defence.

“The Ministry of Justice wishes to clarify some of the issues raised in an interview with the Minister of Justice broadcast by Aljazeera English on 26 February 2021, and which was based in part on a private recording that does not reflect government policy,”

“The Minister confirmed that the Government of Rwanda facilitated the journey that led to Paul Rusesabagina’s arrest in Kigali in August 2020, a fact that has been in the public domain since September 2020,” the Ministry said.

MINIJUST further said that the Government’s position, which it has argued in court, is that this arrest was legal and proper, and at no time were Mr. Rusesabagina’s rights violated.

Minister Busingye in the interview reiterated what President Paul Kagame has previously said that Rusesabagina brought himself voluntarily up to Kigali where he was arrested, emphasising that the details will emerge in court.

During the interview Lamont Hill, armed with a private conversation, pushed Busingye to divulge more details on how Rusesabagina arrived in Rwanda and to confirm whether it was a kidnapping or not but the Minister emphasized on the legality of the process while insisting that the rest should be left to be heard in court.

The Minister also confirmed that the privacy of defense communications between lawyers and clients, including those in provisional detention, is protected under Rwandan law.

“All other materials entering a prison, including non-privileged correspondence, is subject to routine safety checks by the Rwanda Correctional Service, according to established rules that RCS is mandated to implement,”

“When the Minister became aware of a possible violation in December 2020, he immediately instructed that the relevant documents be returned to Mr. Rusesabagina and that RCS take greater care to distinguish privileged from non-privileged documentation,” the statement said.

In an interview with KT Press, Minister Busingye said that save for routine security-related checks, the sanctity of the defence and their privileged documents is assured despite manipulation of the private conversation by Al Jazeera to suggest otherwise.

Furthermore, the Ministry said that Minister Busingye did not address this matter directly in the Aljazeera interview knowing that a legal challenge by Mr. Rusesabagina’s defense lawyers on this point was likely, a challenge which was in fact raised in court on 26 February.

On Friday, following the court dismissal of Rusesabagina’s objection on the courts jurisdiction, the Hotel Rwanda character and his Lawyers Gatera Gashabana and Felix Rudakemwa informed the court that they will be filing more objections but did not reveal the details.

Judge Antoine Muhima obliged the defense to reveal which objections they wanted to file but Rusesabagina and his lawyer insisted on being given a few days to prepare themselves before submitting.

At this point, the Al Jazeera interview had not aired yet. However, during the court proceedings the Judge did instruct prison authorities to respect the sanctity of Rusesabagina’s defence after some concerns were raised on RCS actions.

It also emerged that prison authorities also intercepted communications that suggested that Rusesabagina could have been plotting an escape with the help of his daughter and other people on the outside but it was thwarted.

In the wake of the new developments, additional corrective action may be taken based on the court’s findings.