Bilateral relations between Rwanda and Democratic Republic of Congo (DRC) remain cordial and at their very best in recent decades, despite recent attempts by groups led by opposition politicians to pit Kigali and Kinshasa against each other.

This was said by Rwanda’s Ambassador to DRC, Vincent Karega, in an interview with KT Press, following recent protests targeting the Rwandan embassy in Kinshasa, incited by opposition politician Martin Fayulu. Fayulu is among Congolese politicians who peddle anti-Rwanda propaganda and conspiracy theories.

The opposition politician and his LAMUKA coalition members claimed that Amb. Karega made ‘insulting’ comments against their leader. The protestors who converged outside the embassy were immediately dispersed by police using teargas while others were arrested.

Amb. Karega, speaking out for the first time since the latest incident said that relations between Rwanda and DRC are at their all-time high and the two countries are determined to continue consolidating them, despite efforts of detractors who want to set back the progress made under the current leadership of President Felix Antoine Tshisekedi.

“When I look at close collaboration between our two states and the increasing trade volumes despite the COVID-19 pandemic, I am very satisfied and proud of the relationship and the strides of the new leadership in DRC,” Amb. Karega said

“However, some spheres within the opposition continue to propagate hate speeches against Rwanda and its leaders to undermine the relationship based on distortions of facts and lies misinforming the general public and fueling animosity,” he added.

The Envoy says that Rwanda has no intentions of interfering with local politics in DRC but will continue to set the record straight to dispel the dangerous theories and propaganda aimed at putting the two countries at loggerheads.

Karega said that Rwanda and DRC share historical ties, dating many centuries back and cannot be affected by a few political propagandists peddling falsehoods.

“We do not let it go despite their intimidation techniques and mob marches towards the Embassy of Rwanda. Our aim is not to interfere in domestic politics but to set the record straight on manipulative politics and prevent its negative impact on our regional peace,”

“Besides those minor issues but quite poisonous, we focus more on mutual political, African and bilateral interests. Our two countries are known to have ties since time immemorial, way before even the colonial era. Kings and people in Bushi and Rwanda cooperated, intermarried, traded, fought and made peace for centuries now,” Karega said.

To date, migrations, transplantations of labour from Rwanda to DRC and vice versa, practices which are centuries old, continue.

The diplomat said that following mass exodus due to cycles of recent violent history, the peoples of the two countries mingled and they continue to hold and share common interests.

“Today, both sides at the highest level have been keen to shape, revive and restore healthy, honest and win-win bilateral ties for sustainable peace and development in our region,” he said. 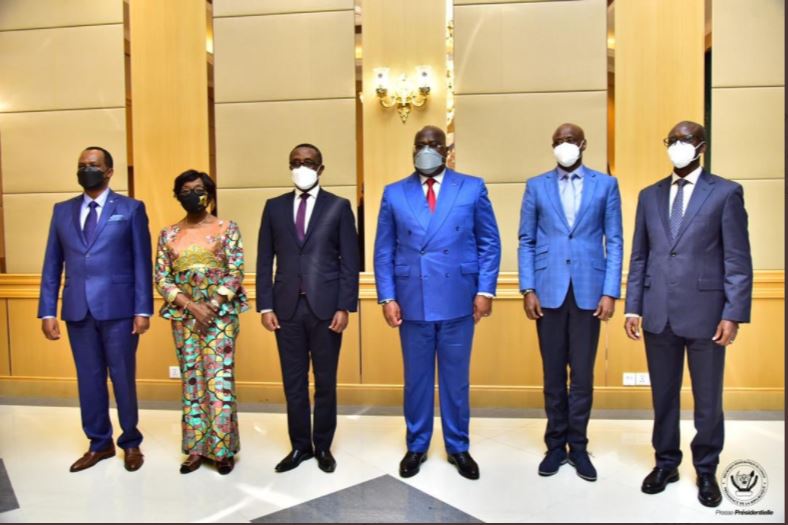 He emphasized that detractors from whichever country or continent will have no room for negative influence on the relations between the two countries.

“We aim to move towards a new era and to be able to mediate any differences within our joint mechanisms of collaboration and cooperation,” he said.

Since President Tshisekedi took office in January 2019, relations between Kigali and Kinshasa have been blossoming but malicious propaganda against Rwanda has also been on the rise, fuelled by the likes of Fayulu, Adolphe Muzito and Dr. Denis Mukwege, among others.

The same group has also been peddling the ‘balkanisation’ propaganda, claiming that Rwanda has plans to annex the Eastern Part of DRC while Dr. Mukwege and others continue to campaign against Rwanda using the UN Mapping report.

“They are up to undermine the positive trend of the current collaboration between our respective governments by trumpeting lies such as Rwanda impoverishing DRC by systematic lootings, Rwanda as responsible of millions of deaths of Congolese in East with the aim to create empty land to move in Rwandans lacking space in their tiny country with explosive demographics (Balkanisation of DRC) etc.”

“It has become an ideology and an electoral campaign motto, positioning himself (Fayulu) as a saviour against the Rwandan abuses and future threats. These are lies and political manipulation. He blames the current leaders as sell out and puppets of the Enemy Rwanda,” Amb. Karega said.

He added that fortunately, the majority of people no longer buy into that old ‘song’ which is now 20 years old. Some members of the group are also known supporters of some Rwandan rebel groups operating in DRC.