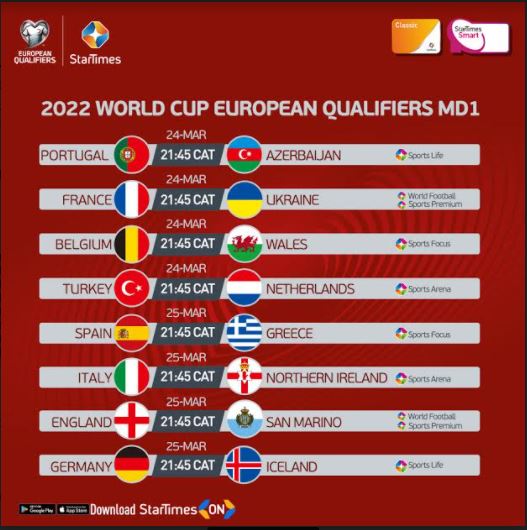 For the 55 countries that are members of Europe’s governing football body, UEFA, the road to Qatar begin this week. Kylian Mbappe, Cristiano Ronaldo, Gareth Bale and all European stars will be facing each other during the coming days.

Later than their counterparts in Asia and South America, European countries only begin their 2022 World Cup qualifiers with three match days staggered over seven days, starting on Wednesday.

The world’s top two ranked countries – Belgium and France – begin their quest for a place at the 2022 finals in Qatar with tough home matches on Wednesday.

The reigning world champions France, who are ranked behind Belgium, are at home to Ukraine in the Stade de France in Paris.

Belgium coach Roberto Martinez, whose side welcomes Wales to the King Baudouin Stadium in Brussels, will be without captain Eden Hazard, who is still labouring with a recurring muscle injury that has severely restricted his playing time this year.

Martinez is also sweating over the availability of star striker Romelu Lukaku, who might have to miss the game due to an outbreak of the coronavirus in his Inter Milan team.

There was also some bad news for Welsh caretaker manager Robert Page as Juventus midfielder Aaron Ramsey has been ruled out with a thigh injury.

The Wales football federation tweeted: “Aaron Ramsey is unable to join up with the squad due to injury.”

The last time the two met was at the 2016 Euro finals, when Wales stunned Les Diables Rouges 3-1. Several of the players who starred in that game, including man of the match Hal Robson-Kanu and captain Gareth Bale will be making the trip to Belgium.

Just three days later, Belgium face a tricky game, away to the Czech Republic in Prague.

Jaroslav Šilhavý’s team are regulars at the Euro finals, but they have only once qualified for the World Cup finals since competing internationally as the Czech Republic in 1994.

The other stand-out clash on matchday two sees Cristiano Ronaldo and his Portugal team-mates away to Serbia, also on Saturday.

Serbia has twice played at the World Cup finals – in 2010 and 2018, but failed to advance past the group stage on both occasions, though they did manage to beat Australia (2010) and Costa Rica (2018).

Football fans throughout Africa will be able to watch these – and other – World Cup qualifiers live and in HD on the StarTimes football channels.

Make sure you do not miss out on any of the exciting competition brought to you by Africa’s leading digital-TV operator, StarTimes, which has secured the broadcasting rights for the European World Cup qualifying competition and the EURO 2020.