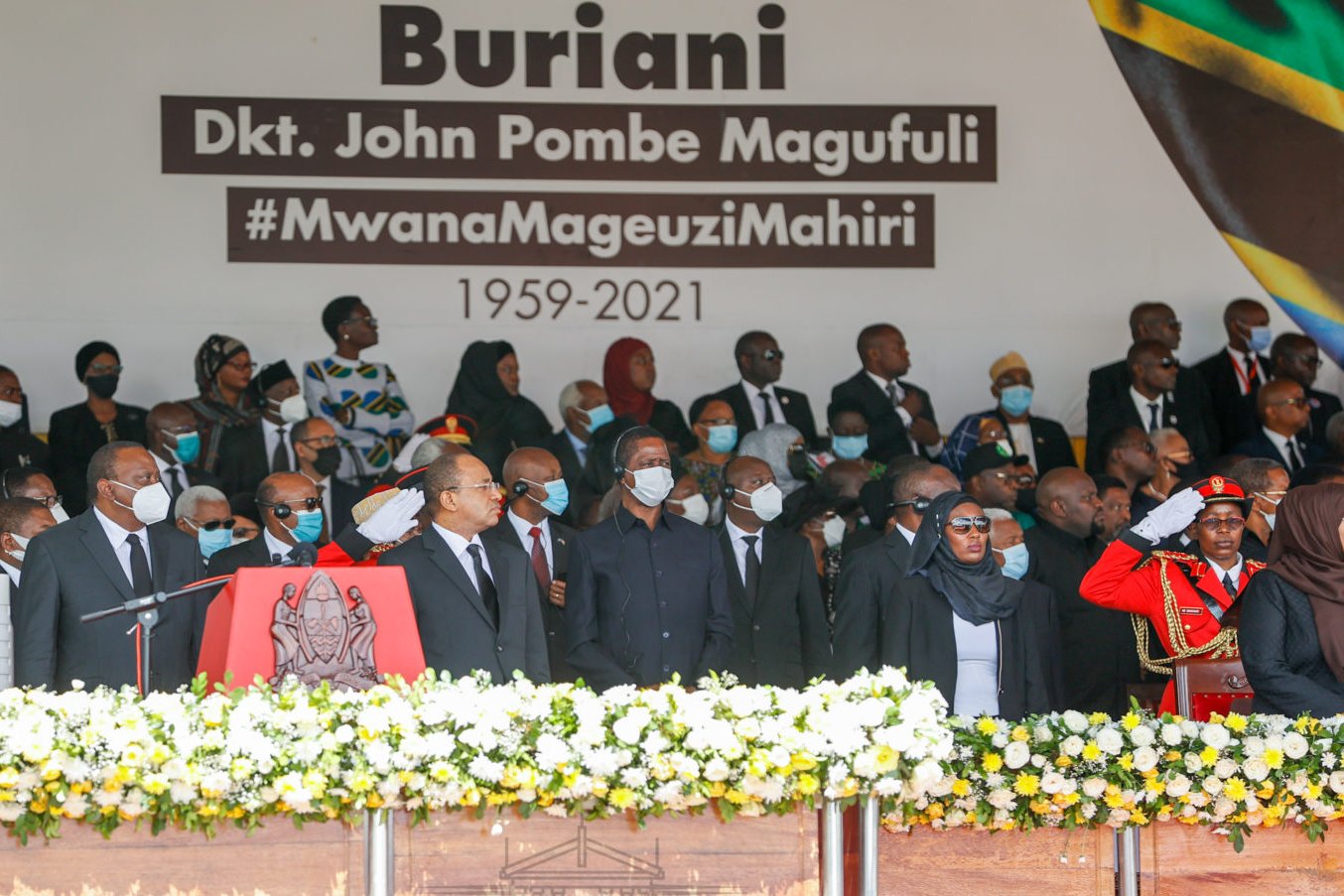 The Prime Minister, Dr. Edouard Ngirente was among the dignitaries who attended the state mass of the late President John Pombe Magufuli.

This was part of the message that was delivered by the Prime Minister, Dr. Edouard Ngirente, at the state funeral to honour the deceased leader, held in Tanzania’s administrative capital, Dodoma, on Monday.

“The Government of Rwanda has had a privilege of working closely with H.E. Magufuli not only as an EAC integration champion but also as a great contributor to strengthening the Rwanda-Tanzania bilateral relations. His legacy will always be remembered,” Dr. Ngirente said in a short speech.

The mass was attended by several African leaders, including the President of Democratic Republic of Congo (DRC) and chair of African Union (AU), Felix Antoine Tshisekedi, as well as the President of Kenya and chairperson of the East African Community (EAC), Uhuru Kenyatta. 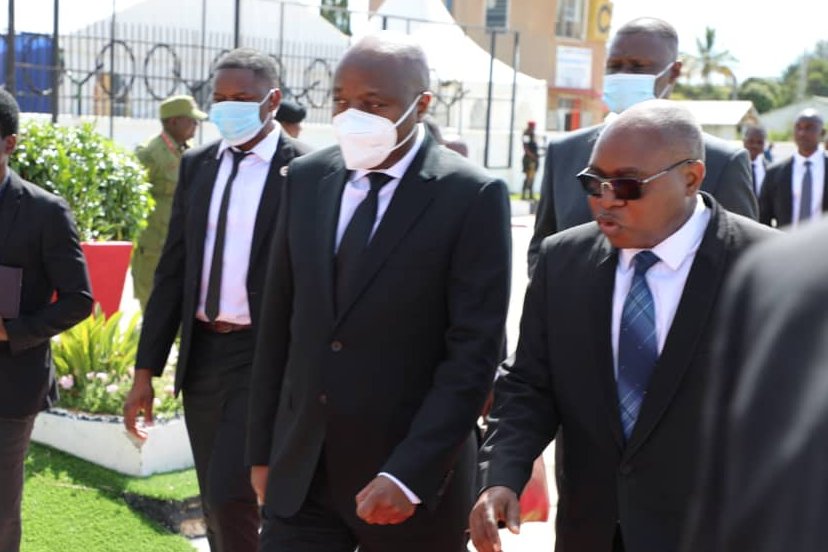 The Prime Minister, Dr. Edouard Ngirente (middle), represented the President of the Republic.

In his remarks, President Kenyatta eulogised the fallen Tanzanian leader, who he described as a true Pan-Africanist who strived for the independence of the African continent by tapping into domestic resources instead of waiting for foreign aid.

The Kenyan leader said that President Magufuli proved that African countries can rely on their own resources and finance their own development rather than depending on handouts.

“In a very short period of time, President Magufuli showed that we as Africans are able to free ourselves from depending on foreign aid and that we have what it takes to manage our own natural resources and ensure that our people get what is rightful to them,” President Kenyatta said in during the requiem mass.

President Magufuli, who was in his second term had often criticized foreign aid and loans with unfair conditions and put in place policies that ensured that Tanzania got value out of its natural resources, especially minerals and agricultural produce.

President Kenyatta said that his successor, President Samia Suluhu Hassan, has a huge gap to fill, left behind by President Magufuli but promised her the full support from fellow East African leaders to continue where her predecessor stopped.

“We will keep doing what we have been doing to keep the East African spirit alive and to bring our people together. I assure you that we will walk this journey together to bring the region together and the continent as one,” President Kenyatta said. 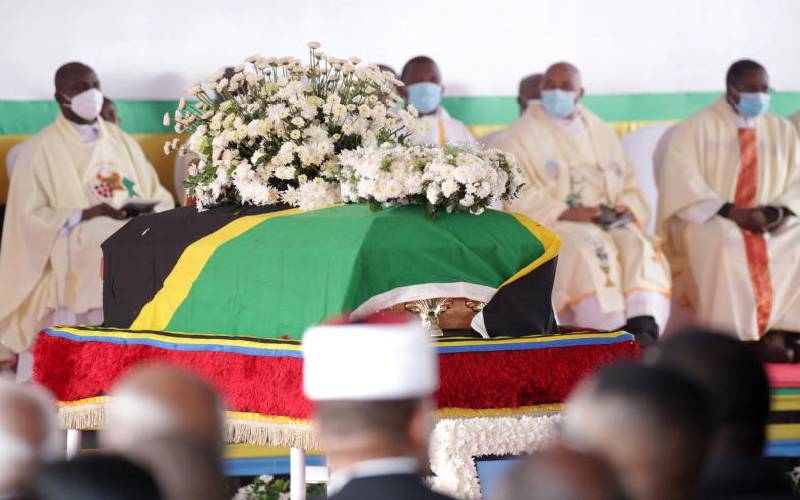 Public body viewing events have been marred by stampedes.

President John Pombe Magufuli, who died on Wednesday March 17, will be buried on March 26, in his birthplace of Chato, Geita Region.

A programme released by President Suluhu, will see the body of the Tanzania leader viewed by the public but the first days were marred by stampedes in which scores of people died.

President Suluhu also announced a 21-day mourning for Magufuli, adding that all flags of Tanzania will fly at half-mast for the period.

In her speech, President Suluhu revealed the last words her few days before he passed on, reassuring her not to bother about his health and instead focus on the projects.

“Samia don’t worry about my health, go check out the projects we promised to deliver to the people, send my greetings and tell them I love them.”

She said that she gone for an official working visit to the region of Tanga when she called Dr Magufuli to inform him of her visit as usual.

Tomorrow, March 23, the body will be flown to the island of Zanzibar where people will pay their last respects while on March 24, President Magufuli’s remains be flown to Mwanza, near Lake Victoria for the same exercise.

On March 25, the body will be flown to his home province of Geita for family and the public to pay their last respects.

On March 26, there will be a mass for President Magufuli, who died of heart-related complications, at the Catholic Church in Chato followed by burial at his home. He was 61 at the time of his passing. 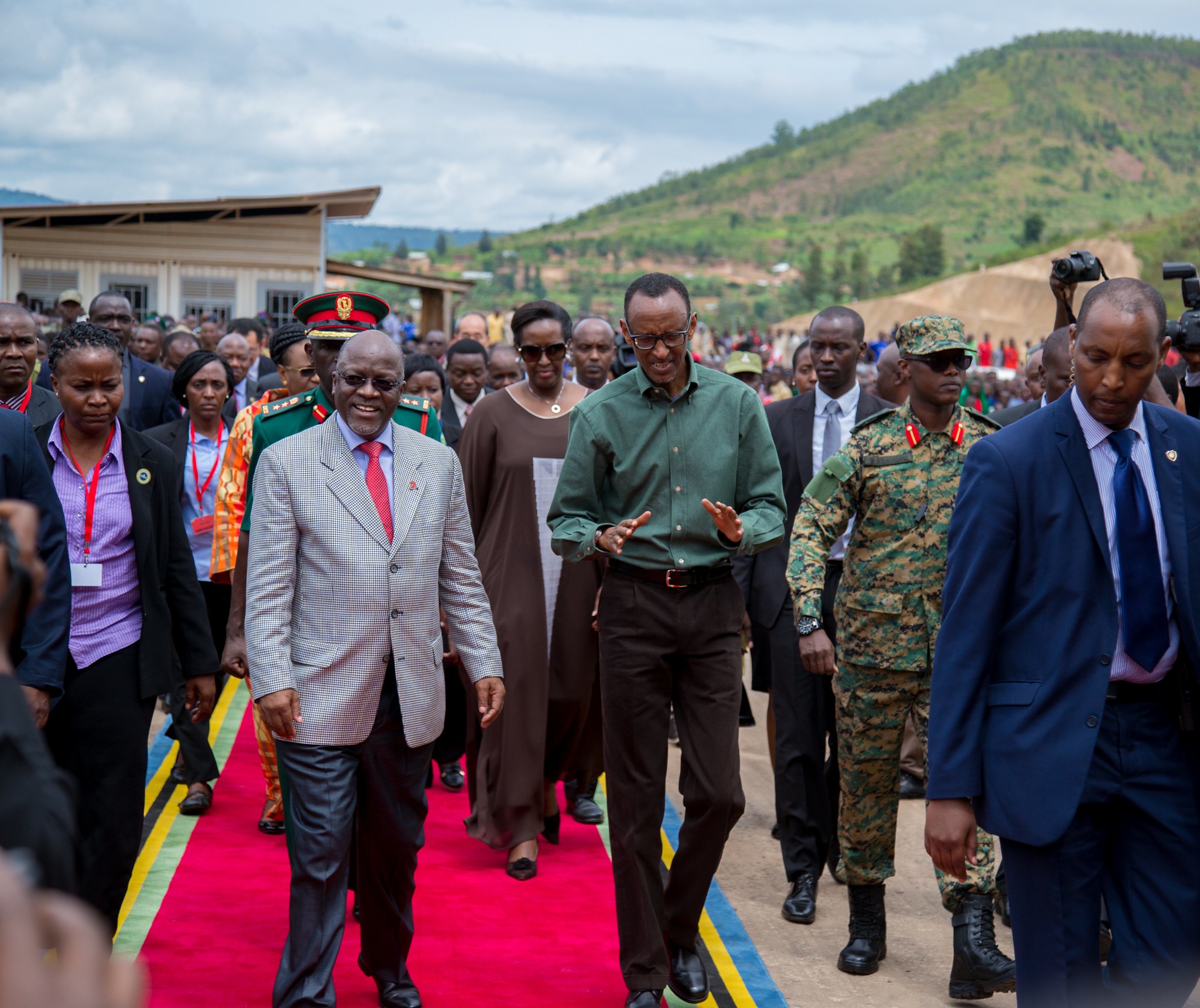 Many Rwandans have eulogized President Magufuli as a friend of Rwanda.