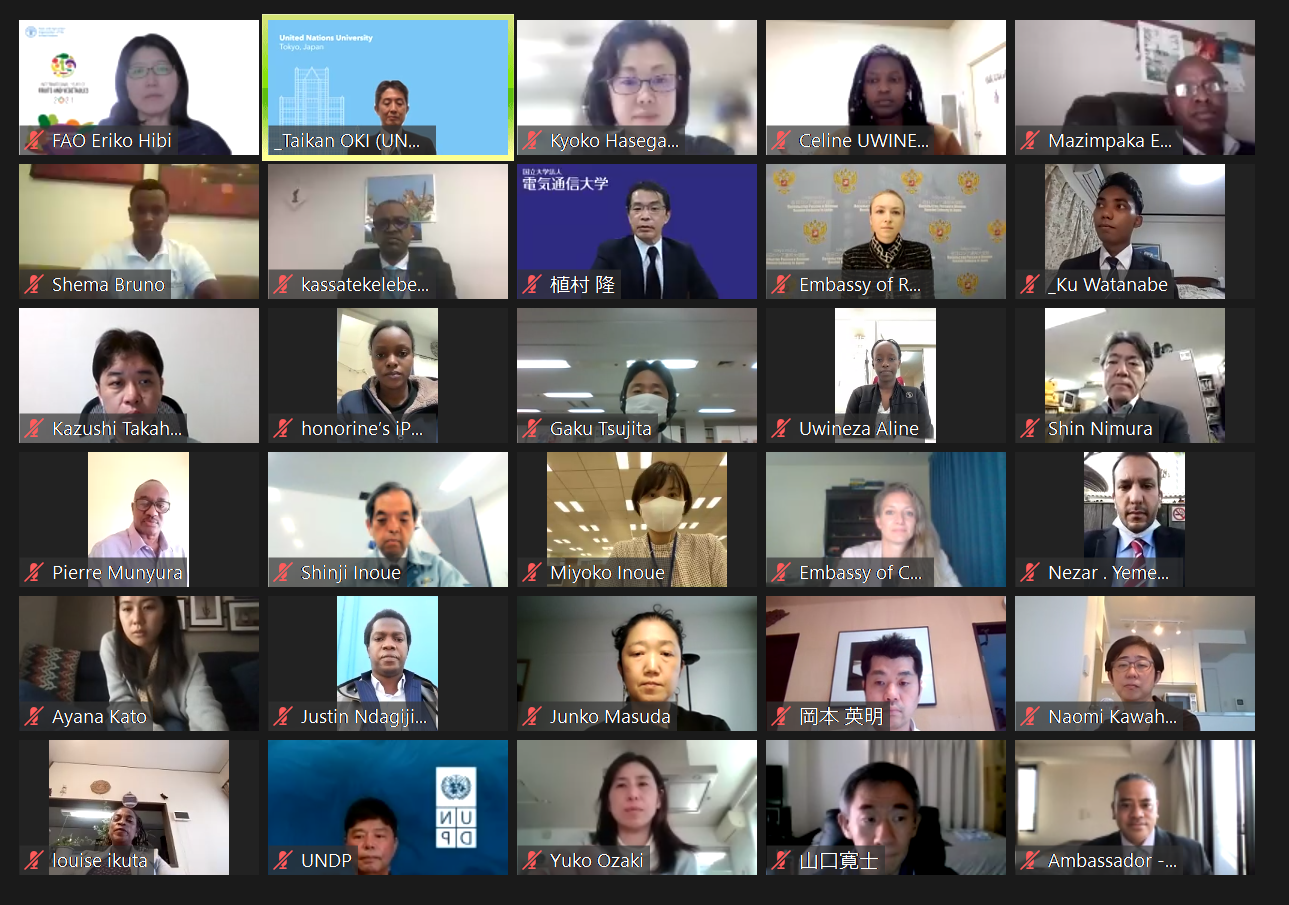 The Embassy of the Republic of Rwanda to Japan, on Wednesday 7th April 2021; in collaboration with the United Nations University in Tokyo hosted members of the Diplomatic Corps, Government of Japan officials, academics, media, business leaders, friends of Rwanda and members of the Rwandan community to mark the 27th commemoration of the 1994 Genocide against Tutsi.

Due to COVID-19 impact and preventive measures recommended in Japan, the event, was held virtually with over 200 participants representing the Diplomatic Corps in Japan, hundreds of friends of Rwanda and members of the Rwandan community in Japan, Malaysia, Philippines and Thailand.

The Government of Japan was represented at the event by Honourable Konosuke Kokuba, Parliamentary Vice-Minister for Foreign Affairs.

In his key note speech on the occasion of Kwibuka27, Hon. Kokuba expressed the Government of Japan’s solidarity with Rwanda during this time when the world remembers the victims of the tragic genocide against the Tutsi.

He opened his remarks with greeting in Kinyarwanda and emphasized the spirit of Turikumwe and the essence of Kwibuka built on the core theme of Remember, Unite, Renew. The Hon. Vice-Minister expressed condolences for the innocent lives lost and applauded the progress Rwanda has made over the last 27 years.

He also praised H.E. President Paul Kagame’s strong leadership in realisation of the current transformation of Rwanda highlighting Rwanda being the 2nd best country with a business-friendly environment in Sub-Saharan African region and its ICT development. 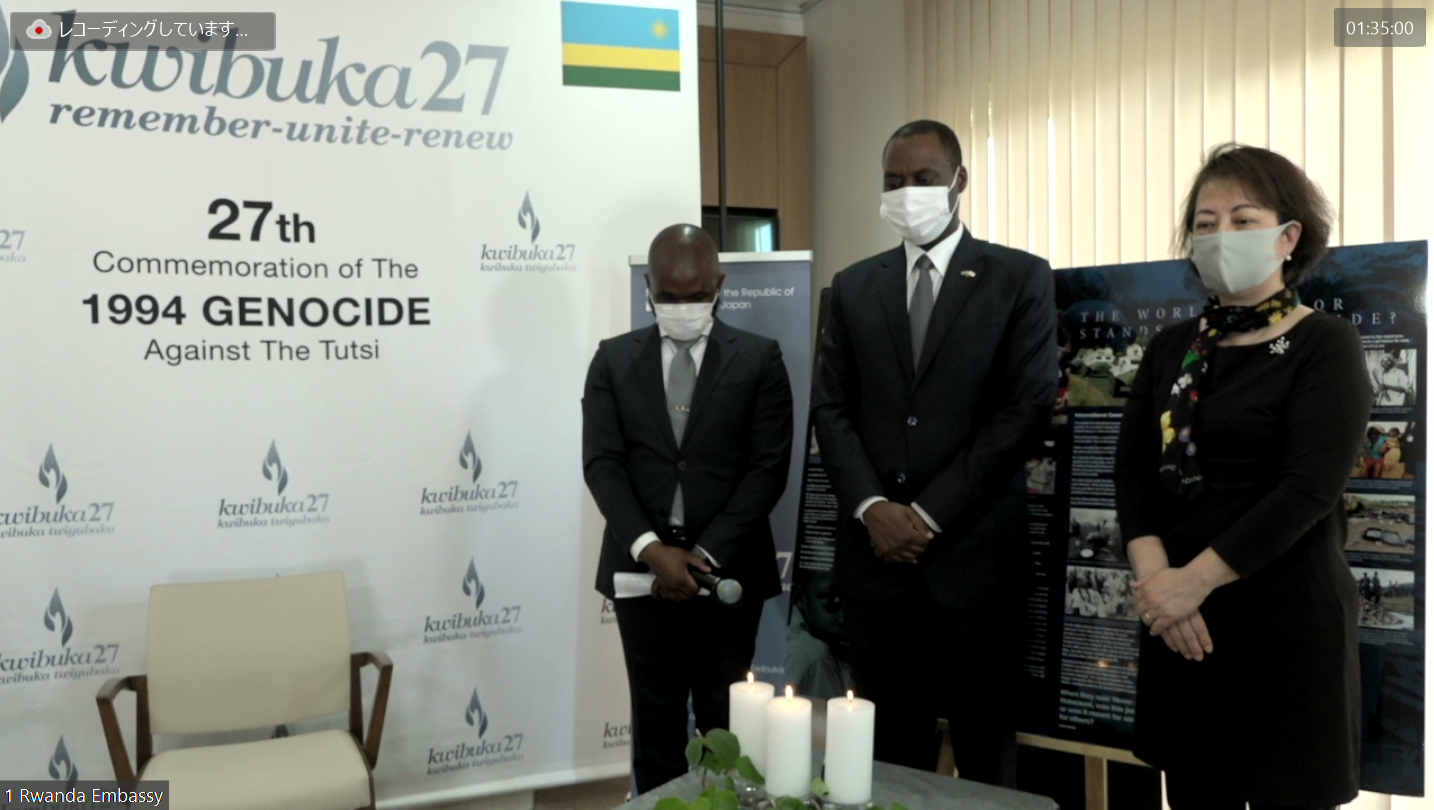 He emphasized the strong bond of friendship between Rwanda and Japan’s commitment to continue supporting Rwanda on its journey of development and dealing with the tragic legacy of the genocide. Japan has provided assistance for renovation of the Kigali Genocide Memorial Centre.

Hon. Kokuba is a senior member of the Liberal Democratic Party of Japan and a Member of the House of Representative of Japan. He joined Prime Minister Yoshihide Suga’s Cabinet in September 2020.

Other key note speakers were Prof. Taikan Oki, Senior Vice Rector, United Nations University, and H.E. Mr. Estifanos Afeworki Haile, Ambassador of Eritrea to Japan and Dean of African Diplomatic Corps. In their commemorative remarks, they condemned the failure of the international community in preventing the genocide They called on the international community to prevent and ensure that such atrocities never happen again by ensuring accountability by the perpetrators of the genocide and delivering justice for the victims.

During the commemoration ceremony, Amb. Ernest Rwamucyo, Ambassador of Rwanda to Japan, highlighted the key elements of the theme of Kwibuka27; Remember, Unite and Renew as being at the core of reflecting the tragedy that befell Rwanda and the future that Rwandans want to build. 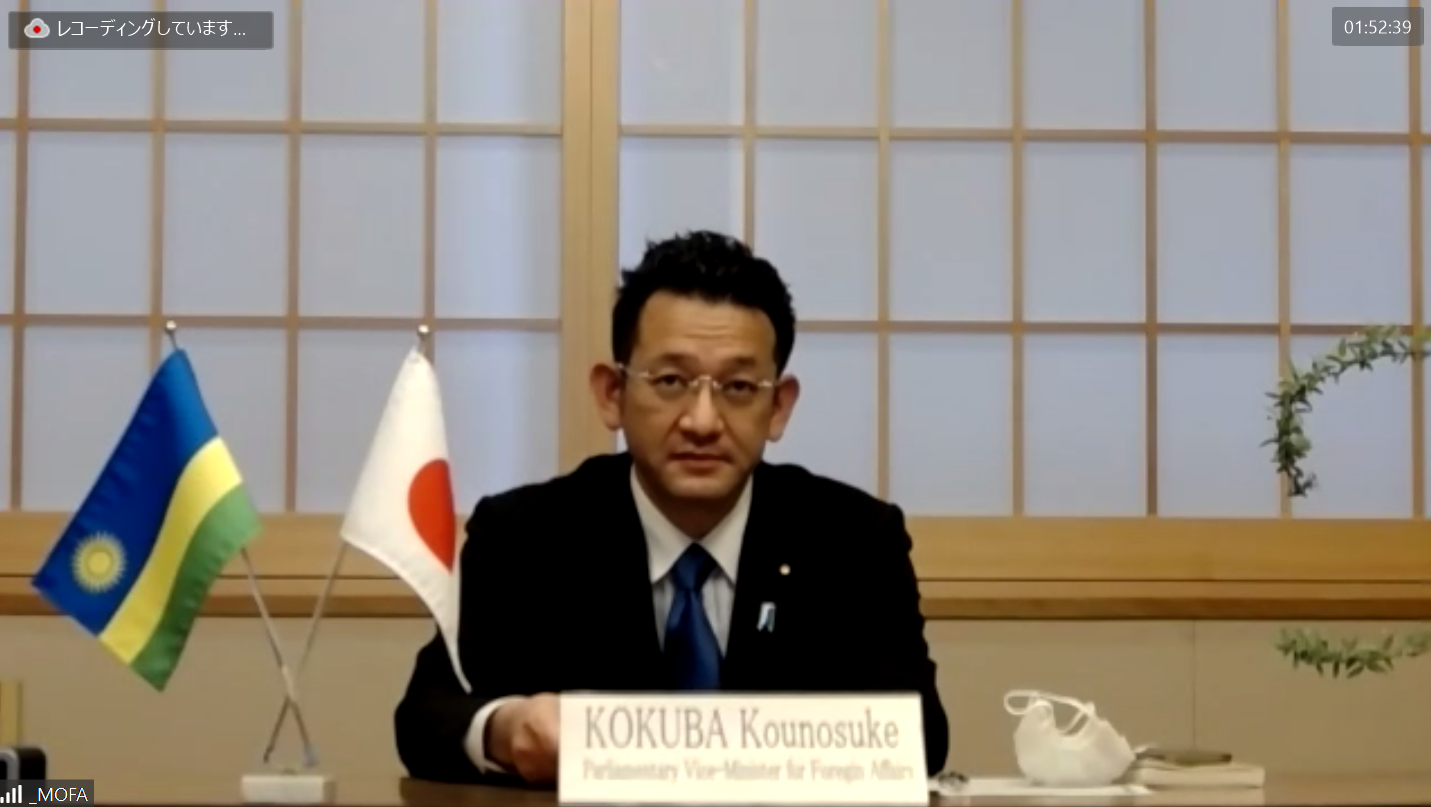 He shared the path Rwanda decided to take to overcome the devastating legacy of the genocide and build a new transformed nation. He highlighted the importance of standing up and speaking against genocide, racism and all other forms of discriminations which is crucial to ensuring such atrocities never happen again. Amb. Rwamucyo shared the success stories of Rwanda’s post-genocide transformation and the important role of Rwanda’s visionary leadership on the journey of re-birth.

The virtual event hosted at the Embassy of Rwanda in Tokyo started with prayers for the victims and the survivors of the genocide led by Monsignor Veceslav Tumir of the Apostolic Nunciature in Japan and was followed by lighting of remembrance candles and a minute of silence in memory of the victims of the genocide. A video depicting the tragedy of the genocide, the resilience of the survivors and Rwanda’s recovery from the tragedy was streamed to educate the participants. Requiem songs in memory of the victims of the 1994 genocide against the Tutsi were sung by Ms. Satoko Sho, a renowned Japanese Opera singer.

The Embassy will host more events to observe 100 days of genocide commemoration period and engage Japanese society as a way to show the history and facts of the genocide; while highlighting the progress made and bright future of Rwanda as the country transforms itself after the tragedy.

Rwanda and Japan enjoy a strong bond of friendship not only in diplomatic and political relations but also in bilateral cooperation and in business and private sector.