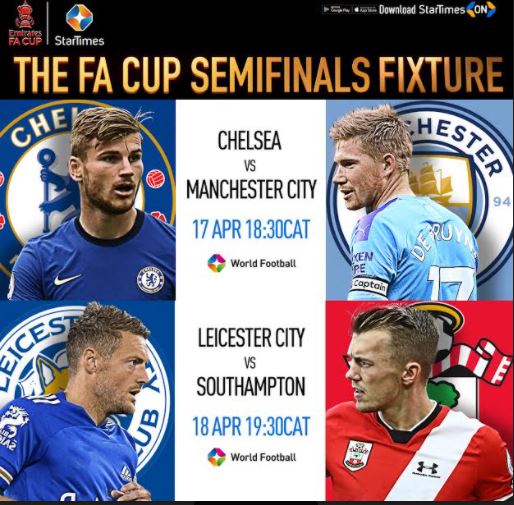 The FA Cup semi final clash between Tuchel’s Chelsea and Guardiola’s Manchester City will take place Saturday in Wembley. They will fight for place in next month’s final, against either Southampton or Leicester City.

On Tuesday Thomas Tuchel took Chelsea into the semi-finals of the Champions League for the first time in seven years. On Saturday, he has bigger fish to fry.

And in terms of footballing fish, they hardly get bigger than Manchester City, whom the Blues are taking on in the FA Cup semi-final at the home of English football: Wembley Stadium.

Tuchel has been a perennial trophy-winner with PSG and last season won the double with the club from the French capital.

“There is nothing to hide. This is a club that has a culture, a structure to win titles and win games consecutively. Chelsea is the club that has the culture and the history and mentality to do so.

Tuchel will be somewhat worried about the form of German international Timo Werner, who has not found the form he produced in the first few months since joining the London-based club.

In their last league outing and in the Champions League return leg against Porto, Tuchel played Kai Havertz, Christian Pulisic and Mason Mount upfront and the trio performed so well, that they might be given the nod against the Citizens.

Tuchel could also play Havertz behind the strikers if he wants to go for a less attacking formation.

Like Tuchel, his Manchester City counterpart, Pep Guardiola, has made winning trophies his business. He seems on track to win his third league title with the club this season and would love to emulate the 2018/19 season, when they won the double.

Guardiola has an embarrassment of riches when it comes to team-selection, with Ilkay Gündogan and Portuguese centre back Ruben Dias arguably being the stand-out players for the side in the last few weeks.

Despite being a midfielder, Gündogan is the club’s top scorer this season so far and Chelsea will be hard-pressed to keep the German international at bay.

Sunday’s semi-final sees Leicester City take on Southampton and like the Chelsea v Manchester City game, the match will be played at Wembley.

Under Brendan Rodgers Leicester City are enjoying an excellent season and are currently lying third in the table behind the two Manchester clubs, but ahead of teams like Chelsea, Liverpool and Tottenham Hotspur.

The biggest problem Leicester face is that they are very dependent on the goals of Jamie Vardy and Kelechi Iheanacho, and if the two fail to score, Leicester struggle to win.

For Southampton, appearing in the semi-final is presumably already a huge success, especially as they had to beat Arsenal to get there.

They won the competition once before (in 1975) and last appeared in the final in 2003, when Robert Pires scored the only goal of the match to give Arsenal victory.

Fans are now hoping that 14 years later they again book a place in the final of the oldest knock-out cup in the world: The iconic FA Cup.

For football fans all over the world the FA Cup represents one of the highlights on their footballing calendar. No true fan will want to miss the action and fans throughout Africa are no different.

They will be able to watch both matches live and in HD on the StarTimes channels as Africa’s leading digital-TV operator has been screening the best FA Cup action throughout the season.

StarTimes also broadcasts all the action of some of the most exciting football events on the StarTimes football channels, such as Bundesliga, La Liga, UEFA Europa League or the coming UEFA Euro 2020.