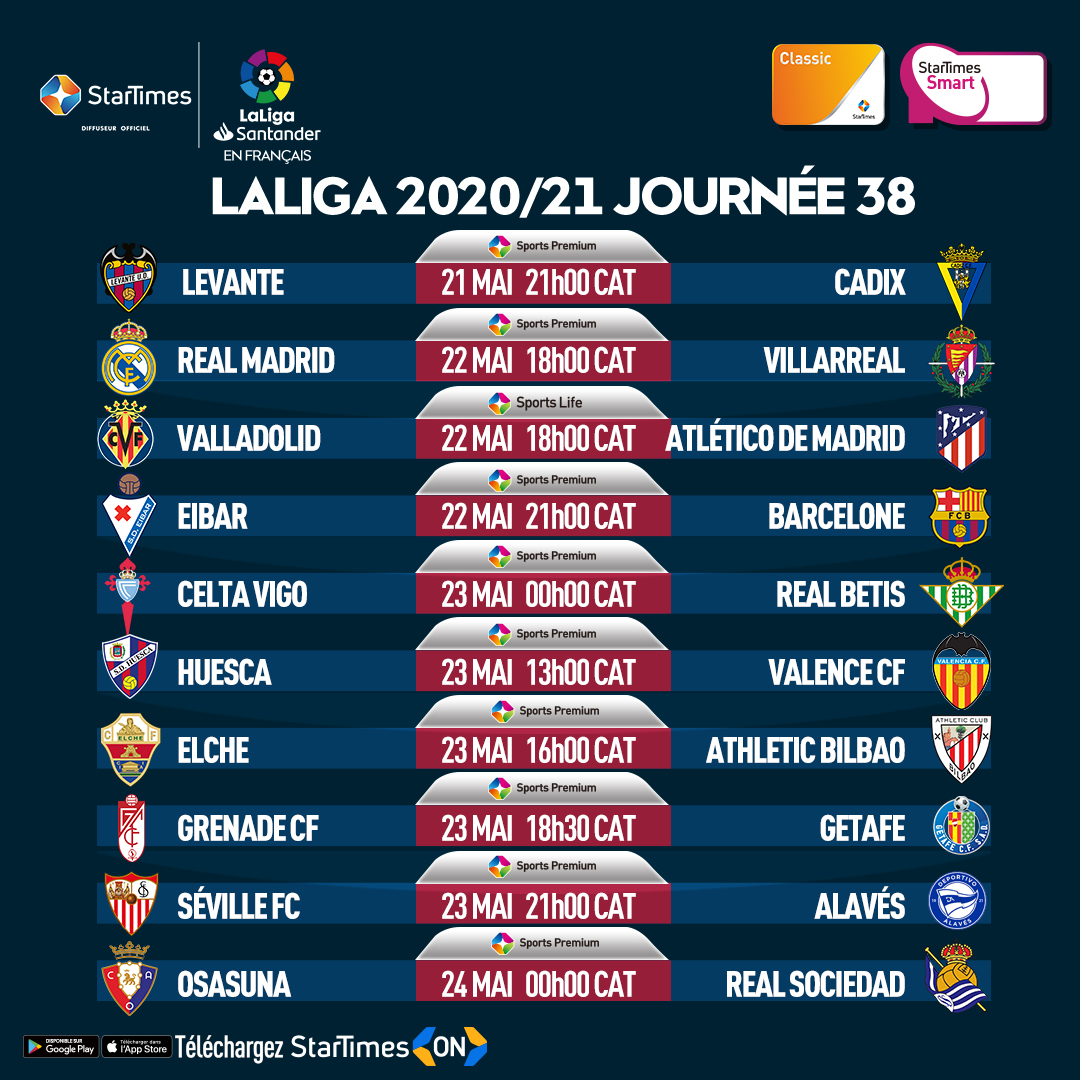 La Liga’s title-deciding final round will be played on the weekend. Atlético Madrid and Real Madrid both go into the games with hopes of being crowned champions. Diego Simeone’s side are two points clear at the top and need a win to secure the title against Zinedine Zidane’s squad. Matches will be aired live and in HD on StarTimes.

Sports journalists love clichés like: Going down to the wire or photo finish and often they are over-used. But when it comes to this year’s La Liga title, both are correct.

Surprisingly, only one of the two powerhouses of Spanish football is involved in the nail-biting finish.

Going into the final round of matches, Atlético Madrid are in the driving seat, as they lead their city rivals Real Madrid by two points. Barcelona, who are seven points adrift, no longer have a chance to catch Atlético.

A victory on Saturday for Diego Simeone’s team at Valladolid will see the Colchoneros win their 11th title – and their first since 2014.

A draw or defeat would open the door for Real to repeat last season’s triumph. However, to stand a chance to do so, Los Blancos need to beat Villarreal at home in the Alfredo di Stéfano Stadium.

Should Atlético draw in Valladolid and Real beat Villarreal, both sides would have 84 points and Real would be crowned champions, irrespective of their result, based on the head-to-head results between the two teams.

Spain is one of the few countries in Europe where finals placings are decided on the head-to-head basis before the goal difference. And as Real won 2-0 at home and drew 1-1 at Atlético, Zinedine Zidane’s team will finish ahead of their city rivals if they finish equal on points.

The fact that Real Madrid is in contention with one game to go, is rather remarkable, given the fact that in February Atlético were six points ahead of their bitter rivals and had played a game less.

One of the players credited with Real’s turnaround is German international Toni Kroos, who has been one of the stand-out players in the team.

Zidane will, however, be without the influential midfielder for the all-important match against Villarreal. Kroos had to sit out Real’s victory at Athletic Bilbao on Friday as he was in self-quarantine after coming into contact with a person who tested positive for Covid.

The coach was hopeful he would have Kroos back for the last game, but late Monday Real issued a statement saying: “Real Madrid C. F. announces that our player, Toni Kroos, tested positive in the COVID-19 test he underwent today [Monday].”

And Kroos is not the only worry Zidane has, as defensive players Raphaël Varane, Ferland Mendy, Daniel Carvajal and Sergio Ramos are either unavailable, or at best very doubtful for Saturday’s match.

Thus much will depend on Real’s attacking play, where Luka Modric, Vinícius Júnior, Marco Asensio and Karim Benzema have been grabbing their share of the headlines.

Simeone’s team, of course, also has no absence of star players, with Marcos Llorente, João Félix, Ángel Correa and Luis Suárez being the ones who have scored most of the goals this season.

At the back Jan Oblak, who is considered as one of the best goalkeepers in the world, has conceded fewer goals in the league than any other keeper.

The two decisive La Liga matches will draw a worldwide audience and African football fans will not have to miss out as the games are being broadcast live on the StarTimes football channels.

And next month, StarTimes is to broadcast all Euro 2020 51 matches live and in High Definition across Africa.