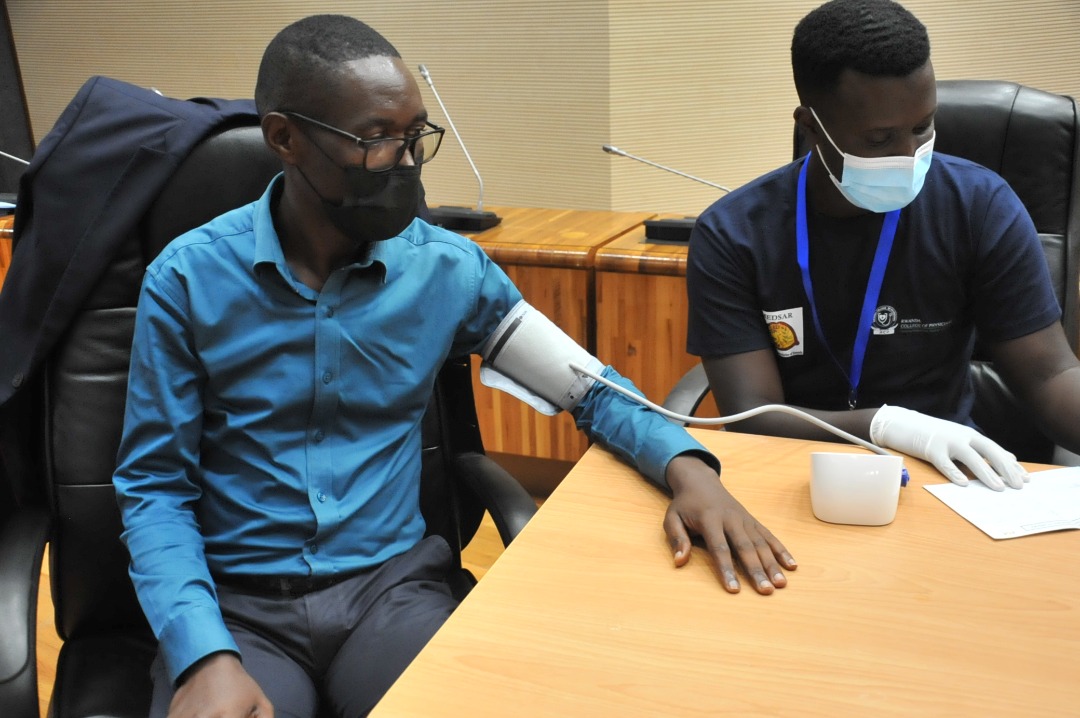 Pie Nzeyimana, Member of Parliament during test for blood condition

Rwanda joined the rest of the world to celebrate World Hypertension Day with members of parliament committing to taking a lead role in increasing community awareness and advocacy to prevent increasing numbers of non-communicable diseases.

Hypertension ((HTN) is a serious medical condition and can increase the risk of heart, brain, kidney and other diseases.

Every year on 17 May, the world celebrates the World Hypertension Day (WHD) dedicated to raising awareness about the disease in different global communities.

This year’s theme is “Measure Your Blood Pressure, Control It, Live Longer” with the goal of increasing high blood pressure (BP) awareness in all populations around the world and a focus on accurate BP measurement.

The World Health Organisation says that hypertension is the leading cause of cardiovascular diseases and premature death worldwide, with upwards of 1 in 4 men and 1 in 5 women over a billion people having the condition.

The burden of hypertension is felt disproportionately in low- and middle-income countries, where two thirds of cases are found, largely due to increased risk factors in those populations in recent decades.

Statistics from Rwanda Biomedical Centre (RBC) survey, indicate that the prevalence of Hypertension in people between 15 and 64 years old is estimated at 15%, meaning that Rwanda has around one (1) million citizens with Hypertension nationwide but currently around 80,000 people enrolled in clinics, representing a coverage of 10%.

“This means that we still have many people with HTN in the community undiagnosed or not under treatment yet screening services for NCDs are available at all health centers for a price as low as Rwf200,” said Dr. François Uwinkindi, the Non Communicable Diseases (NCDs) Division Manager at RBC.

To increase this awareness on treatment, RBC on Friday May 14, 2021 kicked off screening activities in five sites including the parliament and Senate of Rwanda.

Senate President Dr. Augustin Iyamuremye said that leaders must take a lead role in taking screening exercises so as to encourage more Rwandans to follow suit.

“As senators, taking part in this screening is to give an example to citizens that prevention is better than cure, especially for some of us who are above 40 years, it is important to encourage citizens to know their health status,” Iyamuremye said shortly after having a hypertension and diabetes screen.

RBC says to increase awareness of hypertension, two critical components are needed. They include: establishing high capacity community screening programs for recognition of high Blood Pressure (BP) in those at risk, and promoting routine measurement of BP by health care professionals at all clinical encounters.

MPs say that most of the citizens are aware of NCDs but there is a need to improve communication and community based campaigns and to improve health services at all health facilities.

President Kagame on What Africa Can Do to Develop Football