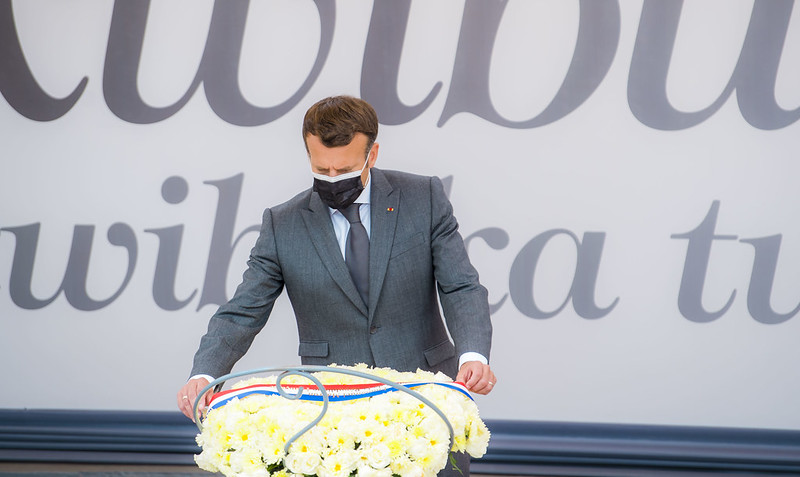 President Macron’s visit to Kigali will go down in history books as a memorable and turning point in France and Rwanda relations since  the genocide against the Tutsi in 1994. His speech at Kigali Memorial on May 27, was impressive and moving. He found touching words to pay tribute to victims including babies of Hutu-Power cruelty.  For once I understood why some people consider Macron a man of exceptional intelligence. Macron included in his delegation two survivors of the genocide namely; French MP Hervé Berville who was adopted by a French family in 1994 when he was 4 years old and Annick Kayitesi-Jozan who lost all her family members when she was 14, and was made to clean off the blood of her mother killed in front of her own eyes by Rwandan troops. Kayitesi is the author of the book “Nous existons encore – “We are still alive” (Michel Lafon, 2004).

President Macron denounced in clear terms the then French government that aided and abetted a genocidal regime that carried out the crime of crimes against women and children. Such recognition comes at a time when Germany has just recognised the genocide against the Herero and Nam peoples of Namibia and will pay $ 1.2 billion in compensation. Germany still pays to this day compensation to the Jewish State of Israel for the genocide against the Jewish people. Will Rwandan Tutsi ever get compensation from France for her role in the genocide?  Belgium for having installed a genocidal and cruel regime in 1959 and presided over the expulsion into exile of the first refugees in Africa? The United Nations for their betrayal in 1959 and again in 1994, the Catholic Church which was the architect of the genocidal ideology of Hutu-Power?

The American Catholic Church has so far paid up to $ 4 billion in compensation for sexual abuse of children and vulnerable young women. Why not compensation to victims of the genocide against the Tutsi by the Catholic Church which was a state within the state and which preached hate instead of the gospel of brotherhood and humanity?

Macron’s speech in Kigali was powerful as president Kagame pointed out. However, it’s no match to the worldwide genocidal propaganda of Hutu-Power. A few weeks ago, Rwandan State Minister Edouard Bamporiki wrote an impassioned letter to Rwandan diaspora youths beseeching them to shun the merchants of hate and war. Will they listen to him? I doubt, the enemy has the entire matchless propaganda machine on social media.

While the president of the greatest superpower in the world Donald Trump was silenced by Google, Apple, Facebook and Amazon (GAFA), Hutu-Power genocidal venom is spewed freely poisoning the hearts and minds of Rwandan youths all over the world. As UNESCO preamble asserts: “since wars begin in the minds of men, it is in the minds of men that the defences of peace must be constructed.”  The German Nazism was eradicated militarily and morally, the Tropical Nazism of Hutu-Power will not be defeated without a worldwide concerted effort to outlaw the ideology. Otherwise, genocide against the Tutsi is in the making as the world watches indifferent like last time.

President Kagame in his speech in reply to Macron said there was an element of racism that explains the refusal of the international community to rescue hapless Rwandans. If Hutu-Power is not combatted and defeated, history is bound to repeat itself. In Europe, countries establish centres for de-radicalisation of Muslim terrorists; the rampant radicalisation of Hutu-Power militants portends doom for the Great Lakes region. Already, in a neighbouring country, a regime subscribing to the killer Hutu-Power ideology reigns supreme. It came into power through the slaughter of women and children and the world like in Rwanda looks on indifferent or with the cheap and useless “We are deeply concerned” that have never ever saved a single life.

The visit to Rwanda by President Macron came at the backdrop of the French Duclert Commission Report by historians and Muse Report by American Law Firm  Levy Firestone Muse LLP, which concluded that France had “heavy and overwhelming responsibilities” in the genocide against the Tutsi. These reports should be a game changer and bring the United Nations, the European Union and African Union to declare illegal the denial of the Genocide against the Tutsi in Rwanda. It’s the only way to avoid repetition of the crime that is being spread by fugitive genocidaires, deniers and apologists.

The future of Rwanda and indeed of the Great Lakes region is playing now. If the United Nations, the Catholic Church and the Colonial Power Belgium had not betrayed Rwanda by installing and supporting a racist, genocidal and Hutu-Power regime in 1959 that produced the first refugees of modern Africa, history would have been different.

Once again, by ignoring the worldwide trending propaganda by genocidaires, deniers and apologists, the UN, Catholic Church, African Union and the so called International Community are playing with fire as Hutu-Power will turn once again the Great Lakes into a killing field like 1994.