In a TV interview earlier this year, Paul Rusesabagina’s daughter Carine Kanimba claimed that the 2018 terror attacks by her father’s FLN militia group were “false flag operations of the Rwandan government”.

However, it is now known that Rusesabagina and members of his coalition, Rwanda Movement for Democratic Change (MRCD) planned and went on to attribute attacks in Nyungwe carried out by the National Liberation Front (FLN) on the Government of Rwanda.

Details of the covert plan are outlined in evidence presented during the trial, which the Prosecution obtained through judicial cooperation with Belgium as part of investigations into the 2018-2019 terror attacks.

KT Press has seen some of the evidence obtained from computers and phones seized from Rusesabagina’s Brussels house during a search by Belgian authorities, copies of which were provided to Rwandan prosecutors.

Rusesabagina has on several occasions attempted to distance himself from FLN armed activities during his court appearances, but evidence shows that he was in fact fully involved, including conniving with the MRCD leadership to blame the Nyungwe attacks on the government.

Whatsapp messages seen by KT Press show that Rusesabagina regularly received updates on the FLN attacks and gave advice on how to proceed.

In one of the chats dated 17 December 2018, Rusesabagina discusses with Innocent Twagiramungu, legal advisor for MRCD how the attack in Kitabi should be communicated:

“News reaching me indicates that many lives were lost at Kitabi and many others injured. Three passenger buses were shot at and it is possible that many people died in the attack and others were injured. The situation is worrisome, people are traumatised,”

“People are now discussing how we should react, especially on radio. I would suggest the following two scenarios: Total silence and we let the ‘farmers’ (fighters) continue with their activities. But if we must comment or say something, our focus should be on the military or police, or other activities that do not involve civilians”

“The second scenario is that in the event an incident involves loss of civilian lives, we can issue a communique attributing the killings to DMI [former Directorate of Military Intelligence].”

Rusesabagina and Innocent Twagiramungu then agree on the second option and seek to disseminate the propaganda widely, especially through international radio stations.

In the same conversation, Rusesabagina and Twagiramungu agree to consult Espérance Mukashema, who was at the time the head of the propaganda online radio ‘Ubumwe’, financed by Rusesabagina, on how best to implement their agreed strategy.

Esperance Mukashema, whose name was mentioned many times during court proceedings, agreed with the idea and affirmed that blaming the government would be more effective.

She then proposed that a third party be found to push the narrative, and volunteered to find the right person.

Mukashema, who passed away in July in the Netherlands, advised on a media strategy which would bring on board BBC Kinyarwanda Service and Voice of America (VOA) to help them spread their chosen story.

Rusesabagina, who faces nine terror-related charges stemming from FLN attacks in the south-western part of Rwanda between June 2018 and April 2019, withdrew from the trial in March. It is likely that the high-profile suspect feared that evidence obtained from Belgium would pin him on the alleged crimes, including the killing of at least nine people. https://twitter.com/MRCDUbumwe/status/1109312085849227265 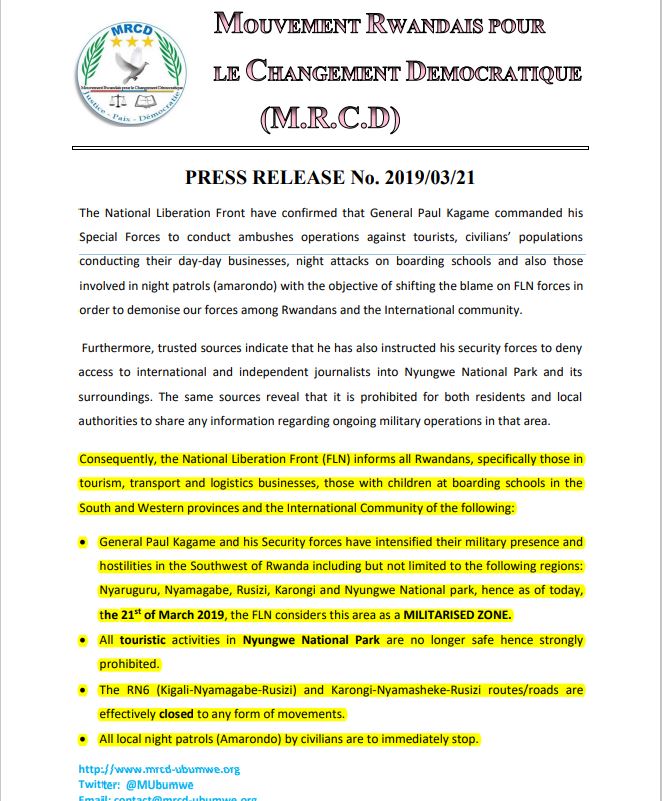 The trial continued with key members of FLN, including two former spokespersons, Callixte Nsabimana and Herman Nsengimana, who in their testimonies revealed the extent to which Rusesabagina was leading their group.

In the next articles, KT Press will detail how several renowned media outlets were complicit in Rusesabagina’s campaign targeting the Government of Rwanda.

The High Court Chamber of International and Cross-border Crimes is set to deliver a verdict in the trial of Rusesabagina and 20 others on September 20.