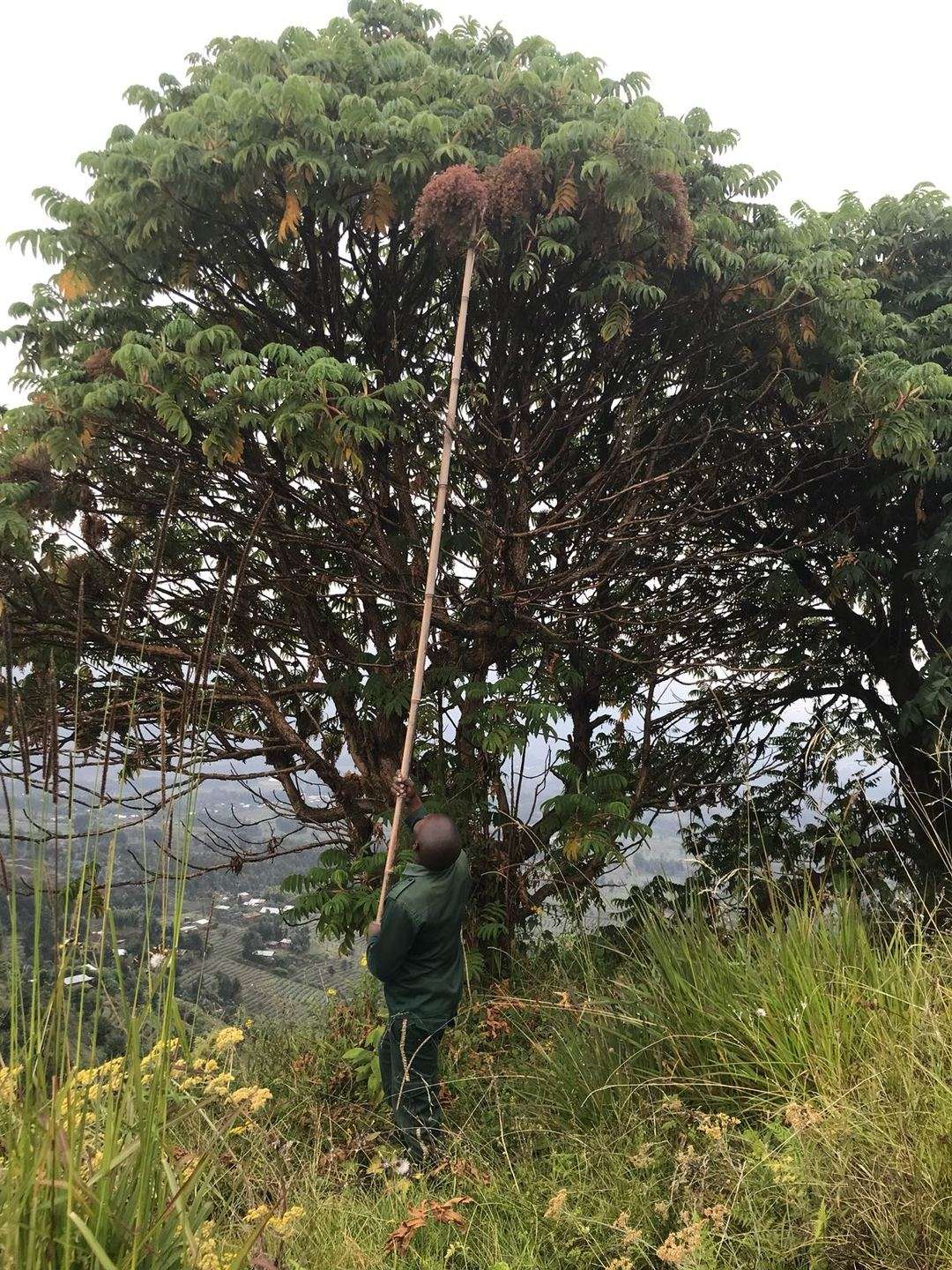 Rwanda Forestry Authority (RFA) has embarked on a new journey that will see the country engage farmers in rejuvenating an ancient Rwandan culture of planting indigenous trees.

The plan was announced on October 15, 2021 following research evidence that shows a reduction in the number of indigenous trees as farmers prefer planting imported tree species which mature and bring in cash money in less than 10 years.

The plan to plant 7 million trees (20% indigenous) will be implemented by Albertine Rift Conservation Society (ARCOS), with $4million funding from the Livelihoods Funds- a 20-year project called “Agroforestry for Livelihoods Project”.

This project is being implemented in collaboration with the Rwanda Forestly Authority(RFA) in two districts of Rulindo and Bugesera where at least 1 million trees were planted last year.

The main goal of this project is to build resilient ecosystems for carbon sequestration and to empower a network of community groups as champions of change for inclusive and sustainable livelihoods.

These trees take more than 20 years to mature and bear fruit, but culturally valued as a source of herbal medicine and were free for community use, however research has shown that due to financial needs many have, in time, been depleted for firewood.

Research by ARCOS shows community mobilization (Sensitization and Trainings, distribution of tree cuttings and establishment of Friends of Nature Association (FNA) groups and provision of incentives have been done.

However, KTPess found out from officials and forestry experts, academics, that with these efforts, a missing link towards attaining this goal has been seen on the lack of direct participation of farmers despite having a cultural sense of the importance of indigenous trees in Rwanda society.

To change this current situation and farmer’s mindset, a team of forestry experts met in Kigali this weekend to discuss ways to propagate indigenous tree planting and finding sustainable solutions for having farmers lead in the community initiatives.

This raised debate among experts as some blamed farmers for following money links and not being able to see the value of indigenous trees in the long run, however some blamed the gap in lack of a proper strategy, research and information dissemination among farmers.

“Farmers prefer trees with high economic value like eucalyptus. This is because of its good work with and has value for money but it exhausts soil moisture which can be dangerous to the environment,” said Dr. William Apollinaire, the Agro forest for livelihoods Project Manager.

Contrary to the fact that Indigenous species play a paramount ecological, economic and socio-cultural role, Apollinaire said that the biggest challenge has been to change the mindset of farmers to pick interest in planting indigenous trees, as they highly prefer non indigenous (Grevillea and Eucalyptus) which make quick profits in the short term.

However, Dr. Sam Kanyamibwa, Executive Director of ARCOS said it’s not fair to blame farmers but there is need to refocus on the engagement approach.

“Let’s not lie here, we have to combine the two elements and take time to build that partnership with farmers which will take time instead of doing it quickly for the sake of results,” Kanyamibwa said.

He added that farmers are friends of nature and they can invest in its diversity thus a need to spend time with farmers to show them the importance of this- in economics and land benefits instead of hurrying to attain a goal without impact.

“We have to show the farmer’s benefit when we talk of growth because we are not competing with anyone. Instead if we show them the long term benefits for generations (the package) then we will have a step made instead of saying they have a bad mindset,” Kanyamibwa said.

Vincent Nsabuwera from Enabel said that the implementation can be successful if the farmers are showed the direct benefits of planting indeginous trees, a point which Rwanda Youth in Agribusiness Forum (RYAF)CEO, Jean Marie Vianney Rwiliriza said is key especially looking at how COVID-19 positively changed perception herbal medicine and benefits and market.

“We need to strategize because the reality is that the herbal trees have a market and seen under covid-19 pandemic where sales increased because people sought herbal options for treatment,”  Rwiliriza said.

Experts called for extensive local research on the list of indigenous trees, creating team capacity building forums and engaging district officials in change of mindset and practice among farmers.

“We also need to have a market in place for the farmers so that when they plant and harvest the trees for medicinal purposes they can sell off,” said Fulgence Havugumubuzima, a lecturer in forestry at Integrated Polytechnic Regional Centre (IPRC) Kitabi.

Forestry Authority Director General, Jean Pierre Mugabo said that the first steps, in research, have been taken and with the project partnerships there will be synergy and increased inputs from government to engage the farmers as stakeholders.