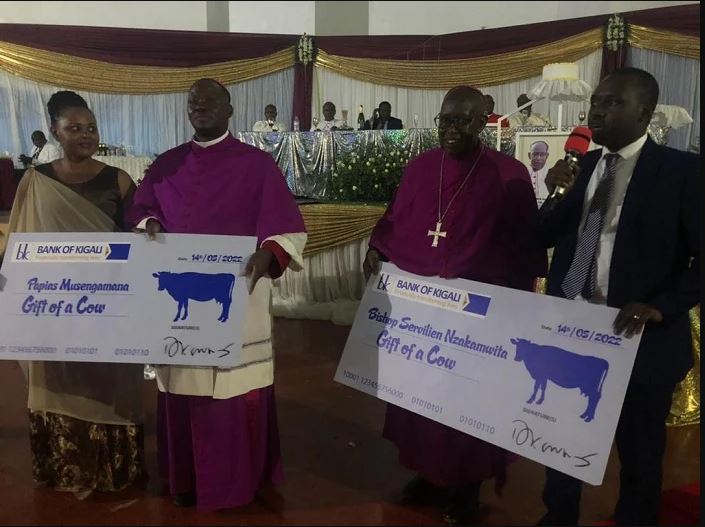 The Bank of Kigali (BK) Plc has donated a cow to the newly ordained Bishop of Byumba Monseigneur Papias Musengamana and his predecessor Servilien Nzakamwita.

Msgr Musengamana was ordained as Bishop of Byumba diocese this Saturday May 14, 2022 in a ceremony that was blessed by  Antoine Cardinal Kambanda and officiated by the Prime Minister Edouard Ngirente on behalf of the President Paul Kagame.

Donating domestic animal to a neighbor is enshrined in  Rwandan culture but the offer of a cow is highly regarded as a symbol of life, wealth and prosperity to the beneficiary.

Keeping this in mind, and wishing the same for the new and outgoing bishops, the Bank of Kigali handed over two cows to the religious men who are respectively considered as figures of spiritual and socioeconomic development in the Catholic Church and specifically to Byumba diocese where the Bank of Kigali has profound operations.

For the incoming bishop Papias Musengamana, BK said that the donation was to wish him good luck in his new duties and welcome his contribution to the diocese through working with the Bank of Kigali which aims at financially transforming lives of citizens.

For retired bishop Servilien Nzakamwita, the donated cow was as a way of thanking him for his collaboration with BK in financially transforming lives of Rwandans during his term of office and wishing him a fruitful retirement where he can everyday, have milk on his table from his gift cow.

And rightfully, during the ordination ceremony, the PM Ngirente cited activities in which the Catholic Church has played a significant role in the country’s development especially in education and health and stated that these developments are visible for everyone.

Ngirente stated that Catholic Church leaders like retired Nzakamwita have been at the fore front in advocating and ensuring the developments are implemented in due time.

For example, the PM said that Nzakamwitata will be remembered as an active Bishop and the one who promoted unity, spiritual growth of Rwandans.

He said that Nzakamwita also helped the diocese to get funding for the construction of Kizuguro referral hospital- which serves various communities in Byumba Catholic Diocese and beyond.

David Bizura, the Regional Business Manager at Bank of Kigali said that the Bank looks forward to working with the Diocesean leadership to sustain the existing business relationship, laid by retired Bishop Nzakamwita, in a bid to financially transform lives of citizens in the diocese.

In his retirement speech, Msgr Nzakamwita welcomed his successor but said that he is proud of his 26 years of serving the diocese which he took over with only four priests but is leaving it with 150 ordained priests, 170 consecrated religious men and women and 540 seminarians.

On top of this manpower, Nzakamwita also said that his is happy at the end of his duty with dignity.

“I take this opportunity to say goodbye and to thank the diocese which I served in hard times after the genocide, during times of doubt, fear and distrust but God helped us to work together through each moment,” Nzakamwita said.

Nzakamwita also said he is proud to have been able (with help of President Kagame) to repay a bank loan which he solicited to construct a church owned school (Mary Hill School) one of the education centers of excellence in the diocese.

On this clean record, and one pending construction project of Centre Imbabazi formation center, Nzakamwita asked the Christians in Byumba diocese to work closely with the new bishop to attain more than he did but also promised to stay around the corners and chip in to help within his abilities as a senior citizen.

Byumba diocese was established in 1981 as a break off diocese from Ruhengeri diocese. It has since then been served by three bishops-Msgr Joseph Ruzindana till 1994, Servilien Nzakamwita from 1996 -2022 and Papias Musengamana who took over the Pastoral Staff on May 14, 2022.