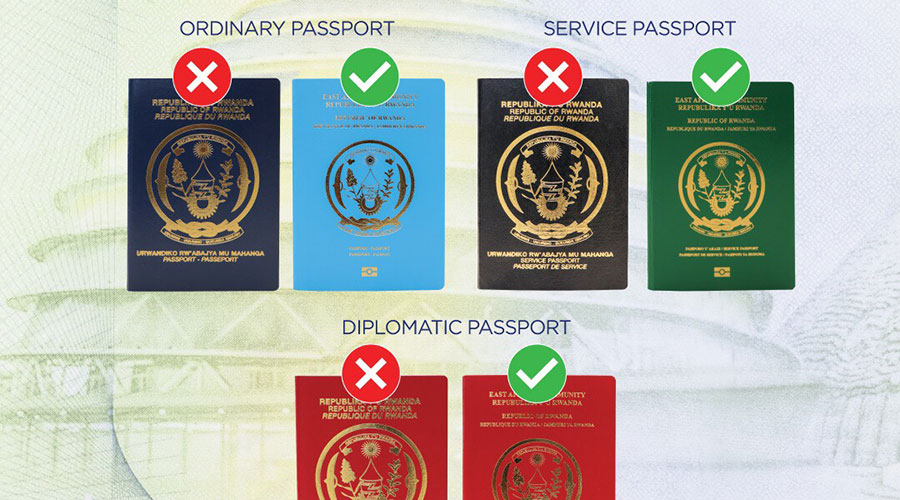 Rwanda has phased out non biometric passport which has been replaced by e-passport or electronic passport, common for all East African Community member countries.

“Machine-Readable Passports have been phased out and will no longer be recognized as valid travel documents in Rwanda. All Rwandans who wish to travel to countries where a passport is needed are required to have the new e-Passport,” Rwanda Airports Company wrote on Twitter yesterday.

An official announcement from the Directorate General of Immigration and Emigration (DGIE) says the decision to phase out Machine Readable Passports took effect from June 28, 2022.

“The Directorate General of Immigration and Emigration would like to remind the general public that the Rwanda Machine Readable Passport (old passport) has been phased out and ceased to be recognized as a travel document with effect from June 28,” the announcement reads in part.

Meanwhile, returning citizens with the non biometric passport will be allowed to return to Rwanda as they apply for a new passport.

The DGIE began issuing e-Passports in June 2019, and other East African nations like Kenya, Tanzania, and Uganda have followed suit.

Within two years of the first e-Passports being issued, EAC member countries were requested to phase-out the old passport.

According to DGIE, the e-passport is more secure because it features a microchip making it tamper-proof and can be digitally verified by other countries in the East African Community.

The e-passport is also recognized as among efforts established to fight against cross-border crimes including terrorism since it uses advanced technology that ensures that travel documents are used by legitimate persons and authorities.

Rwandans living in other countries can apply for e-Passports via the https://irembo.gov.rw/ portal. According to DGIE, the innovation makes it easier for Rwandans who reside abroad to obtain their East African e-Passports.

The applicants’ biometric data is captured from the nearest Rwandan Embassy to be used for the processing of both ID cards and e-Passport.

What is the price?

There are various types of e-Passports. A two-year ordinary valid e-passport costs Rwf25,000, while a five-year e-passport (with 50 pages) costs Rwf75,000

An ordinary ten-year valid e-passport is Priced at Rwf100,000 with 66 pages while the service passport of five year costs Rwf15,000.