Home NewsNational Where Are They Now: 100,000 Students, 6000 Teachers Did Not Report to School
National 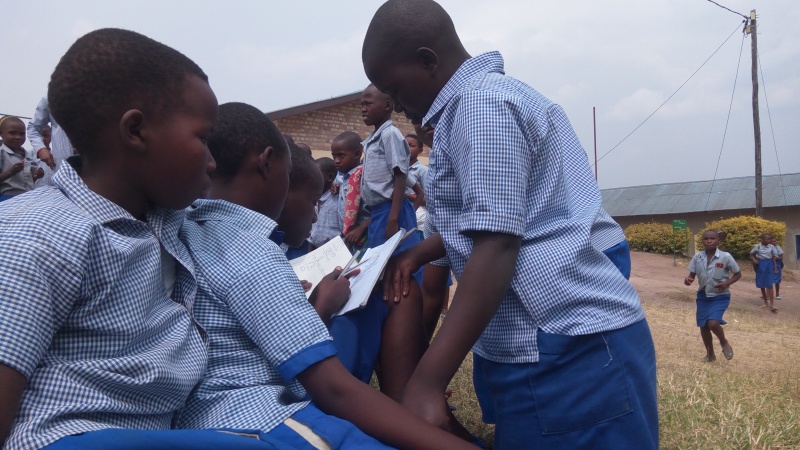 Students at Kazo Primary School are studying hard. However, some scores of students are not yet to school since the year started, one month ago

September 26-October 26, it is exactly one month since schools reopened doors for the academic year 2022-2023.

As some schools prepare to sit mid term exams,105,525 students and 5,939 teachers are yet to report to school.

The Ministry of Education (MINEDUC) announced on  Monday

On the public radio this Monday, the Director General of Education Sector Planning, Monitoring and Evaluation at the Ministry of Education, Christophe Nsengiyaremye said that 3,542,233 reported to school out of 3,647,758 students who were expected, thus 3% students who are still absent.

Those missing are mainly from secondary schools whereas nursery schools are fine.

The Eastern Province has the biggest number of absence with 4.4% of the total number while Southern Province is least absent with 0.7%.

Léon Mugenzi Ntawukuriryayo Head of Teacher Development, Management, Career Guidance and Counselling Department at Rwanda Basic Education Board (REB) said the journey to place teachers in schools this year was done before the academic year starts but some teachers met different challenges.

“When we deploy teachers in schools some of them do not report immediately because of many reasons, some say that the schools are far, others  lack required documents,” he said.

“Many teachers faced the challenge of having their criminal record certificate. There are also some teachers who passed the exam but do not have all the required documents as of now.”

He said that some of them did not received by the schools as they are still waiting for all required documents but the ministry advocated for them so that they can be engaged while they are waiting for their documents.

Mugenzi further said that another reason is that some teachers who refused to go where they were oriented because it is far from their home, reminding them that they belong to the country, not a specific district.

“We are still looking at ways the teachers that are still absent can be replaced,” he said.

“Students cannot have their degree before they graduate and it will take place on November 18. Meanwhile we give every finalist student other documents that show they have covered their studies. It is good to search for a job as soon as you finish your studies but when it comes to requirements sometimes you have to wait. The University of Rwanda has the program and the graduation should be prepared in harmony of all programs,” Kabagambe said.

He added that the university does its best to avoid any delay for people who want their degrees. But students from a particular program cannot change the whole procedure.

“They have to wait, maybe they will discuss the matter with the schools so that they be flexible,” he further said.

Regarding students who dropped out the school, provincial governors gave some reasons.

Dancille Nyirarugero, the Northern Province Governor said: “the absence was high in senior one and senior four, where some children from other provinces were delayed to reach their respective schools in Northern province. We are in a week dedicated to education; we keep on sensitizing students to go to school.”

Alice Kayitesi, the Southern Province Governor said: “We are at 0.7 absence rate, the lowest countrywide because the school feeding program is working well. We are in education week which helps to mobilize citizens.”

The Eastern Province Governor, Emmanuel Gasana said that he is happy that MINEDUC numbers conform to the province ones, and he hopes that the school feeding program will help them to bring back students who dropped out of school.

“The government put in place a school feeding program, and we hope that it will help us to bring back students who are absent. Five people have to work together on this matter; parents, teachers, leaders, other stakeholders, and security organs. We are looking for solutions to school drop out problem,” he said.

Francois Habitegeko, the Governor of Western Province said “We see the problem in secondary and in Technical and Vocational Education and Training (TVET) schools. We take this opportunity to remind parents that their children are missing lessons. We realized that there are some students who were affected to different schools, they said that are far, they still want to change those schools to be affected in nearby schools, but remember others are studying and they are missing lessons.”