Home NewsNational Rwanda-DRC: What Next After Luanda Summit? Will M23 Withdraw From Positions?
National

Rwanda-DRC: What Next After Luanda Summit? Will M23 Withdraw From Positions? 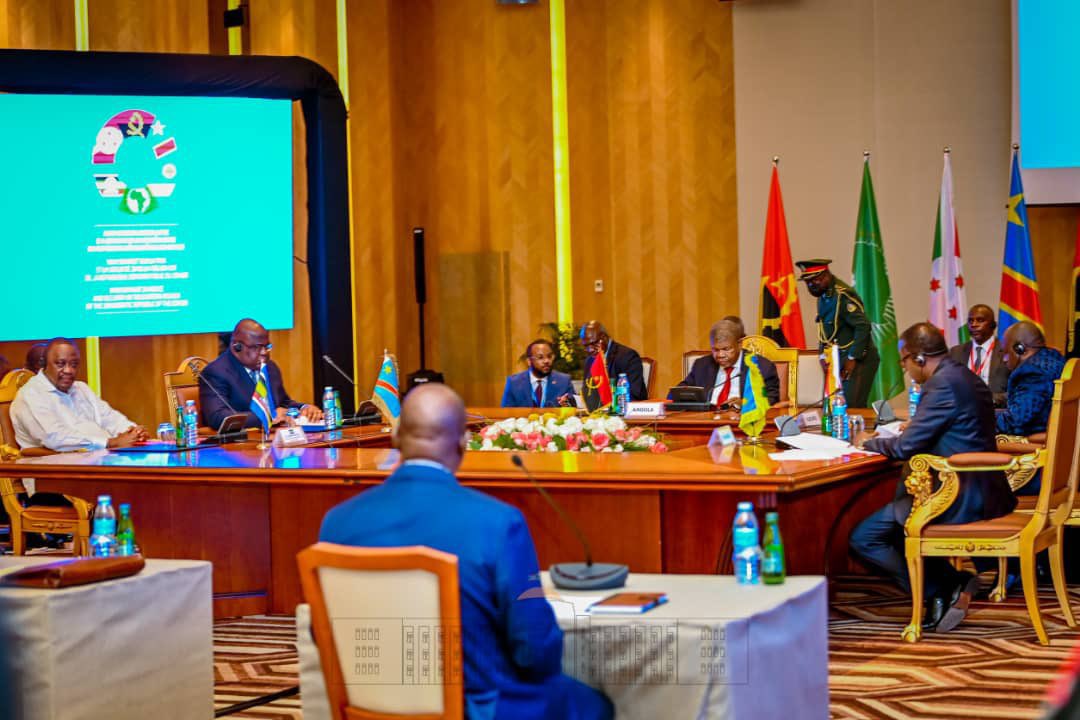 President of Angola chaired the Mini-Summit where Rwanda was represented by the Minister of Foreign Affairs, Dr. Vincent Biruta

A mini-summit held in Luanda, Angola on the invitation of Angolan President João Manuel Goncalves Lourenço, resolved that the M23 rebels withdraw from their positions within the next 48hrs to pave way to the cessation of hostilities in Eastern Democratic Republic of Congo (DRC).

The summit, chaired by President Lourenço, who is also the African Union Champion for Peace and Reconciliation in Africa and Mediator designated to maintain the dialogue between the DRC and Rwanda, made specific resolutions targeting M23.

The Luanda resolutions came the same day the M23 rebels warned that an imminent genocide targeting Kinyarwanda-speaking communities is being planned in the areas of Masisi by the Congolese government and other armed groups such as FDLR-FOCA and Mai Mai.

The summit in Luanda, was attended by Presidents Evariste Ndayishimiye of Burundi, who is also the current Chairperson of the East African Community (EAC), Felix-Antoine Tshisekedi Tshilombo of DRC, Rwanda’s Minister of Foreign Affairs and Cooperation, Dr. Vincent Biruta, who represented President Paul Kagame, the former President of Kenya, Uhuru   Muigai Kenyatta, who is also the facilitator appointed by the EAC for the implementation of the Nairobi Peace Process.

Also present was Michelle Ndiaye, Special Representative of the Chairperson of the AU Commission and Head of the AU Liaison Office in the DRC, Amb. João Samuel   Caholo, Executive Secretary   of   the international Conference on the Great Lakes Region (ICGLR), and Lt. Gen Nassone João, Commander of the Ad Hoc Verification Mechanism.

“The main Objective of the Luanda Mini-Summit was to establish a timetable for the implementation of priority actions, with a view to the cessation of hostilities and the immediate withdrawal of the M23 from occupied Congolese localities, and 10 coordinates agreed through the Luanda and Nairobi Processes,” a statement released after the summit reads.

Among other things, the statement adds that the Heads of State discussed the security situation in the Eastern region of the DRC and expressed their concern about the worsening insecurity and persistent military actions of the M23 and the acquisition by the M23 of increasingly sophisticated weapons and other means to carry out attacks against the Forces Armees de la Republique Democratique du Congo (FARDC) and the persistence of negative and terrorist forces in the eastern DRC, which constitutes a threat to peace, security and stability in the sub-region.

The Mini-Summit decided on the cessation of hostilities in general, and in particular of M23 attacks against the FARDC and MONUSCO from Friday, 25th November 2022 at 18h00 (Day Day), full compliance with the requirements of the Communiques of the EAC Heads of State Conclaves of 21st of April and 20th of June 2022 (Nairobi Process), the Luanda Roadmap of 6th of July 2022 (Luanda Process) and the conclusions of the Extraordinary Meeting of the Chiefs  of  General  Staff  of  the  EAC  Armed  Forces which took place in Bujumbura on 8th November 2022). 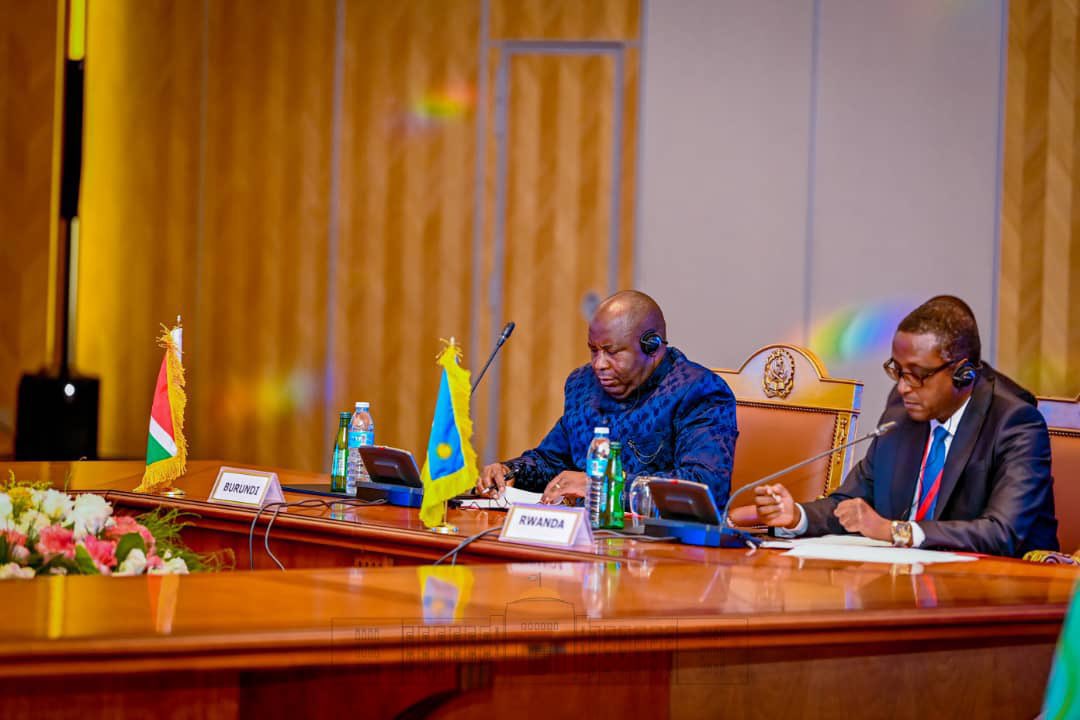 It also called for the continued full deployment of the EAC Regional Force, intervention of the EAC Regional Force against M23, as established in the framework of the Nairobi Process and the conclusions of the Extraordinary Meeting of the Chiefs of General Staff of the EAC Armed Forces, held in Bujumbura, on 8th of November 2022, in case of non­compliance by M23 to cease hostilities and withdraw from the occupied territories.

The leaders called for the “withdrawal of the M23 from the currently held positions and its return to its initial positions, as per the Extraordinary Meeting of the Chiefs of General Staff of the EAC Armed Forces of 8th of November 2022, held in Bujumbura, Burundi, under the control of the Regional Force and the Ad Hoc Mechanism in collaboration with MONUSCO.

As earlier discussed, Kenya will initially deploy its contingent in Goma, DRC and subsequently in Bunagana, Rutshuru and Kiwanja upon the withdraw of M23 to its initial positions not beyond the line along Sabinyo (DRC side), Bigega, Bugusa, Nyabikona, Mbuzi, Rutsiro nd Nkokwe.

“If M23 does not withdraw the EAC Heads of States shall authorize use of force to compel the group to comply,” the statement reads.

Among other things, the mini-summit agreed on the creation of the conditions for the occupation of M23 currently controlled zones, by 1he EAC Reg10nal Force, with the support of MONUSCO and the Ad-Hoc Verification Mechanism.

It also called for the cessation of all politico-military support to the M23, FDLR and all other local and foreign armed groups operating in Eastern DRC and the Region.

“FDLR-FOCA, RED-TABARA, ADF and other armed groups operating on Congolese territory shall immediately lay down their arms and initiate their unconditional repatriation under the terms of the Nairobi Process, with the support of MONUSCO, the Ad-Hoc Verification Mechanism and the EAC Regional force,” it says, with this expected on the 5th day of the process.

The summit also direct for the disarmament and cantonment of the M23 in Congolese territory under the control of the FARDC, the Regional Force and the Ad Hoc Verification Mechanism, with the collaboration of MONUSCO, the return of Internal Displaced People (IDPs) to their homes, resumption and continuation of political consultations between the Government of the DRC and local armed groups.

The mini-summit further called for resumption of bilateral dialogue between the DRC and Rwanda with a view to the normalization of diplomatic relations and the resumption of cooperation in two months. 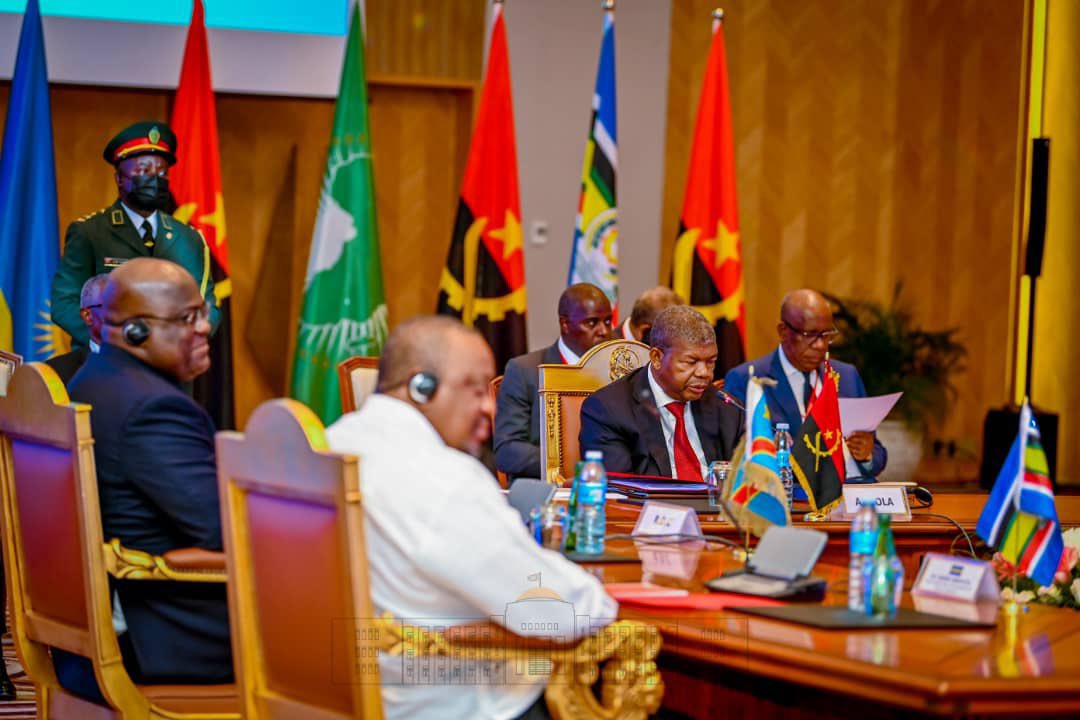 The Luanda meeting also called for the commitment of the parties to the implementation of the Luanda Roadmap and the agreements reached in the Nairobi Process and the EAC Chiefs of General Staff meeting and ensuring that all refugees return to their countries of origin, as referred to in the Luanda Roadmap.

The leaders called for a need of permanent coordination at all levels between the Luanda Process and the Nairobi Process and the Heads of State requested that the FARDC, the Regional Force and the Chiefs of General Staff (CGS) of the EAC Regional Force, in collaboration with MONUSCO, study all issues related to the disarmament and cantonment of M23 elements and submit proposals to them at their next mini­ summit.

The Heads or State recommended the acceleration or the implementation of the Disarmament, Demobilisation, Community Reintegration and Stabilisation Programme (PDDR-CS) underway in the DRC, expressed their deep concern about the conditions in which hundreds of thousands of displaced people are living in the war-affected areas or North Kivu province and launched an appeal to the International Community for humanitarian aid to those populations.

The Heads of State agreed to meet again soon in Bujumbura to evaluate the implementation of the conclusions of the resolutions and recommendations of the Luanda Mini­ Summit.

It is not yet clear if the M23 rebels will comply with the call to withdraw, having gained new positions in recent months, pushing back the government forces in what they claim to be self-defence.

The rebels accuse Kinshasa of reneging on a 2013 peace agreement which set conditions for them to lay down arms. They also accuse President Tshisekedi’s government of fueling ethnic violence targeting Rwandophones.

Rwanda denies backing the rebels and instead accuses Kinshasa of backing FDLR who are said to be fighting alongside FARDC in the ongoing conflict.

Hillsong London, Benjamini Dube in Kigali for A Live Show