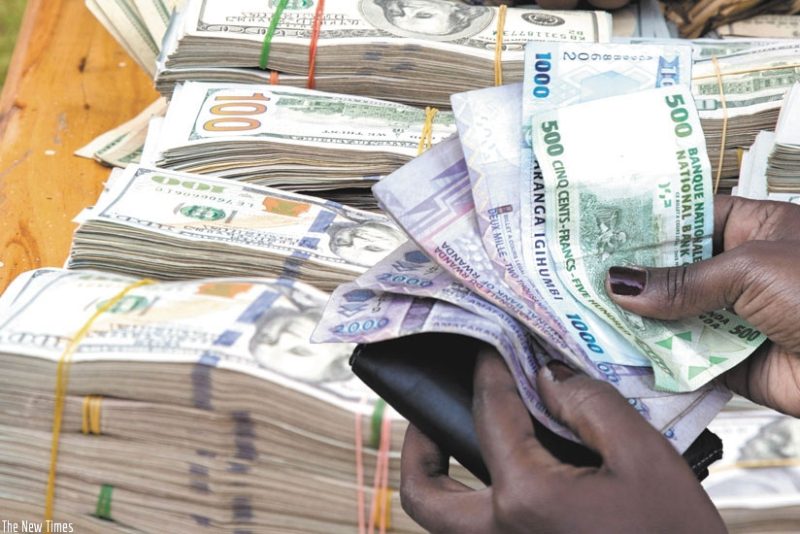 The National Bank of Rwanda (BNR) has revealed that issues of illegal foreign exchange and transactions in dollars remain prominent around the border towns of Gisenyi and Rusizi.

The bank has previously earmarked the city of Kigali as a leading area with activities of illegal forex transactions and transacting business in dollars instead of the local currency.

BNR is mandated to manage the foreign currency. It is through this mandate that the National Bank of Rwanda is in charge of regulating and supervising Forex Bureaus to ensure their compliance with laws and regulations.

This means that it is illegal for an individual or a company to transact in foreign currencies unless it is licensed by the National Bank of Rwanda.

The move by the central bank is aimed at reducing the impact of speculators on the dollar rate and consequent artificial shortages of foreign currencies on the market.

The Central Bank says that buying or selling foreign currency from street vendors is not allowed.

Apparently, In most incidences, although the dollar rate is published daily by the central bank, some operators hoard the currency leading buyers to source them from unlicensed traders.

Also among other challenges is the issue of landlords and some traders remain inclined or prefer pricing products and services in foreign currencies- which is illegal and can lead to penalties.

Penalties, in this case, can range from six to two years in jail and a hefty court fine depending on case by case.

Despite measures to curb such practices, Gérard Nsabimana, an Inspector at BNR says that the habits have cropped up in other major border trading towns especially in Gisenyi (Rubavu district) and in Kamembe (Rusizi district).

“We have identified the two border districts (Rubavu and Rusizi) as areas where there is a problem of business men and women from the Democratic Republic of Congo, who prefer to use dollar bills to transact business instead of exchanging money into francs,” Nsabimana said.

“This has resulted into cross-border traders preferring to do business in that way thus compelling many Rwandans to likewise transact in dollars,”

This situation according to BNR results into scarcity of forex on the local market and creates a superficial demand for the dollar in place of the local franc which is legally accepted as the mode of doing business and transaction in Rwanda.

Nsabimana said therefore the Central Bank will in the next days embark on educating the business communities in Rubavu and Rusizi but also seek engagement of local leaders in curbing the problem at hand.

Jean Bosco Tuyishime, the Executive Secretary of Gisenyi sector told Kigali Today that the local leaders are going to step up measures to solve the problem of illegal forex exchange and educating citizens on the need to use the local currency to do business.

Tuyishime said that one of the solutions at hand will be to create forex dealer cooperatives and provide them with legal operation documents within a month- this he said will reduce on the existing commotion in the forex dealers who are in most border towns seen operating in corridors along the border posts.

According to BNR regulations all forex dealers are supposed to be licensed and operate in designated business establishments such as forex bureaus, banks and other financial institutions.