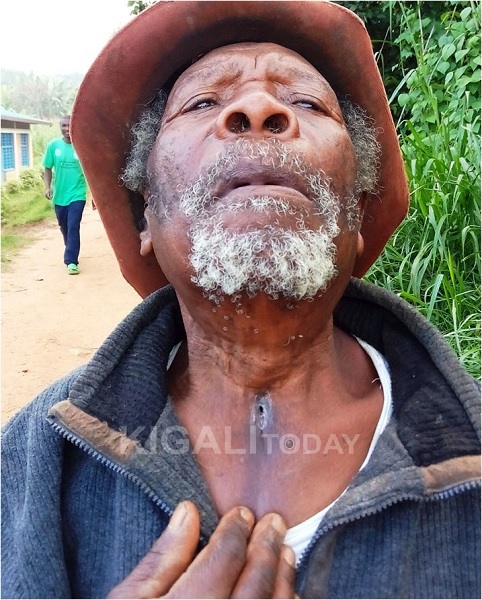 Petero Rukema, shows a hole pierced through his throat by FDLR militia

Petero Rukema, 89, was attending official duties as a village leader in 1998 when a dozen of gangs pounced on him in broad-day light in the remote Rusasa sector, Gakenke district, Northern Rwanda.

The criminals were members of the self-proclaimed Democratic Forces for Liberation of Rwanda (FDLR), an armed group that committed the genocide in Rwanda and now hiding in DRC jungles.

“They just grabbed me and said I had to pay the price for working with the government,” the tearful elderly man narrated to KT Press.  “Before I could figure out what was happening, they stubbed me in the throat.”

They ran back to the jungles when residents come to rescue the old Rukema.

Meanwhile, Rukeba was rushed to the nearest Musanze hospital, where doctors managed to keep him breathing and hospitalised for several months.

Unfortunately, while he was sick, the gangs come back and killed his wife.

“The pain I endured that time is so much. I wondered why those criminals were targeting a modest old man that I am,” wondered Rukema.

FDLR is composed of former ex-forces of a government and Interahamwe militia who collaborated to carryout  the 1994 Genocide against Tutsi.

After being defeated by the Rwanda Patriotic Front (RPF) Inkotanyi, they ran into DRC and in  1995 up to 2000, they kept infiltrating, especially in the Northern part of Rwanda, through a land border with DRC for killings and looting.

The insecurity distabilised the region for years and had to be stopped by a full military operation.

Through community policing, a system of sharing information between security organs and community was built to support existing security mechanisms.

“No more security threat in the Northern province as far as I am concerned,” Chief Inspector of Police Andree Hakizimana, police spokesman in Northern Province told KT Press.

Nevertheless, Rukema’s curse lives on and his wife’s ghost will haunt them until it finds eternal peace.

Over $76M Expected From Conferences Tourism In 2016