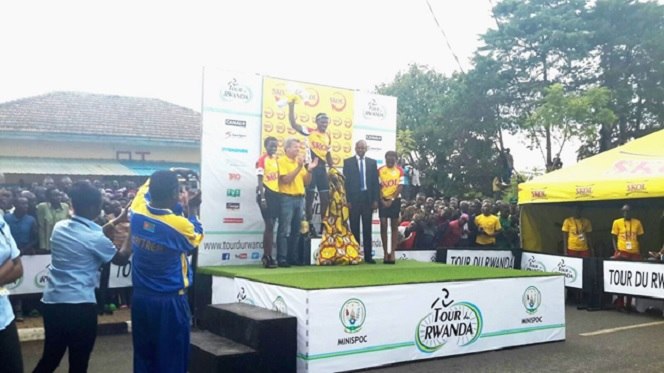 Debesay Mekseb from Eritrea after winning Stage4 of the ongoing Tour du Rwanda.

Debesay Mekseb raced perfectly the longest and also the toughest route, snatching the second win after taking the 119 km Nyagatare Rwamagana circuit, which makes him a redoubtable competitor to Team Rwanda which has strongly defended the Yellow Jersey.

Bosco Nsengimana of Team Rwanda, maintains the Yellow Jersey he grabbed after winning the prologue and the Kigali-Musanze stage.

Racers left Musanze at 8am and went through the meandering Musanze-Ngororero road, before a long ascension of numerous attacks to Muhanga, a secondary city in the Southern part of Rwanda.

The Same scenario was observed in the flat terrain of Muhanga-Nyanza highway, with each team craving for winning the circuit. Racers were so close, with each trying to find a narrow escape to the top.

Thousands of spectators along the road witnessed an excellent team spirit, with foreign teams believing it was time to grab the yellow jersey from Rwanda.

But all did not work as planned. Despite not winning the circuit, Team Rwanda is still on top with Jean Bosco Nsengimanaa leading the general classification with a difference of 1 minute and 14 seconds.

Second is Valens Ndayisenga who holds the 2014 title.

Rwanda team continues to play a strategic game looking forward to winning the 140 km Muhanga Rubavu stage tomorrow to remove all doubt on maintaining the title.

Aimable Bayingana, President of Rwanda Federation of Cycling, said yesterday after Rwanda won stage three, that, “Unless there is a surprising incident, it is clear Nsengimana will win this competition.”