Kenya’s Suleiman Kangangi and France’s Bescond Jérémy raced the gas out of every rider in the middle of the 120k Kigali-Huye route increasing their gap from 20 seconds, then to 50 seconds and then to about 3 minutes, crashing Team Rwanda’s hopes of reviving their encounter after yesterday’s Nyagatare-Rwamagana hurtful defeat.

Kangangi, who is participating for the 4th time, scared his counterparts riding so hard on painful hilly terrains leaving a massive gap; unfortunately he burnt his horsepower and missed out on all leading slots, as did France’s Bescond Jérémy.

Rwanda’s Nsengimana of Team Karisimbi remains leader in general classification and retains the yellow jersey after catapulting all racers and winning the prologue circuit and maintaining a fair position of 7 for stage 1 and 9 for stage 3.

Despite their impressive performance in the prologue race, Valens Ndayisenga and Janvier Hadi could not even smell the sweat of the first ten racers today, perhaps a strategy for Team Rwanda to exhaust their counterparts as 5 tiring stages remain ahead.

The encounter was characterized by multiple attacks. At one a Moroccan rider took a 10 seconds lead but Rwanda’s peloton aggressively chased and swayed him away, causing wild applause from thousands of fans along the highway.

As spectators thought the riders were all gone, a team of armature Rwandan riders of the cycling academy emerged. They are all along trailing their seniors along the meandering highway.

The race got intense on Huye hill 6 to 5km before the finish line. Swiss riders kicked in, thrusting into 27s gap ahead of Peloton draining its reserved gas.

Huye town was swarmed by spectators. Some climbed trees while others stood on top of tall buildings to get a closer look. Women were seen running from gardens rushing with their children to stage along the road.

Jubilation has engulfed Huye town as minds turn to the 3rd stage, the most difficult mountainous 95k Kigali – Musanze route. 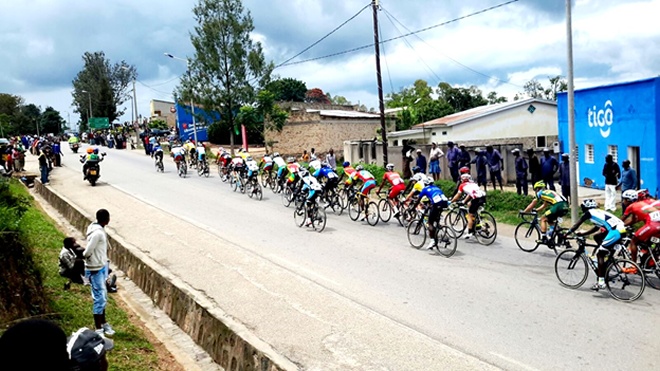