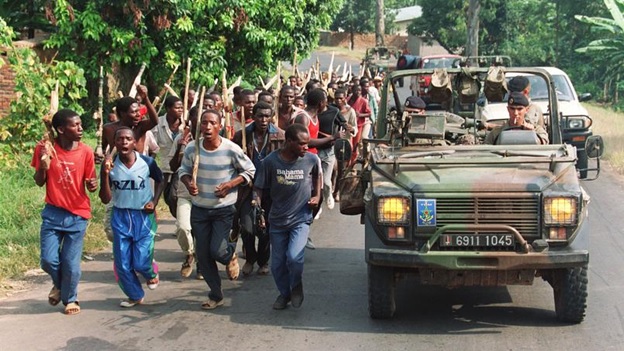 French commandos train Interahamwe militia on 27 June 1994 in Gisenyi. The trainings of thousands of militias had been ongoing since the early 1990s

Alain Juppe – the man who was France’s Foreign Minister during the 1994 genocide against Tutsis in Rwanda, today came out saying that pinning the genocide on France is a “disgrace and historical falsification”.

KT Press has obtained data from official engagements within the French government where Juppe was directly involved, evidence enough indicating that Paris was well aware of what was happening in Rwanda and actively participated.

On the evening of April 6, 1994, around 20:30 pm, President JunevalHabyarimana’s plane was shot down while landing at Kanombe (Kigali) airport.

Juppe swung into action – coordinated government in establishing military intervention that lasted from 9th to 12th April 1994 given the code name Opération Amaryllis.

In explaining the necessity of French commandos in Rwanda, Alain Juppé was more explicit in his rejection of an intervention directed at stopping the massacres of Tutsis: “Can France keep order in the whole world? Does she have the means and responsibility to stop, on the whole planet, people from killing each other?”

This refusal by the right-wing French government to intervene and stop the massacres in progress is based on an ethnic and tribal view of Africa in general and of Rwanda in particular.

In a confidential Elysee meeting, Prime Minister Balladur said; “They have always killed each other like that! Why do you want it to stop?”

France was the only country to collaborate with the interim government of President Theodore Sindikubwabo, although the latter’s role in the organisation and perpetration of the genocide was well established.

On April 27, 1994, three weeks after the start of the genocide, two Rwandan emissaries, Jerome Bicamumpaka and Jean Bosco Barayagwiza, were received in Paris at the Elysee and Matignon, whereas the United States and Belgium had refused them visas.

They held discussions with high ranking French leaders, notably the Prime Minister Edouard Balladur, the Minister of Foreign Affairs Alain Juppe and Bruno Delaye, head of the African desk in the Office of the President of the Republic .

Barayagwiza was then the director of political and administration affairs in the Rwandan Ministry of Foreign Affairs, as a radical ethnic extremist, a member of the leadership committee of the CDR and a founding member the RTLM, the instrument of genocide propaganda.

As for Jerome Bicamumpaka, he was a member of MDR power, and Minister of Foreign Affairs of the interim government. He was an extremist who would not hesitate to air out remarks full of hatred against Tutsis at the Security Council to justify perpetration of the genocide.

During their stay in Paris, Bicamumpaka and Barayagwiza went to the Rwandan embassy in France, dismissed Ambassador Jean-Marie Ndagijimana whom they blamed for not belonging to Hutu power, and changed the locks of the doors of the embassy to deny him access. They replaced him with the Chargé d’Affaires, Martin Ukobizaba, considered as more of an extremist than Ambassador Ndagijimana.

All these men were convicted by the International Criminal Tribunal for Rwanda on genocide.

According to human rights groups, the reason given by the French authorities for receiving the two envoys of the interim government with full honours was that it was necessary to “remain in contact with all the parties in the conflict”, and to finally declare that it was a question of a “private visit”.

Interviewed by Daniel Jacoby, president of FIDH, on the merits of meeting with that delegation, Bruno Delaye answered him that “it was better to talk to them rather than not” and added later on: “With Africa it is not possible not to soil your hands. It seems therefore that “at that precise time, the French authorities knew perfectly well with whom they were doing business with’’ and that they were ready to give them and the interim government political support through such visits. 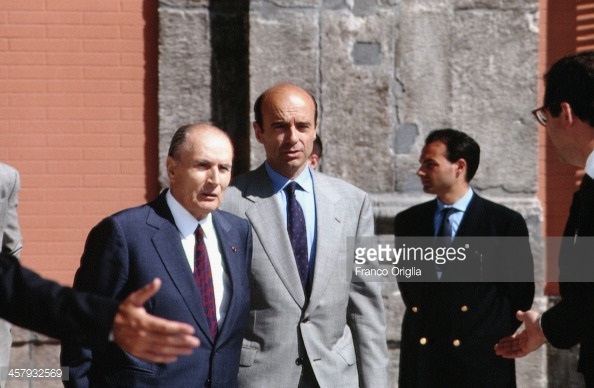 In the preceding part, we saw how France’s support to the interim government and FAR, which were busy committing genocide, never failed from April 7, 1994, date of its beginning.

At one time, some French officials began recognising the reality of genocide. Alain Juppé, the Minister of Foreign Affairs, acknowledged it on May 16, 1994.

Then on June 10, 1994, Alain Juppé, while responding to journalists who asked him if France intended to intervene in Rwanda, declared: “What would we go to do there? One thousand five hundred men would not manage to stop the massacres, especially since one of the parties, the RPF, rejects us”.

The emotion was at its highest on June 11, when Father Blanchard, talking on telephone from Kigali, was quoted in all the big television broadcasts of 08 O’clock on the big French channels. On June 13, the Rwandan tragedy was at the centre of the concerns of an OAU summit that was held in Tunis.

In the meantime, back from Kigali, on June 14, Father Blanchard, addressed a press conference covered by all the big French radio and television chains. He described the atrocities that the Interahamwe militia subjected to the children of his orphanage.

It is at that time that President F. Mitterrand confided in Edouard Balladur and Alain Juppé; “We must by all means do something; I entirely face up to my responsibilities”.

Disagreement at the level of the French executive

Was France’s involvement in Rwanda a war of re-conquest in favour of the genocide government or a military intervention with clear and limited humanitarian objectives?

The objectives of the French military intervention in Rwanda as well as its modalities of realisation were to oppose President Mitterrand and his Prime Minister Balladur.

The minister of Foreign Affairs, Alain Juppé personally got very much involved in the launching and publicity of the initiative. In a fairly special way, this Minister of the right wing aligned himself with President Mitterrand’s positions.

President Mitterrand’s project of intervention in Kigali itself was to divide both the town and the country into two and allow either a re-conquest by FAR, or force negotiations on the positions defended by the French army.

This French military intervention, in favour of FAR which was committing genocide, seemed to have been prepared for some months. Thus, SébastienNtahobari, the military attaché of the Rwandan Embassy, during the genocide, in a letter addressed to Paul Quilès gave an instructive retrospective clarification of the visit that Lieutenant-Colonel Rwabalinda paid to General Huchon, head of the military mission at the Ministry of Foreign Affairs.

Referring to the coded telephone that General Huchon entrusted to Rwabalinda for delivery to the Chief of staff of FAR, General Bizimungu, to “forward to Paris protected information for the security of French soldiers of Opération Turquoise which was being prepared.”

The information compiled above is based on data from various international investigations including the Parliamentary Commission of Inquiry (MIP) in France in 1998 and the Commission of Inquiry of the Belgian Senate in 1997.Alain Juppé is currently seeking to be President of France and is leading in the polls.