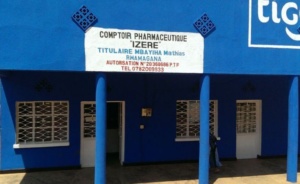 Mathias Mbayiha- a genocide survivor living in Rwamagana district in Eastern Province survived death after a suspect ambushed him at his Pharmacy.

Police, on Wednesday this week said the suspect, Michel Nyirishema, pretended as a sick person and went to Mbayiha’s Pharmacy in Rwamagana town for treatment.

On reaching at the Pharmacy, the suspect who had reportedly sealed off his private parts with a toothpaste-Colgate, asked Mbayiha to treat him privately in a Pharmacy’s sick bay.

Immaculée Mwizerwa, a witness who works near the victim’s Pharmacy says, “when the suspect was taken to the room for treatment, he removed a sword and threatened to kill Mbayiha.”

In the meantime, Mwizerwa heard her neighbor screaming from the room and rushed to check what was happening and found the suspect trying to hack Mbayiha. Fortunately, Tumukunde, one of Mbayiha’s assistants had already intervened and snatched the sword from the suspect before alarming Police that arrested him.

In an interview with Kigali Today, IP Emmanuel Kayigi-Police Spokesperson in Eastern Province said the suspect admitted he had been on a plan to kill the victim for over 19 years.

Kayigi said the suspect admitted he wanted to revenge against the victim whom he accused of being a witness against him in a genocide case he battled and ended up serving 19 years’ imprisonment.

According to article 140 of Rwanda’s penal code, the suspect faces up to life imprisonment if found guilty of attempted murder.

Butaro Hospital Designer to Be Awarded in US