Kenya has announced its resolute decision to withdraw with immediate effect its troops deployed in South Sudan in response to the dismissal of Kenyan Lieutenant General Johnston Mogia Kimani Ondieki, Force Commander of the United Nations Mission in South Sudan(UNMISS).

With 1000 troops, Kenya is among the top contributors of peace keepers in South Sudan as well as Rwanda with more than 800 troops.

Ondieki has been dismissed by Ban Ki-moon, the UN secretary general following an “Independent Special Investigation into the violence which occurred in Juba in 2016 and UNMISS response.”

The investigation team was commissioned on August 23 by UN and its findings were published yesterday-November 1 suggesting that UNMISS “failed to protect civilians during the violence that occurred in Juba between June 8-11.”

The findings read in part that the violence “caused death of many civilians, two peacekeepers, and the collapse of the fragile peace agreement between the President of South Sudan, Salva Kiir, and his former First-Vice President, Riek Machar.”

Investigators who were led by Dutch national Major General (ret) Patrick Cammaert attributed the ‘shortcomings’ to “lack of leadership on the part of key senior Mission personnel which culminated in a chaotic and ineffective response to the violence.”

They reported “delayed or no response at all, a fragmented security response” among other shortfalls related to poor military tactics.”

The UN secretary general’s office said today it was in touch with Kenya to discuss a replacement of their own General.

A communiqué from Kenya’s Foreign Affairs Ministry this evening confirmed the information but said, the “wrong action” of dismissing General Ondieki is not prudent because it only singled out one individual, while ignoring a fundamental problem within the mission.

“What is clear is that UNMISS suffers structural and systemic dys-functionality which has severely hindered its ability to discharge its mandate since its inception,” reads the statement.

Kenya considered the decision to dismiss its General as “lacking transparency much as it did not involve any consultation with the government of Kenya.”

The country took three decisions; to reject the decision to dismiss Lt General Johnson Ondieki, to withdraw immediately Kenyan troops currently in deployment in South Sudan and discontinue plan to contribute to the Regional Protection Force, and to Disangage from South Sudan Peace process.

Unmiss has 16,000 troops who were deployed in South Sudan since 2013 following fighting that escalated between President of the young republic Salva Kiir, and his former deputy, Riek Machar. 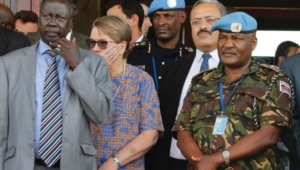