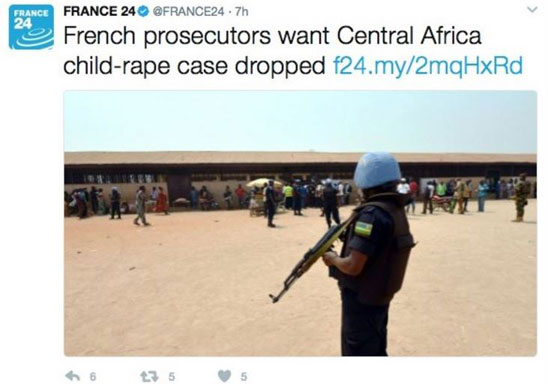 French broadcaster France24 has provoked angry reactions in Rwanda for the third time using photos of Rwandan security forces for a story on sexual abuse by French soldiers in Central African Republic (CAR).
France24 was reporting about latest development in the controversial case in which a UN investigation found French soldiers had abused girls as young as 10. In a new twist to the case, the French government wants all probes into the case abandoned.

Six French soldiers are said to be involved. But when France24 published the story from AFP, it used a photo of a Rwandan policeman.

On Twitter, the reaction this morning has been of shock and dismay. A hashtag #SomeOneTellFrance24 is doing the rounds.

#SomeoneTellFrance24 to find better ways to defend the myth of "honneur de la #France" than to use #Rwanda in #France's child rape scandal.

#SomeoneTellFrance24 that when their President @fhollande was in Central Africa, #Rwanda Peacekeepers were in charge of his security. pic.twitter.com/ubILuGDlbK

#SomeoneTellFrance24 Rwandan Peacekeepers operate under floods to save lives while French troops are abusing children in #CAR pic.twitter.com/TCYrVN76WB

Since the sex abuse scandal erupted, France24 and RFI radio have used photos of Rwanda security forces in their stories on several occasions.

Rwanda and France remain in a cold as the establishment in Paris is accused on involvement in the 1994 genocide. French commandos raped Tutsi girls and women, supplied weapons for the militias and opened safe corridor for the government, its army and militias – leaving a completely devastated country.

Both France24 and RFI are funded directly by the French government.

Several hours later, France24 deleted the tweet in question and also removed the photo of Rwandan police officer from the news story on its site. A new campaign has been launched demanding more: an apology.