The City of Kigali has abandoned the ‘less’ expensive cobblestone roads project and switched back to tarmac – barely a year after the much prized program was unveiled.

City authorities had planned to construct at least 105 kilometers of cobble stone roads, which last for about 500 years in selected settlements.

The project, announced 3 years ago and only started last year, would cost Rwf38.7billion ($46.9 million), according to officials at City of Kigali.

The City of Kigali had set next year – 2018 as the deadline for the new cobblestone roads to be fully operational. Two roads at Kisimenti with less than five kilometers were paved with cobblestone.

However, in an interview with KT Press, Bruno Rangira, City of Kigali Spokesperson yesterday said the project floated after lacking cobblestones as expected.

“These roads will be replaced with tarmac roads after the contractors failed to get suitable stones,” he said.

Rangira added that “the companies failed to get suitable stones that can be crushed and shaped by machines.”

Mathematically, five kilometers of cobblestone road can be constructed at the same cost of a one kilometer road of asphalt concrete.

According to engineers, constructing one kilometer of tarmac road in Rwanda costs more than $1.5 million due to the hilly nature of the country. 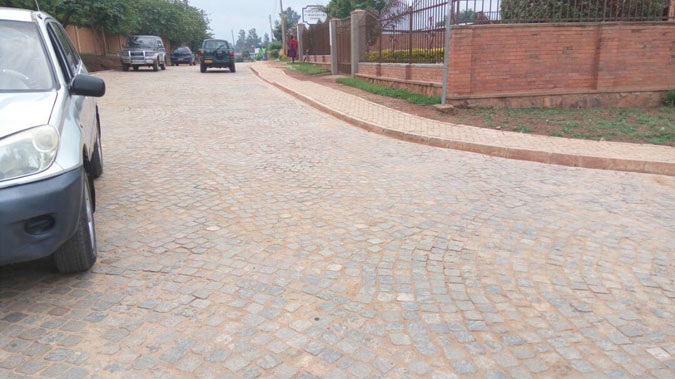 With failed 2016 proposed stone road project, officials at City of Kigali told KT Press that companies initially contracted to execute construction will continue with the new project without any increment.

“The new project will cost Rwf39 billion. This was the same budget that was initially planned for cobbled roads,” said Rangira.