World Bank senior advisor Dr. Ngirente Edourd is the new Prime Minister, whose name was released Wednesday mid-afternoon. As KT Press reports, a review of previous holders of this office in relation to the new appointee suggests the President is breaking with what had become the norm; pick somebody from the establishment.

As the process of choosing a presidential candidate for the Rwanda Patriotic Front (RPF) got underway several months ago, the party machinery had already settled on incumbent Paul Kagame. And in several party Politburo meetings, Kagame made it clear he would accept to stay on condition the party and country were ready to “do things differently.”

In media interviews days before the election campaigns got underway, Kagame was asked what frustrates him – to which he explained in details he had been adamant to divulge previously.

He said there was slow implementation of government plans. For most of the time, those charged with putting into action decisions actually had forgotten when asked for update. Put to him why he was not doing away with such people, Kagame said he could end up with no people to work with if he acts with such strictness.

The outgoing Prime Minister Anastase Murekezi named in 2014, is from the Social Democratic Party (PSD), had prior to his appointment been in cabinet for years. During the campaigns, Kagame told his supporters that after August 4th (election day), the country will change gear to “full speed”. Throughout the three-week campaign period, he said what had been achieved was insufficient. At some point in Ngoma district, Kagame took responsibility for not uplifting Ngoma town. He vowed a new face for Ngoma.

At the RPF headquarters on the night of August 4th, Kagame called to the podium a team of about 100 young people whom he said were very instrumental in his re-election. Kagame spent several minutes speaking about their role and linked it to youth ability to change Rwanda. In the inauguration speech on August 19th, Kagame also spoke about youths and what was in store for them. All the signals have suggested Kagame was going for what many called “new blood”.

Today, 44 year-old Dr. Ngirente Edourd came as a complete surprise. Commentary on social media showed media and ordinary Rwandans frantically searching for details about the new PM-designate. The economist and statistician joined what was previously the National University of Rwanda (NUR) in 1996. From then, up until 2010, he rose from student to lecturer after obtaining his doctorate in economics at Belgium’s Université Catholique de Louvain.

Dr. Ngirente worked as Director General in charge of planning in the Ministry of Finance. Within months, he was elevated to senior advisor to the same ministry. On March 30, 2011, a cabinet meeting held on that day granted him indefinite leave from work. It emerged he was moving to the World Bank. He has since been senior advisor to the Bank’s Executive Director from this region including Rwanda. 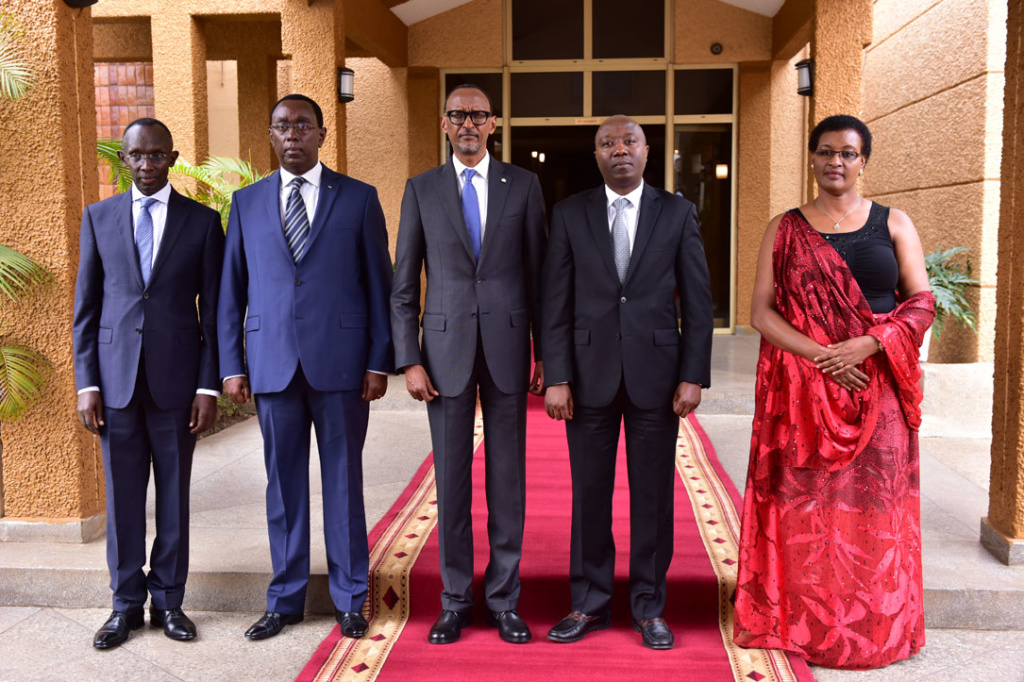 Shortly after taking oath, Dr. Ngirente took to the seat designated for the Prime Minister next to the Speaker of Parliament.

In speech after taking oath of office, Kagame said, “I want to start by thanking Edouard Ngirente for accepting to serve his country as Prime Minister.”

“Our government is about being inclusive. Our aim is to ensure that every Rwandan feels represented by their government,” Kagame said.

Kagame thanked his outgoing Prime Minister Anastase Murekezi. “Thank you for all your hard work and all that you have contributed to move this country forward.”

Meanwhile, Kagame announced the searing-in ceremony of the new cabinet will be tomorrow at the parliamentary building in the capital Kigali.