Tea growers and residents in Nyamasheke and Rusizi districts have resolved to begin consuming their own tea instead of imported tea.

“It’s unbelievable. We only drink our own tea in hotels in Kigali.  A cup of tea costs more in hotels yet I can have the same cup here locally without having to travel” said Emmanuel Nzayisenga one of the tea farmers.

“After considering validity of tea farmers complaints, we agreed that part of processed tea will be sold to farmers and the rest exported as usual,” said Azalias Niyibizi, Assistant Tea maker Shagasha Tea Company.

A kilogram of high quality Rwanda Mountain tea costs Rwf2500 but farmers in these areas will be able to get one at Rwf2200 per kilo.

Tea is Rwanda’s second most significant export earner providing income to more than 30,000 smallholders and 60,000 households across 11 of the 30 districts in the country. These smallholders produce more than 65% of Rwanda’s tea. 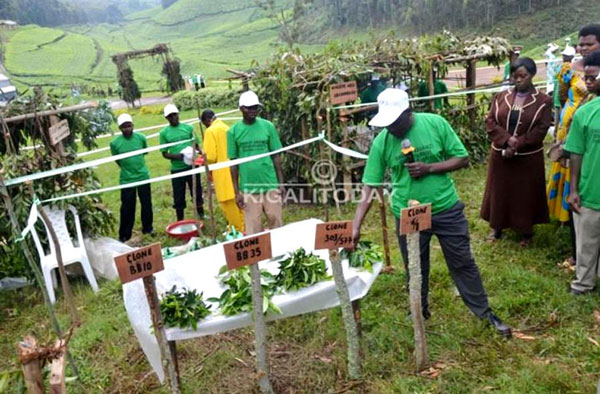 However, according to the Central Bank’ monetary policy and financial stability statement, Rwanda, tea production decreased to 14.28 thousands of tons between January and June, compared to 14.32 thousands of tons in the same period in 2015.

Tea earnings also declined to $ 36.14 million in January-June this year, from $ 38.33 million in the same period last year.

Despite the decrease, Rwanda is hoping for the better.

In 2016, A Scottish investor Sir Ian Wood, acquired a major stake in two Rwandan tea factories – (55% shares and 60% shares in Mulindi and Shagasha tea factories respectively) pledging to double the country’s tea production in the next two years.

His foundation is working with more than 17,000 smallholder tea farmers from Northern and Western province respectively.

The billionaire is expected to launch two more projects that consist of planting 8000 hectares of tea in Munini-Nyaruguru district and Rugabano-Karongi district of southern and western province respectively.

In May this year, Rwanda signed a tea commercialization contract with Unilever, a British-Dutch multinational consumer goods company.