If you have been waiting to see the official inauguration of a once much anticipated first ever Biodiesel project in Rwanda, you might have to wait longer.

Government says it has halted a project that would see the country have the first ever biodiesel-powered bus in Africa hit the road.

However, the project has been discontinued, due to several economic implications, a government official confirmed to KT Press on Monday.

“The project was discontinued as it was not economically viable,” Kampeta Pitchette Sayinzoga – Director General of National Industrial Research and Development Agency (NIRDA), told KT Press in a text message.

It was in the morning on March 27, 2011, when then Rwanda’s Minister of Forestry and Mines, Christopher Bazivamo, Permanent Secretary in the Ministry of Education, Sharon Haba and Jean Baptiste Nduwayezu, Director General of Institute of Scientific and Technological Research (IRST), joined journalists and staff aboard a biodiesel-powered bus.

The first biodiesel-powered bus in Africa was making its maiden trip from Kigali to Bujumbura via Huye-Akanyaru in Southern Province.

The bus would then hit the road using 100 percent biodiesel – a trend that was expected to boost environmental protection.

Rwanda entirely depends on fuel imported through either Kenyan or Tanzanian ports. According to 2015-2016 fiscal year, the country imported 326.2 million Litters of fuel, up from 218.6 million Litters in 2011. 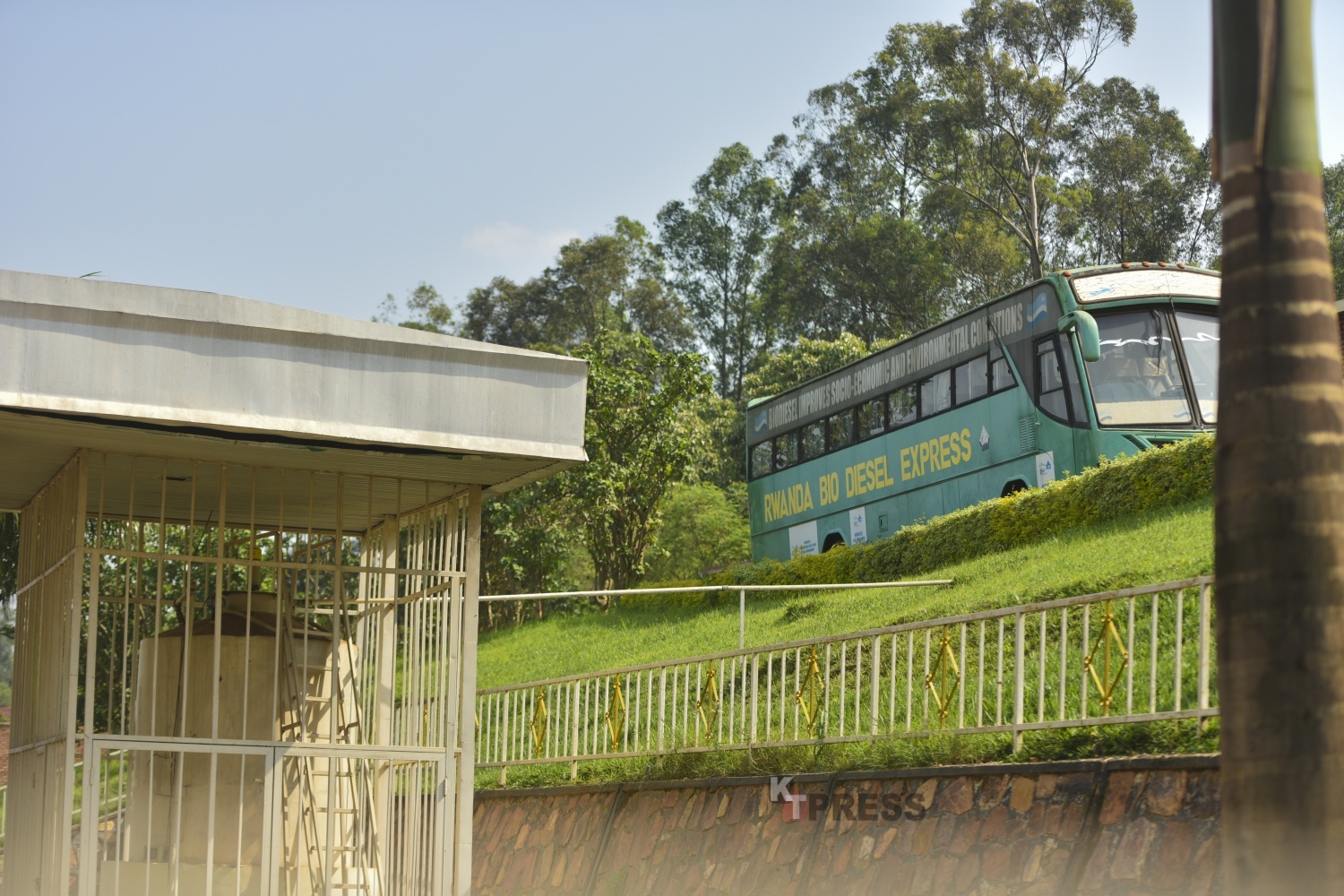 Uphill: The biodiesel bus and downhill: the biodiesel refilling station in the abandoned projectAt the time of the bio-diesel project, government, apart from producing an environmental-friendly diesel, was planning to cut down on fuel imports.

At the time, over 5.2 million trees had been set to be planted around the country.

More than 20 hectares of land with 34,000 jatropha trees were also scheduled to be planted around Lake Ruhondo in Burera district, Northern Rwanda, directly benefitting local farmers.

The raw materials from the trees would then be processed to produce biodiesel to serve the project. However, for the past few years, one real bus that made a return trip has been seen parked at the former IRST- offices at Mulindi in the outskirts of the capital Kigali.

KT Press toured the site early this month – only to find a security guard at the entrance. There was no staff seen at the offices.

The bus was left inside the compound. It is parked adjacent to the only biodiesel refilling station of Africa whose tanks were never filled.

While initiating the project in 2007, government was expecting the project to initially produce 2,000 litres of bio-diesel per day with projected target of producing 48.000litres by 2025.

Kampeta Sayinzoga who was not there when the project started did not divulge more into what could have pushed back the project. But KT Press understands that most of the products like palm oil used to produce the biodiesel were also imported.

“The importation of these products was too costly and jatropha tree planting project had failed,” said a former IRST employee who spoke on condition of anonymity.

The former employee adds that the projects, which stopped operations around 2012 – just a year after the bus had made a maiden trip, said failed due to multiple planning difficulties.

“It was discontinued simply because of poor planning. After all, a liter of biodiesel would cost Rwf1000 which was not different from the imported fuel. The climate in Rwanda was also not favorable for jatropha trees,” said the source.