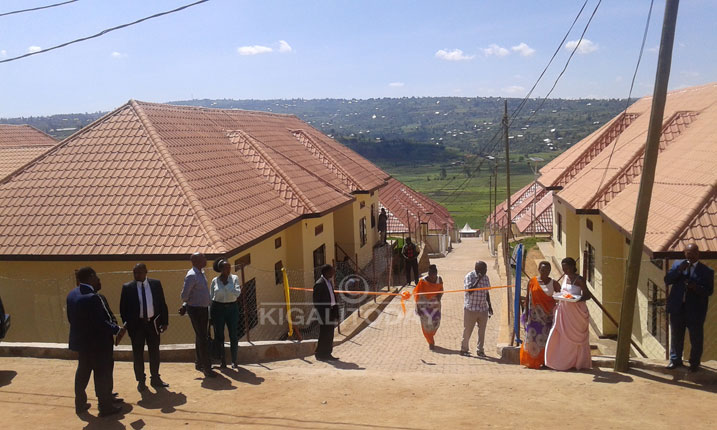 Housing units developed by the ex-combatants in Masaka – Kicukiro district. Similar houses-four in one could be an option as Kigali plans to relocate households in high risk zones

Rurangwa Innocent, a resident of Mount Rebero, Nyarurama cell, Kabeza village in Kicukiro district has always watched his family land carried away by erosion, and he sometimes lost property to landslides.

Every rainy season, Rurangwa 40, father of four is concerned about the life of his family.

“When it rains, we start looking for where to spend the night because running water evades the house including destruction of our crops,” Rurangwa told KT Press on Monday.

“Am always under pressure when it gets cloudy giving signals of raining.”

However, Rurangwa says the government in the previous years helped them to dig pits as a water harvesting mechanism.

However, an answer to Rurangwa’s concern could be on the way coming.

The city of Kigali is conducting a survey to demarcate households located on 5336 hectares that were identified as high risk zones and whose occupants need to be relocated.

According to Bruno Rangira, the City of Kigali spokesperson, the demarcation that kicked off last week – February 22nd will reduce disaster fatality and losses.

Affected areas are Mount Jali with 2,328 hectares in high risk, Rebero hill with houses established on 1,350 hectares of high risk and Mount Kigali with a high risk zone of 1,658hactres.

The demarcation being implemented by Rwanda Housing Authority (RHA) will be done in two phases with phase one taking 15 days.

The phase one will include demarcations of non- habitable (High risk zones) area on Jali, Kigali and Rebero hills (slopes greater than 30%), identify number of house units and plots with and without land documents and construction permits.

It will also estimate cost of properties (Houses and plots) identified which will help in budget estimation of those to be affected.

The second phase will come up with the actual cost of properties, identify relocation areas and develop compensation model.

Previously, the City of Kigali gazetted land for model villages for vulnerable residents, and families from high risk zones at Rusheshe and Masaka in Kicukiro district, Gikomero in Gasabo district and Mageragere in Nyarugenge district.

The second option mainly works when property expertise in the affected area indicated that affected residents have low value properties.

In this second phase, the city of Kigali will determine the size for the afforestation, population, types of trees to be planted in the areas allocated.

The city of Kigali defines High risk zones as areas whose slope is above 30%.

These high slopes result in the degradation of soil and forest degradation.

Degradation of hilly terrain of Mount Kigali, Jali and Rebero has increased the risks of erosion and devastating flooding downstream specifically in Nyabugogo, Gatsata area and Nyabarongo valley.

According to the survey carried out in 2015, families and small businesses in high risk zones of Gatsata and Nyabugogo experienced losses estimated at more than Rwf500 Million.

With Kigali City’s 1.2 million people, the new housing demand in the City of Kigali is estimated at 344,068 dwelling units between 2012 and 2022, and more than 60% are needed for low and middle income earners.