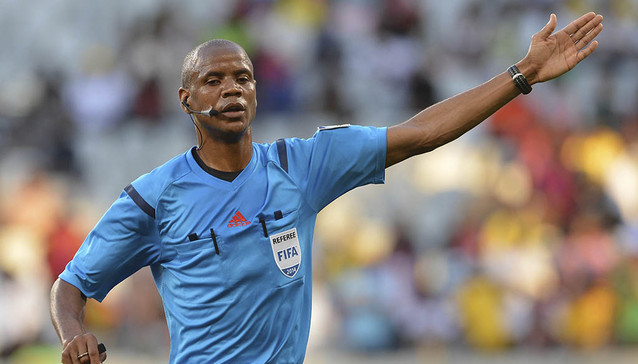 Zambian referee Janny Sikazwe has been appointed to steer the affairs of the first leg of the 1/16thround match of the CAF Champions League between Rayon Sports Fc and South Africa’s Mamelodi Sundowns scheduled for March 7 at Amahoro Stadium.

Rayon Sports Fc will face Mamelodi Sundowns in the first leg which will be played under floodlights on Wednesday, March 7, 2018, 18:00 at Amahoro Stadium.

Sikazwe, 38, has risen to become one of the foremost match officials on the continent since attaining international status in 2007.

Present at the finals of every Africa Cup of Nations since 2012, the highlight of his career was officiating the final of the 2017 edition between Cameroon and Egypt in Libreville, which the former won 2-1.

For the CHAN, he made his debut at the 2014 edition in South Africa, and two years later in Rwanda.

Sikazwe will be assisted by Jerson Emiliano Dos Santos from Angola and Romeo Kasengele from Zambia while Kasokota Kafuli Derrick from Zambia is the reserve referee. The match commissioner will be Joseph Tokyo Itumeleng Modise from Botswana.

In another development, APR Fc will play away in Bamako against Djoliba AC De Bamako on March 17in the first leg of the CAF Confederation Cup.

The game which will be staged at Stade Modibo Keita in Bamako at 17:00will be handled by Cape Verde referees led by Delgado Fernandes Wilson Jorge and Luis Fernandes Barbosa while Manuel Antonio Timas Mendes is the reserve referee. Amar Bahloul from Algeria is the match commissioner.